A snapshot of the 73rd annual CFT Convention 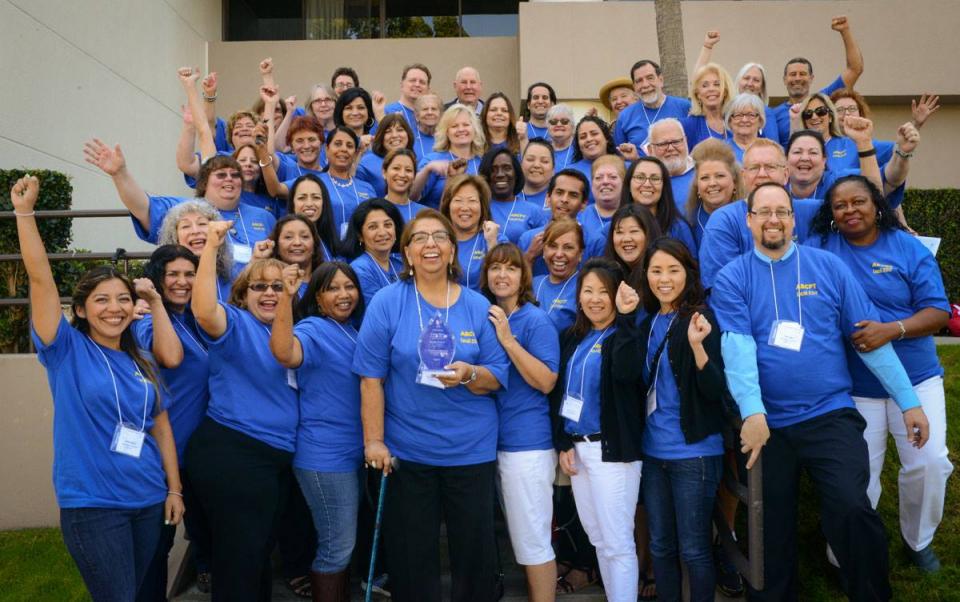 “Inspiring and well organized,” was how AFT 2121 President Tim Killikelly described the 73rd annual California Federation of Teachers’ Convention, held over the weekend of March 20-22 in Manhattan Beach.

Five hundred convention delegates—K-12 teachers, early childhood educators, community college instructors, classified employees, and UC librarians and lecturers—from all corners of California got the opportunity to discuss and debate the issues facing public education and our communities, and to decide union policy for the coming year. They attended workshops, heard from elected officials and education experts, and voted for the leadership that will steer CFT’s efforts for the next two years.

A strong list of distinguished speakers provided information and entertainment.

State Superintendent of Public Instruction Tom Torlakson noted the importance of renewing Prop 30 “or something just like it” so that we can continue to restore programs cut during the Great Recession. He criticized those who “unfairly blame teachers for the problems in public education.”

State Controller Betty Yee thanked CFT for putting Prop 30 before the voters. She credited the measure with California’s current budgetary stability, and shared her own story to emphasize its importance, since as an immigrant she did not speak English when she arrived in school and the San Francisco schools became her lifeline. She noted that economic opportunity for all doesn’t happen without school, the great equalizer, and without Prop 30, it was much harder for schools to play that critical role.

Another convention highlight was the appearance of former Oakland high school teacher and San Francisco State professor Jeff Duncan-Andrade, who shaped his presentation around rapper Tupac Shakur’s poem, “The Rose That Grew From Concrete.” In a wide ranging, challenging and sharp edged talk, he spoke to the need to meet low income students where they are. He spoke of the varieties of Post Traumatic Stress Disorder (PTSD) faced by low-income students, and showed the data that found that one in three had experienced some form of trauma producing PTSD and compared it with that of combat veterans, which the Pentagon pegs at one in six.

The crowd appreciated his critique of the corporate takeover effort, focusing on Pearson, the giant publishing company. Duncan-Andrade got everyone to agree to shout out “Pearson!” whenever something in the presentation went wrong, which people continued to do during the convention long after Duncan-Andrade had left.

The convention heard from Cruz Batista Salvador, one of several family members of forty three Mexican students “disappeared” last year. He described the struggle to find out what happened to these students in the context of draconian education reforms. The students had been protesting the reforms.

Carl Williams, Southern California vice president of the Council of Classified Employees, received several standing ovations during his presentation on the often overlooked role of classified employees in providing quality public education. His talk concluded with a list of jobs performed by classified employees, as the stage in front of him filled with delegates who do that work, each wearing a hat to symbolize “we wear many hats.”

State of the Union

In a detailed, wide-ranging and passionate State of the Union address, CFT President Joshua Pechthalt reviewed the accomplishments of the past two years and laid out his vision for the coming period. He highlighted the struggle for fair community college accreditation, the court fight against the deceptive, corporate-driven Vergara lawsuit, and many local struggles.

But Pechthalt reserved the bulk of his speech to analyzing the economic crisis and the need for a comprehensive solution to society’s problems, widening the picture to understand that the only way to allow schools to successfully grapple with the problems that walk in their doors with their students is to fix the problems at their root. He pointed to Proposition 30’s successes, but warned that the progressive tax measure only restores part of the funding lost during the Great Recession, and that California still has a long way to go before reaching the national average in per-pupil spending.

The delegates expressed their approval of the current direction of CFT by reelecting statewide officers Joshua Pechthalt (President) and Jeff Freitas (Secretary Treasurer), along with 23 of the current 24 vice presidents. Freitas was reelected by acclamation; Pechthalt, in a contested election, won 93 percent of the vote.

The constituency council elections featured contests for president in the EC/K-12 Council (Rico Tamayo, of the El Rancho Federation, prevailed over Francisco Rodriguez from the Pajaro Valley Federation, and succeeded Gary Ravani, who stepped down after two terms) and the Classified Council, where incumbent Paula Phillips, Berkeley Council of Classified Employees, turned back the challenge of Velma Butler, Los Angeles College Staff Guild. In the Community College Council, eight part timers vied for four slots, and the winners were incumbents John Govsky, Linda Sneed, Amy Roberts, and Linda Chan.

CFT recognized retired Assemblymember Paul Fong for his years of service on behalf of public education, and former San Francisco Community College Federation of Teachers president Alisa Messer with the “Women in Education Award” for her steel under fire, leading AFT Local 2121 through years of attack by the Accrediting Commission for Community and Junior Colleges.

Former CFT Senior Vice President Laura Rico accepted the CFT’s highest honor, the Ben Rust Award, after a storied career in which she served for many years in the ABC School District as an early childhood educator, local president, CFT senior Vice President, AFT vice president, and AFL-CIO vice president. She led the last K-12 strike in the CFT, in 1993, which after 8 days taught the district that it is better to collaborate with the union than run an authoritarian top down district. She credited her colleagues, the members of the ABC Federation of Teachers, numerous others, and her mother, who gave her the example and courage to stand up for what she believed in. She closed with a Mexican saying, “They buried us, but they didn’t know we were seeds.”

First-time CFT Convention delegate Liza Mardoyan, a school nurse from Newport-Mesa, said, “I was pleasantly surprised; the convention was more invigorating than I expected. I really liked the fact that there was a lot of talk about political activism. It gave me a roadmap of where we are, and where we stand as locals, and where do we go from here. It clarified how our small local efforts are connected to the big picture of affecting change through legislation. I also regret there wasn’t twenty of me to go to all the workshops.”