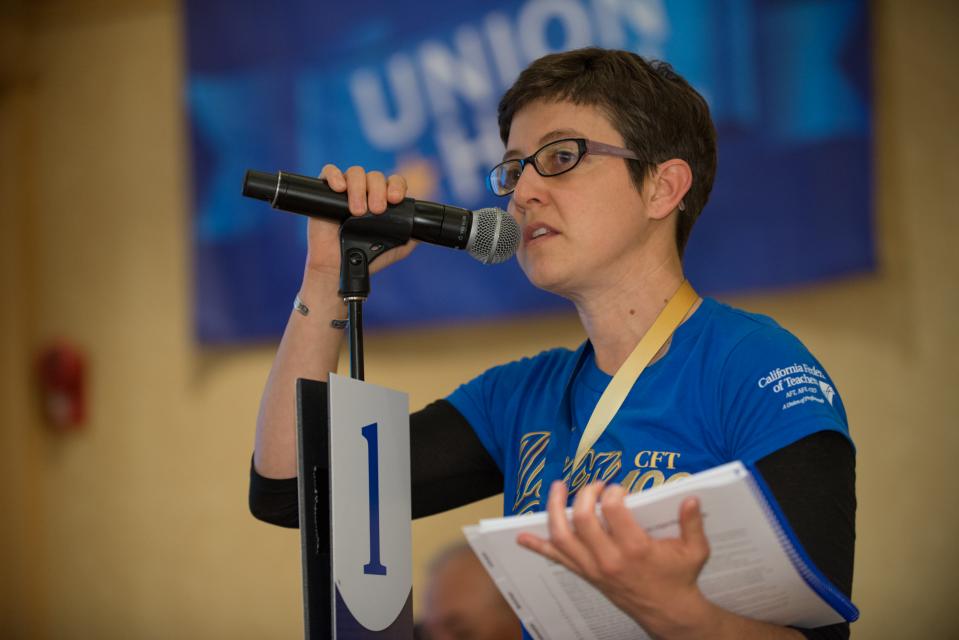 On its 100th Anniversary, the CFT voted to rebrand itself. In accordance with Resolution 1, which convention delegates passed unanimously, it will now be CFT: A Union of Educators and Classified Professionals. The change formally recognizes that the union proudly represents a broad spectrum of education workers.

Luukia Smith, elected Secretary Treasurer of the CFT by delegates, and the first classified employee to serve in this position, was first to rise in support of the change.

“To include it in the name puts classified professionals right out there,” she said.

Patti Seraphin, president of the Palomar College Council of Classified Employees, said the rebranding would reaffirm the value of all the members of the union and Ray Gaer from the ABC Federation of Teachers said it would help to connect all union members together. Barbara Baer of Palomar Faculty Federation agreed.

“With attacks on public unions, it’s more necessary to make sure we speak with one voice,” she said. “The administration is trying to divide us, and working people need to stand together.”

The amended resolution passed with no dissenting votes.

The delegates passed 15 other resolutions, on topics including charter school accountability, limiting standardized tests, the Green New Deal and supporting part-timers and retirees.

John Perez, president of United Teachers Los Angeles-R, rose to talk about Resolution 3 to expand retiree participation in the CFT Council of Retired Members, pointing out that retirees knew the union’s history and would be an asset when running a political campaign.

Doug Orr of AFT Local 2121 also spoke in support, saying locals need to take it seriously when designating someone to go to the council. Several more speakers supported the measure, and it passed without opposition. 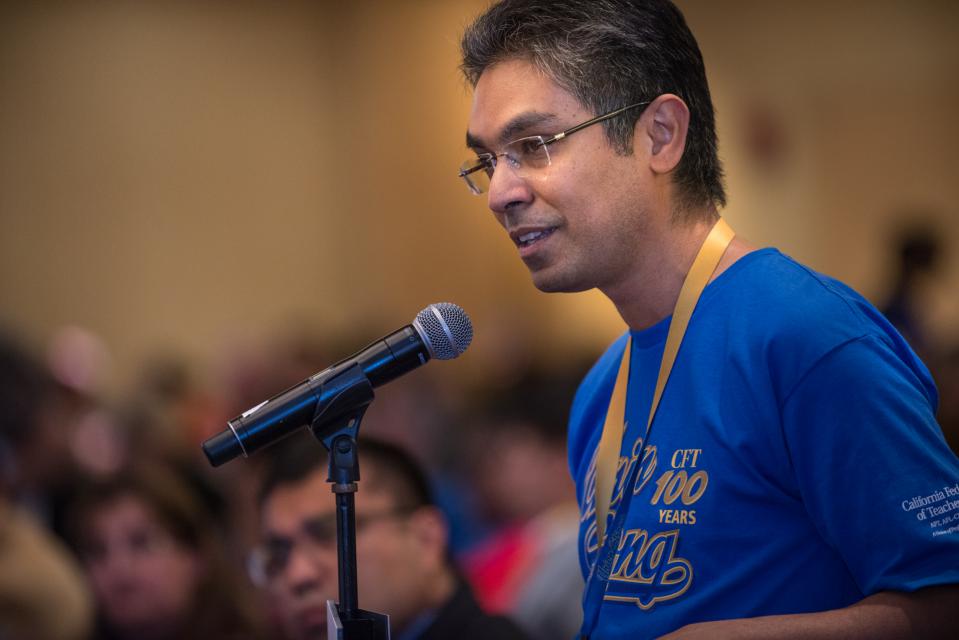 There was lots of discussion about Resolution 8 to oppose portfolio schools and privatization before it passed unanimously. Steve McDougall of the Salinas Valley Federation of Teachers and Ingrid Gunnell of United Teachers Los Angeles spoke about how some school districts around the country have adopted a portfolio model, which treats schools like “stock holdings and trimming the failures by privatizing them or closing them.”

Rico Tamayo, president of the EC/TK-12 Council, called the portfolio model another way for wolves to be in sheep’s clothing, and paraeducator Thomas Harriman of United Educators of San Francisco said he was concerned about charters schools pushing out special education students.

Charter school reform also came up in Resolution 19, as did the Students and Communities First ballot measure that will close a loophole in Proposition 13. This would mean no longer under-taxing commercial property and generating more funding for public education and class size reduction. The resolution passed.

Resolution 4, also about charter schools, called for economic and environmental impact reports before they are approved, and passed unanimously. Gunnell again spoke in support, saying the charter school network KIPP was trying to build a large campus in an old hospital in a neighborhood that already had several elementary schools, and the space could be better used for affordable housing. Mel House, a fellow UTLA member, also spoke in support, saying she’s seen what happens when a charter school “co-locates” on a public school campus.

“They take any room marked as empty,” he said. “That includes computer centers and science labs and parent centers.”

House also spoke in support of a resolution to limit student assessments that aren’t mandated by the state.

“One of the worst parts of my job is having to butt heads with teachers who pull kids out of my class to do reading tests or language tests,” said House, a physical education teacher. “I have to say, ‘No, this is my time.’” 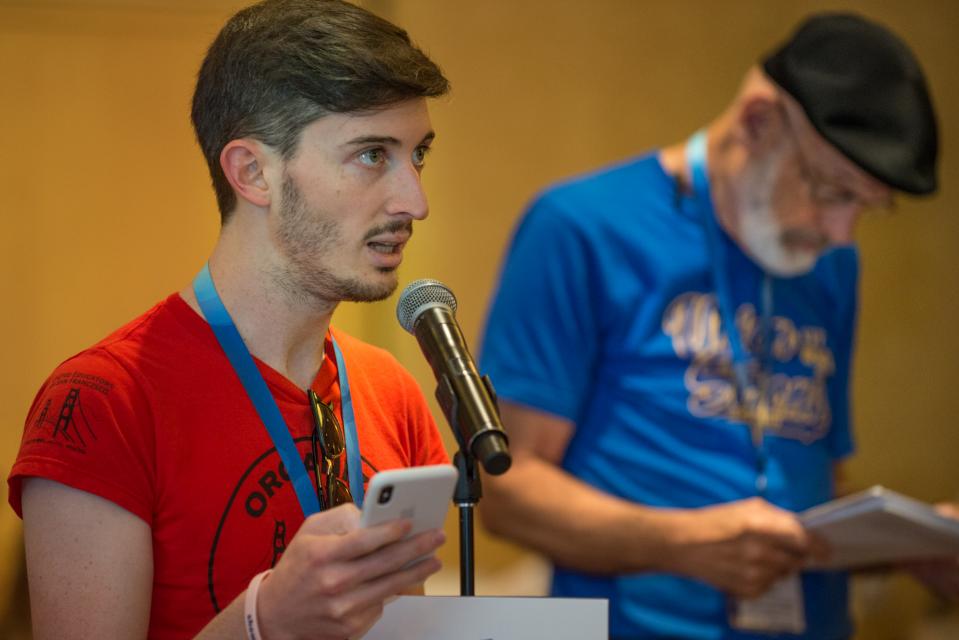 Two resolutions from the Higher Education Issues Committee to support more inclusion of part- time faculty were adopted unanimously – Resolution 9 on participation in shared governance and Resolution 11 to permit inclusion of non-Senate faculty in the UC Academic Senate.

Delegates discussed Resolution 10 from the same committee to support compensation for part-time educators during a lockdown, and the resolution passed after being amended to “all affected employees.”

Gunnell spoke in support, saying the homeless population in Los Angeles had increased dramatically. Also supporting the resolution were VanCedric Williams of United Educators of San Francisco and Suleman Ishaque of AFT College Staff-Los Angeles, who noted that he had recently had a child and was worried about housing. John Livosky, also from UESF, mentioned that San Francisco is planning housing specifically for educators.

The last resolution delegates debated was Resolution 23 in support of the Green New Deal now before Congress. Jim Miller, who serves on the executive board of the AFT Local 1931 and chairs the San Diego-Imperial Counties Labor Council Environmental Caucus, said the resolution was a way of putting the CFT in the vanguard and modeling for the rest of the labor movement.

“This is largely aspirational,” said Miller, who also was behind a resolution several years ago “committing the CFT to a climate justice agenda,” making it the first statewide union to pass such a resolution. “But we’ve got a decade or so left, or everything else is not going to matter a lot.”

After discussing an amendment to add wording about more sustainable transit, which failed, the resolution to support a Green New Deal passed. The rest of the resolutions were referred to the CFT Executive Council.