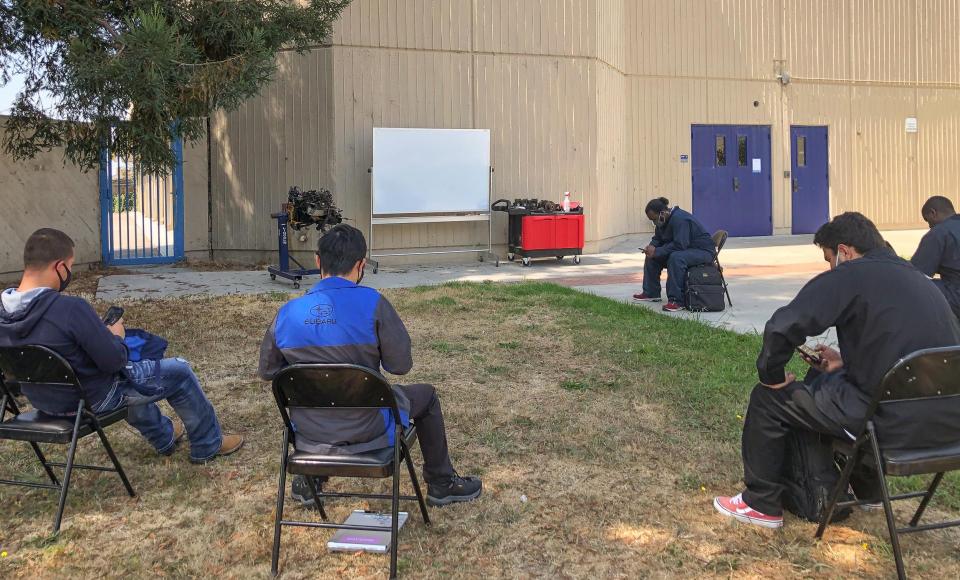 So what are community colleges doing now? At the four campuses in Los Rios in the Sacramento area, about 15% of the classes are back, says Jason Newman, the president of Los Rios College Federation of Teachers. He says that’s what many members he’s heard from want. 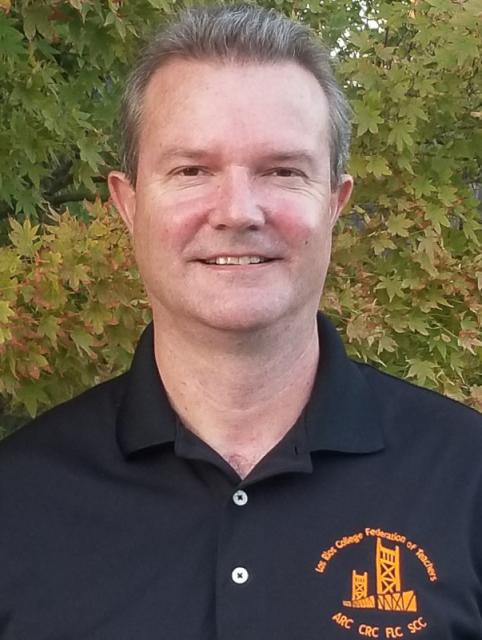 “About 95% of these faculty want to stay online because of the delta variant,” he said.

The district has a mandatory vaccine policy, Newman says, with all faculty and students who are on campus needed to have verification or to file for an exemption by October 1. Many of the classes meeting in person are the ones that would be a real struggle to do online, Newman says.

“Those are primarily athletics and other course that we call ‘impossible to convert’ like welding or automotive technology or career classes,” he said. “Then there’s kind of fuzzy ones we call ‘difficult to convert’ like arts and theater.”

The district is also offering some science classes with labs in person this semester as well as a few English and math classes that are essential for graduation.

Newman says they have signed an agreement for next semester that gives faculty the option to remain 100% online as long as the dean allows it.

Some students on campus have tested positive, Newman said, leading to changes.

“We’ve had to flip some courses on the ground to online and then flip them back,” he said. “We’ve had a lot of faculty anxiety.”

Newman says some of the custodians and police officers, many of whom are on site, don’t want the vaccine. Some faculty members don’t either. He says he’s trying to balance the interests of the members who want the vaccines and those who don’t.

The vaccine mandates are a district policy, he says, and in the local they are discussing things like the vaccine exemption process, faculty interactions with unvaccinated students in the classroom, and safety protocols while trying to also negotiate salaries. Some members want to go back to the classroom next semester, and they are working to make sure they can, barring a new variant.

At Yuba College in rural Northern California Yuba County, which saw a sharp spike of COVID cases in July, Elaine Robinson, president of the Yuba College Federation of Teachers, says they have two or three students testing positive every week. As with Los Rios, a small number of classes — about 10% — are on site athletics as well as the sciences like microbiology, and career classes like welding and culinary. Robinson says the college offered some classes, like economics in person, but students opted for online.

She says they might have a quarter of the classes meeting on campus in the spring. They have just started negotiations for next semester, and Robinson says her focus has been having people do the kind of teaching they want. She’s glad the district has been open to this.

A few librarians and counselors have been back on campus, Robinson says, but in some cases the libraries are closed, and the librarian will find books for people. Counselors do Zoom and phone counseling as well as face to face. She says she’s gotten some complaints.

“One lady quit,” Robinson said about a counselor, “I was assisting her, and we were working on it, but it’s so slow and she was in some high-risk groups, so she just said forget it.”

Robinson, who teaches early childhood education, is president of the union for part-time faculty at the rural college. She says previously the district allowed people to self-declare if they were vaccinated, but now there’s a vaccine mandate as well as one for masks.

There’s true of the Peralta Community Colleges based in Oakland as well, says Jennifer Shanoski, the president of Peralta Federation of Teachers.

“The science supports vaccines, and we should support the science,” Shanoski said. “At first the administration was mimicking the state, where you could have a vaccine or do weekly testing, but we came out stronger. There’s one person in the local who’s been a vocal opponent, but mostly we haven’t gotten any pushback about the vaccination mandate.” 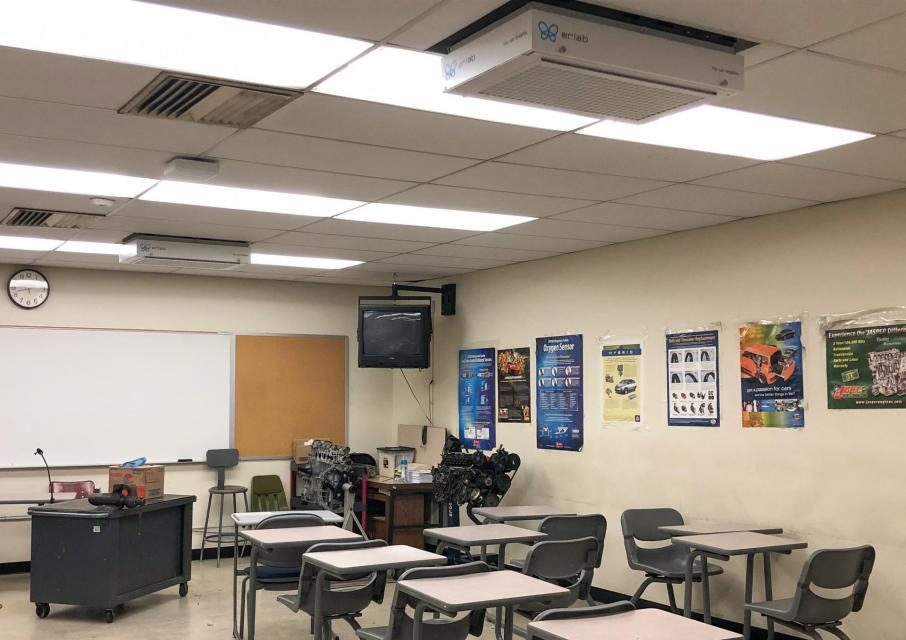 The classes at their campuses in Oakland are still almost entirely remote, Shanoski says, with some career classes like auto shop and science labs meeting on campus. Some members, such as counselors, have been going in voluntarily, she says.

People believe that face-to-face instruction is the most effective, and they look forward to going back to the classroom, but they want to make sure it’s safe. To that end, they’re negotiating for appropriate PPE and to make sure when they go back, there will be flexibility if new variants emerge.

Rob Schneiderman, president of the Coast Federation of Educators in southern Orange County, says they’re negotiating for the same things. Now he says about 20 to 30% of classes are meeting on campus, with the goal of 50% in the spring. Schneiderman says there’s a wide range of thought they’re trying to accommodate.

“I could tell my members they got a 10% raise and I’ll get a handful of emails,” he said. “With this, I got 55 responses in the first week, and all but four were positive. They were profusely supportive. You could feel the relief reading the emails.”

Schneiderman says they have been negotiating about issues like ventilation, having masks available in all classrooms, and a teacher being able to, if they want, to wear a face shield rather than a mask at the front of the room if they can keep six feet of distance.

He says they’re also trying to codify flexibility for the return and negotiated hybrid classes meeting in person, say, once instead of twice a week, so if there’s a spike in cases, and classes need to go back online, it’s less disruptive to transition. Some members appreciate not commuting in the heavy traffic, Schneiderman says, pointing out it’s also better for the environment.

Like Robinson at Yuba College, Schneiderman says they’re trying to work it out so members are where they want to be.

“I see our role as trying to alleviate friction,” he said. “Trying to do that when faculty want to be on campus or if it’s a challenge for them to be on campus.” 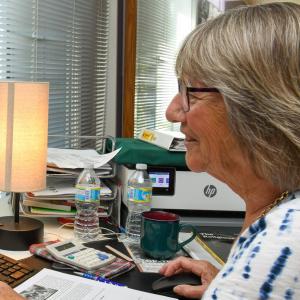 Palomar College child development teacher Barbara Hammons definitely found the idea of distance teaching a challenge. For years, she and her department chair had a running joke – if she ever wanted to get rid of her, no need to fire her, just give her an online class. 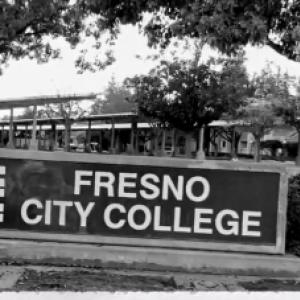 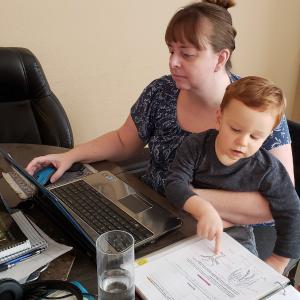