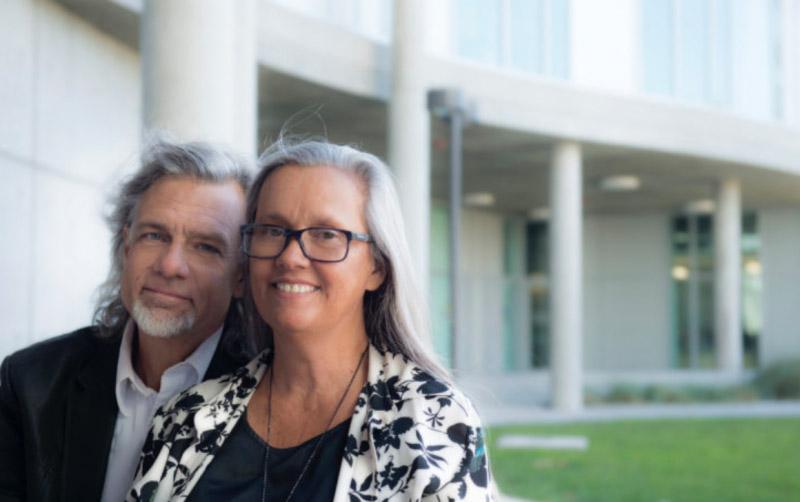 It’s not often that a personal medical ordeal results in a positive outcome that helps many other people, but that’s what happened when Andrew Tonkovich, a lecturer at UC Irvine, had to receive treatment for a brain tumor.

At first the university administration on the campus denied him paid sick leave, citing a Memorandum of Understanding that restricts it to lecturers teaching 100 percent time. But a campaign of union and collective pressure not only reversed the denial in his own case, but now provides a precedent that will affect others.

“I certainly didn’t want a brain tumor, or to be a test case for the MOU,” Tonkovich says. “But I’m proud that what took place around my case is already spreading to people who need the same thing I did.”

Tonkovich became a union activist on the Irvine campus almost two decades ago. “I’m 59, and I’ve been teaching here since I was a graduate student. But although I was active in anti-war and Central America solidarity movements, I didn’t know much about the union at first.” 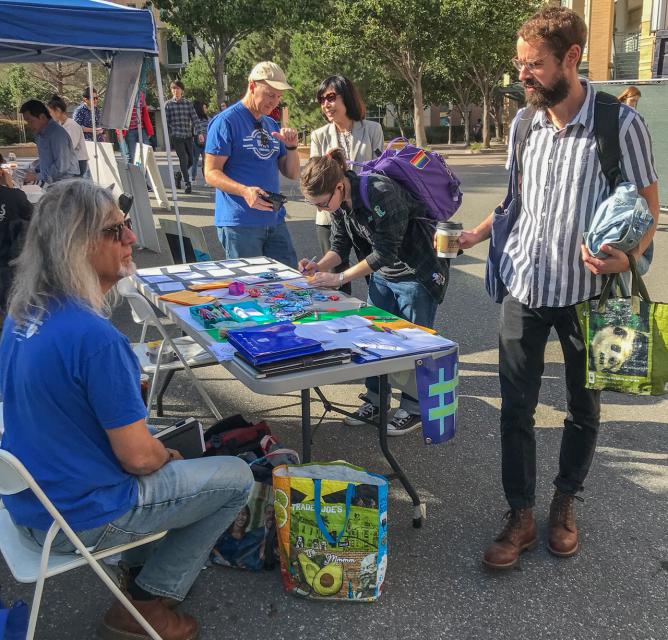 Tonkovich was teaching composition on a campus where the union was moribund at the beginning of the 2000s, when Liz Barba, a recently arrived union rep, took him aside. She pointed out that he was approaching 18 quarters of teaching, which would make him eligible for a continuing appointment. “This was a really important achievement of our contract at the time, but I didn’t know anything about it. Until we won that, the university would just keep churning the lecturers, keeping people only until the time it had to pay them more. So Liz threatened to grieve my case, and I became the first continuing appointment in the composition department. That made me a union activist.”

Tonkovich also pushed to get a 100 percent assignment. “At first the administrators didn’t actually believe that it was possible for someone to do the work required for the assignment, and finally said that they would ‘try it out’ to see if I could,” he remembers. “And it was very hard. I was working weekends, and the workload was tremendous.” Nevertheless, he kept with it until other responsibilities, like editing the Santa Monica Review, forced him to teach six classes instead of the eight required for a 100 percent load. 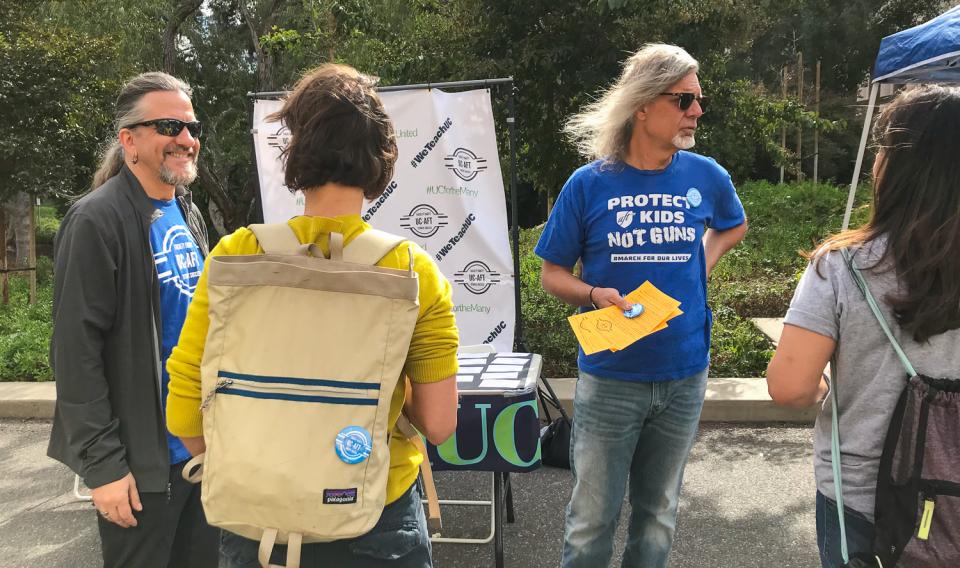 Meanwhile, the Irvine union, Local 2226 of the University Council-AFT, was rebuilt. It mounted a two-day campus shutdown in 2002, and Tonkovich served as union president for 16 years. Today Local 2226 contributes two members to the systemwide bargaining team, has a grievance committee, and is a presence on campus acknowledged by the administration. But that administration is nevertheless, in the eyes of union activists, an intransigent administration that believes its job is “to tell the union ‘No.’”

Tonkovich ran afoul of it when he began having physical difficulties, resulting in a first diagnosis that he had a nerve problem, and then an even more serious one that he had a benign tumor deep within his brain. As surgeries started to alleviate the condition, and allowed him to begin physical therapy, he applied for paid sick leave.

“I thought that with 22 years teaching at the campus, and knowing that UC had waived the 100 percent requirement for others, that I’d get it,” Tonkovich recalls. “Not only was I denied, but administrators sent me a letter telling me to repay two months of my salary.” Because his salary is disbursed over 12 months, and he was not going to work the months he was incapacitated, the university was insisting that he turn back his pay for that time. The university even wanted him to repay his healthcare premiums, despite the fact that he was using his wife’s coverage instead.

Tonkovich wasn’t in much shape to fight the case, however, as he was undergoing surgery and diagnostic procedures. Getting denied was an additional blow because he knew that state disability payments, which the university suggested he apply for, would give him less than $400 every two weeks.

“While I was asleep on the operating table, four people I’ve worked with for years decided, ‘Andrew’s busy, and we’re not going to take this.’ And they organized.” On the Irvine campus two union activists and the union rep did “old-school organizing” — printing out leaflets and posting them all over. They contacted a reporter for Inside Higher Education, who interviewed Tonkovich and documented his case.

During one systemwide bargaining session a sidebar conversation made other administrators aware of the case, and the callous image the university was getting as a consequence. They were mortified, and union activists were urged to rewrite and resubmit Tonkovich’s request. They did so. And it was denied again.

At that point UC-AFT President Mia McIver started an online petition demanding the university provide Tonkovich paid sick leave, which eventually collected over 7,000 signatures. After further protests and organized pressure, a third request was submitted, and he finally got the email message saying he’d be paid during his treatment period. And since then, one more lecturer with a part-time appointment, on another campus, has received paid leave as well.

McIver believes that the struggle was successful because “we worked hard to both personalize the problem and connect it to bigger campaigns, like our wage theft petition and our bargaining campaign. The victory for Andrew,” she says, “immediately had wider effects and teaching faculty on other campuses in similar situations were able to secure paid medical leave. Much of the credit for the momentum goes to Andrew himself, who spent decades building relationships as a teacher and organizer. This shows that, when we put those relationships at the core of our union work, they can transform into positive changes.”

Tonkovich notes that union has challenged the MOU’s restriction on sick leave before. “But my experience has made the urgency of this issue more apparent,” he believes. “The union has to use this opportunity, and this is something worth fighting for. It makes a difference in people’s lives.”

In bargaining, UC-AFT has already presented its proposal on leaves of absence to UC administration; it includes paid medical leave for all teaching faculty, regardless of appointment percentage. A January session of the systemwide negotiations for the lecturers’ contract will take place on the UC Irvine campus. “Guess who’s going to be at the table,” Tonkovich laughs. 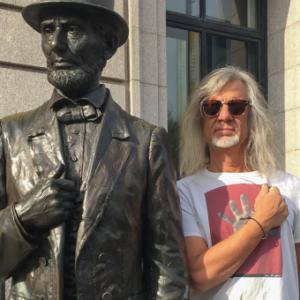 Telling, Not Being the Joke A personal essay by Andrew Tonkovich

Q: Tell me, how long have you been working here?

A: Ever since they threatened to fire me.

That old cornball joke still makes me laugh, 50 years after I read it in a kids magazine. I understood it then as honest if everyday acknowledgement by the presumably once-lazy worker of his or her required acquiescence to power, and of isolation. But its splendid trick syntax and on-the-nose calling out of the coercive relationship of management to labor suggested more, even to a 10-year-old: cognizance of at least the potential inherent power of the worker — all workers? — to apprehend, to subvert, to jest, however fatalistically, cynically or — my own favorite — insubordinately. 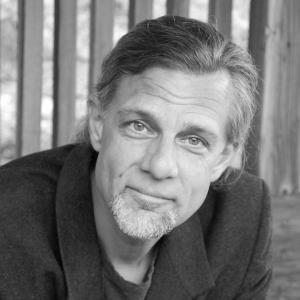