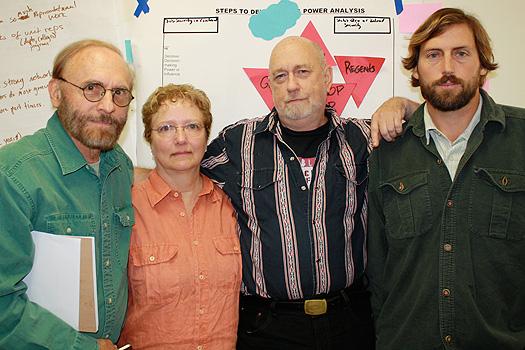 Goetz Wolff has taught at UCLA for more than 20 years, but was generally more involved with Southern California’s vibrant labor movement than with the union on his job. Wolff, for example, earned high praise for his six years as research director at the Los Angeles County Federation of Labor, but barely knew the ins and outs of the University Council-AFT.

For the past year, though, the urban planning lecturer has been drawing on his broad union experience to plan and implement a strategy to fully enfranchise UC-AFT’s 3,000 lecturers and 300 librarians.

Wolff said the idea for a campaign germinated last September at the UC Berkeley Labor Center, during a week-long training for UC-AFT members and field representatives from four of the system’s 10 campuses.

“We envisioned ‘You See (UC) Democracy’ directly reaching out to members and potential members,” he said, “especially to the many non-Senate faculty members being denied the most basic rights of Senate faculty.”

“Statewide power comes from local strength,” Wolff said. “We need to activate our members to continue winning good contracts, but we must be strong all year, not just when we’re negotiating.”

After decades of UC-AFT representation, the pay and benefits of contingent faculty compare favorably to other universities, though negotiations weren’t always smooth. Job actions rocked six UC campuses in 2003. The librarian unit recently ratified a five-year contract and lecturers are preparing to negotiate an agreement to replace one that expires in June 2015.

“Statewide power comes from local strength. We need to activate our members to continue winning good contracts, but we must be strong all year, not just when we’re negotiating.”

At UCLA, for example, the local is mobilizing against the Dean of Social Sciences for capping a Cesar Chavez School of Chicano Studies lecturer before his sixth-year review to prevent him from holding the appointment. This is known as “churning” or “post-six avoidance,” a practice UC-AFT has fought and has addressed by negotiating statewide language giving lecturers reappointment rights.

UC-AFT’s roots go back to 1971, when activists formed locals at seven campuses. UC employees won the right to bargain collectively in 1978 after Gov. Jerry Brown signed legislation into law. Librarians affiliated in 1983, followed the next year by the lecturers, who ratified their first statewide contract in 1986.

“We are the largest group of employees who are carrying out UC’s core mission — educating students,” Wolff said. “But of all UC employees, lecturers are the hardest to organize. Some only work on campus one day a week, and others don’t work every term.”

Wolff has taught for more than 20 years in UCLA’s graduate Urban Planning program. He was asked to develop his own courses, such as “Labor and Economic Development” and “The Southern California Regional Economy,” that have entered the course catalog.

“I choose to teach half time,” Wolff said, “so I can integrate my consulting work with unions, public agencies and community organizations with my classes, and so I can mentor students. The result is that my students begin to link their classroom work with practice in the field, and that often leads to activist jobs.”