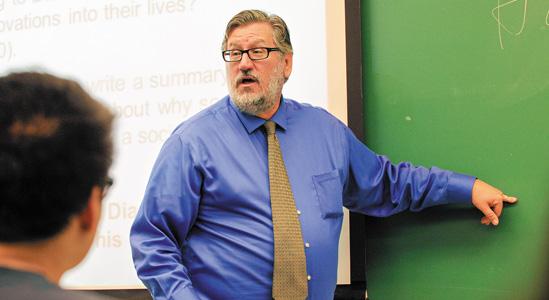 His voice may be a little hoarse and his cold is still hanging on, but Ben Harder is there for the start of bargaining. Harder leads the negotiating team of UC-AFT lecturers. Their contract expires June 30, and the talks started March 3.

Harder, who teaches English composition at UC Riverside, has been involved in negotiations for eight years, and was chief negotiator before. “I like the negotiating process and the way we can (hopefully) come to a reasoned agreement. But most important, we have a real impact on people’s lives.”

Once Harder started as a lecturer, he was a freeway flyer for six years, teaching courses at UCR, Mt. San Jacinto Community College, and the University of Redlands. “In 1999 there was no such thing as a continuing contract for lecturers at UC. We had to reapply for our jobs every three years,” he remembers. “Now we have continuing contracts. Then we were getting a salary starting at $33,000 a year. Now we start at $49,000. It’s still not enough though. Many of us are paying the student loans we took out to get our PhDs.”

While salaries are always a part of bargaining, he outlined three important priorities for the bargaining this year — more stable employment, better benefits, and shared governance. “We have an excessive six-year probation period dominated by term contracts,” he explains, “where everyone has to reapply every year. That’s at least two or more years longer than probation periods for teachers in K-12 or community colleges.” For those six years, there is no stability in the lives of lecturers.

I like the negotiating process and the way we can (hopefully) come to a reasoned agreement. But most important, we have a real impact on people’s lives.

To make matters worse, lecturers who have a position teaching less than 50 percent don’t qualify for Social Security, and the university makes no pension contribution for them. Of the 2,947 lecturers in the UC system, 1,779 teach more than 50 percent, and of them, 270 have one-term appointments, disqualifying them from benefits. Some 1,168 teach less than 50 percent.

“Between one-third and one-half of lecturers at any given time are not in the Social Security system and do not receive any health insurance,” Harder charges. “In our view, every lecturer should qualify for Social Security.”

As non-tenured faculty, lecturers feel excluded from the university’s system of shared governance. They would volunteer to serve on tenure faculty committees, although they would likely be refused. “But why,” he asks, “aren’t we on committees developing curriculum? In the first two years of a student’s education, lecturers play a key role. There’s not one freshman English class in the whole UC system taught by a tenured faculty member. Lecturers and teaching assistants teach all the ESL and first-year writing classes, and all first-year math courses.”

Making such a large number of vital instructors so extremely insecure has an enormous impact. “Lots of lecturers leave their discipline,” Harder recounts. “Many turn their back on the education system entirely, looking for different union jobs or employment in business. There’s a constant cycle of people coming in and out, which can rob the university of its institutional memory.”

The union isn’t bargaining to change the structure, but believes that working conditions can be substantially improved by negotiating better compensation, recall rights and other protections. The university is pushing in the other direction, for instance shortening the current year’s notice for lecturers it intends to permanently lay off.

“Our working conditions constitute a huge part of our lives,” Harder says. And that’s what makes the negotiation of this contract so critically important.