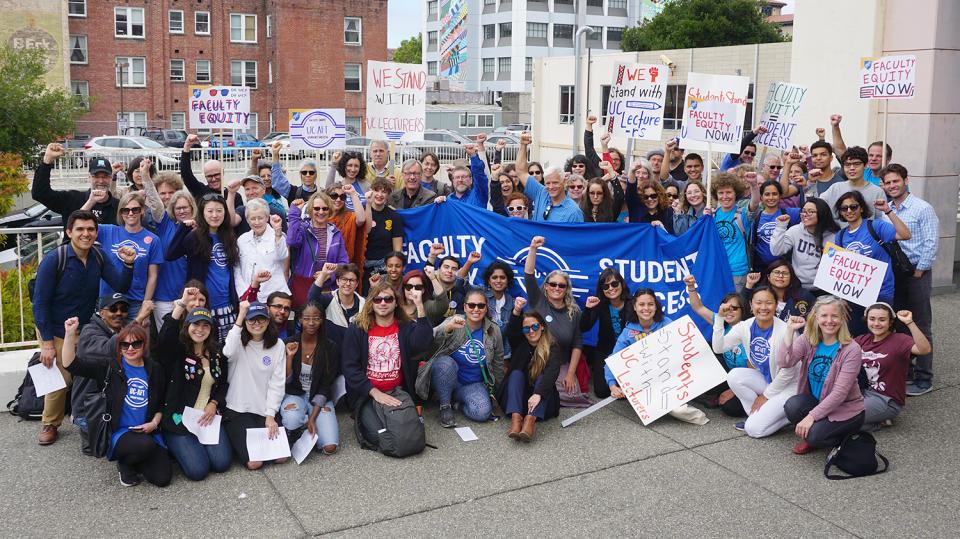 Eighty UC-AFT members and their allies showed up at the first bargaining session at UC Davis as lecturers began their contract negotiations last spring. The impressive number of rank-and-file members in the room to support the team helped them win open bargaining, says UC-AFT President Mia McIver.

“It set a precedent,” she said. “It was difficult for management to look 80 people in the eye and say, ‘Sorry, you can’t come back.’”

Having so much support has built momentum and activism, McIver said.

Katie Rodger, the president of AFT Local 2023 at UC Davis, deserves a lot of credit for this enthusiasm, McIver says.

Rodger, a lecturer in the writing department, says she wants to fight anti-union sentiment and engage members to push for more rights, rather than accepting management’s demands for rollbacks.

“What we’ve seen so far is that they’re proposing takeaways to make the role of lecturers in UC system far more contingent, and if we follow on the path UC is laying out, we’ll have less job security and far less chance of building a career,” she said. “We’re proposing improvements in the path to continuing lecturer and more full-time positions.”

Rodger is full-time herself and she knows what a difference that job security can make along with better working conditions.

“I’m talking to you in my own office with a door and a window,” she said. “I have colleagues in cubicles, in windowless rooms in a library, or even at desks in a copy room. A big part of our campaign is that our working conditions are students’ learning conditions.”

John Rundin, a lecturer in classics at UC Davis and the vice president of Local 2023 as well as vice president of legislation for UC-AFT statewide, says he’s been heartened to see members getting fired up about their contract. The organizing to get such big turnout is particularly impressive given the difficulty of reaching non-tenure track faculty members, he says.

“Many of them have very isolated jobs where they come in for a few hours a week and then are gone,” he said. “Face to face is the best way to do organizing, and the union leadership is meeting those challenges.”

“The university wants to treat us as a disposable workforce, and cycle people in and out,” he said. “They maintain this fiction that there’s fluctuation and they should be able to fire people at will, so many people do not know from quarter to quarter if they have a job, and that’s no way to live a life.”

“She has managed to assemble around her a group of people who are loyal and effective,” he said. “She has created an environment where activism thrives on campus. She’s down to earth but idealistic.”

Daniel Schoorl, a librarian at UCLA and the vice president of organizing for UC-AFT says Rodger has great energy. He thinks her efforts to increase the visibility of the campaign and recruit new members is exactly the right focus. Along with job security, pay is a big issue, he adds.

“Tenured full-time faculty got a 5.3 percent increase, and the lecturers and librarians got a 3 percent increase,” he said. “The language in our contract says any increase given to senate faculty should be given to lecturers, so we filed a grievance. They’re claiming it’s not grievable, so it may proceed to arbitration.”

A lot of the lecturers work very few hours, and the median salary is $19,000 McIver says, adding that increasing compensation and getting more full-time jobs will be a big part of their bargaining demands.

Another issue is workload, with many lecturers doing unpaid service work. McIver says they will fight to include service work and professional development in the contract.

To be working for solidarity and collective action feels particularly important to Rodger now.

“I always tell people our union is our connection to the university and our connection to our contract and who we are,” she said. “Being part of UC-AFT, and thinking and acting locally in a world where we feel so powerless and oppressed – I see that resonating with a lot of people. It’s like ‘I can fight this fight and it may affect me in real time.’”

Sign the petition! Support UC lecturers in their bargaining campaign.