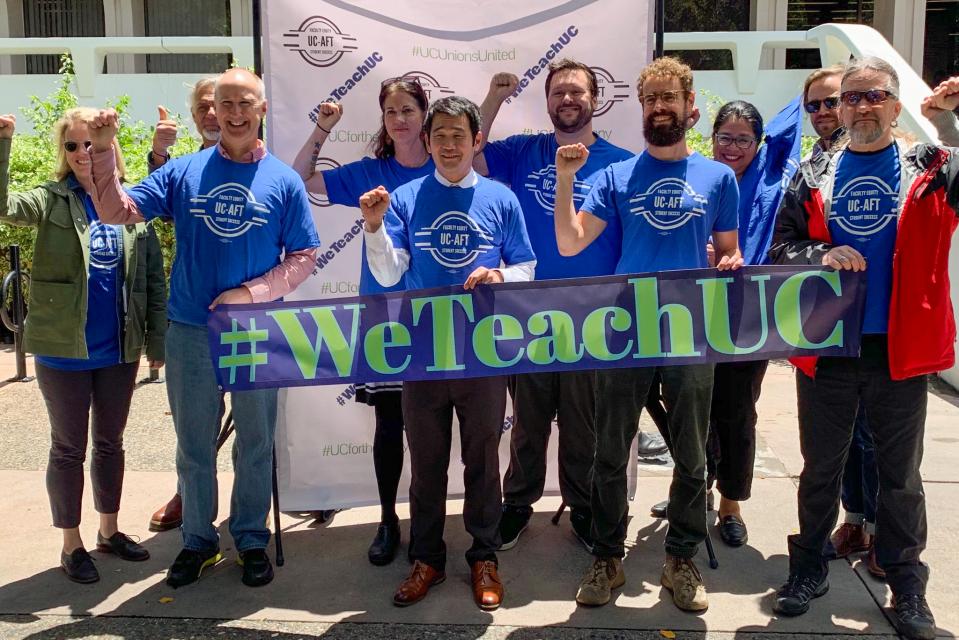 Among the striking workers were the equivalent of classified employees at the UC: the custodians who clean students’ dorms and faculty members’ offices, the cooks and servers who staff the dining halls, and the gardeners and groundskeepers who keep our campuses looking beautiful. They were joined by the medical specialists who care for patients in UC hospital rooms, emergency rooms, operating rooms, and labs, and the 13,000 healthcare, research, and technical workers of UPTE-CWA. Everyone on the picket line sacrificed a day’s pay in order to ensure long-term stability and equity at the UC.

At issue is the outsourcing of good, middle class jobs at the UC to private contractors who can escape responsibility for providing a living wage and health insurance to their gig workers. Contract labor isn’t just a threat to the UC’s IT workers and drivers; it’s also decimating UC faculty and degrading students’ education.

The UC is more than an engine of education and research. As our state’s largest employer, the UC drives California’s economy. It has the power to strengthen middle class families and close the widening gap between California’s rich and poor. But instead of investing in its employees as a way of investing in California’s future, the UC is outsourcing jobs, privatizing our greatest public institution, and inflating the ranks of the working poor.

We’re not accustomed to thinking of faculty as vulnerable to this maltreatment. The word “faculty” might conjure up the stereotype of a tenured professor who works nine months of the year and has a cushy job for life. Not only is this caricature unjust to UC’s hard-working tenured faculty, it utterly fails to capture the reality of life for UC’s 5,500 precarious and contingent faculty, most of whom are lecturers unionized with University Council-AFT.

Dedicated specifically to educating UC students, UC-AFT lecturers are master teachers who specialize in undergraduate instruction. They teach about one-third of all credit hours and typically hold doctorates and other terminal degrees. Many conduct unpaid, voluntary research and service that the UC refuses to support or compensate. The median salary for a UC lecturer is $19,900, meaning that many lecturers take second (or even third) jobs to make ends meet. The financial pressure necessarily results in dramatically less availability for the students who should be top priority.

UC administrators outsource education by employing teaching faculty on part-time, short-term contracts, even though undergraduate enrollments have grown 29 percent in the last decade and show no sign of slowing down. As temporary workers who are hired term by term, many lecturers have no career prospects. This time of year, as spring quarters and semesters are drawing to a close, many are learning that they are not being rehired for the fall, despite extraordinary scholarly achievement and demonstrated professional excellence. This is devastating not just for faculty but for the students who are losing their closest mentors.

The UC’s exploitation of gig labor forces an astonishing rate of teaching faculty turnover – about 30 percent on every campus every year. A lecturer who welcomes a first-year student to campus with excitement, optimism, and joy will in all likelihood have been pushed out of the university by the time that student graduates.

Outsourcing teaching to the gig economy signals that UC administrators no longer regard education as central to the university’s mission. When UC faculty are treated as disposable, students get the message that their education doesn’t matter. California is shortchanging its future leaders.

The recent strikes result from UC’s repeated violations of labor law. AFSCME 3299 has filed unfair labor practice charges because university administrators refuse to fulfill their legal duty to negotiate over outsourcing and privatization. Last week, UC-AFT also filed unfair labor practice charges over the same administration’s refusal to be transparent about hiring, workload, and union dues deductions. Together, these charges point to the UC’s systematic failure to act fairly and lawfully.

In the face of UC’s outsourcing agenda, AFSCME and UPTE members are demonstrating great courage in holding a public institution accountable. UC service workers deserve special recognition during Classified School Employee Appreciation Week. To make good on the promise of upward mobility, economic advancement, and access to opportunity, the University of California must prioritize equity for students and workers together.

We live in the most prosperous state in the union; California is currently sitting on a $21.4 billion budget surplus. There’s no excuse for the UC, with an annual core operating budget of $8.3 billion, to outsource jobs or pay poverty wages when so much is riding on the work of its employees.

Mia McIver is president of the University Council-AFT and teaches writing as a lecturer at UCLA.