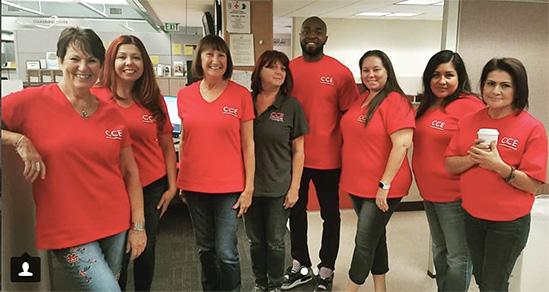 No one was surprised when the Janus decision from the U.S. Supreme Court came down over the summer. In the months since then, however, locals across California have defied predictions of a mass exodus of dues-paying members. In fact, after two years of recruiting new employees and convincing agency fee payers to join, union ranks are growing.

President Connie Marten of the Coast Federation of Classified Employees said three AFT Local 4794 members opted out of the union when Janus took effect in late June. But, Marten added, that was more than offset by a district-wide “recommitment campaign” in June and July.

The final result, she said, was membership increased from 84.5 to 87 percent.

President Anel Gonzalez said three of the 356 members of the Palomar College Council of Classified Employees also opted out. Gonzalez, however, is upbeat.

“Our membership increased from 82 to 87 percent,” she said.

That’s quite a climb from six years ago, when fewer than 60 percent of the unit belonged to AFT Local 4522. Political activists harnessed the union’s new political strength during the recent election when union-endorsed candidates won two of three seats on the Palomar Board of Trustees.

The local holds happy hours to build personal ties among members, and now posts on-the-job pictures of staff on its Instagram page. “We’re rebranding so everyone knows our role in student success,” Gonzalez said.

The threat posed by the Supreme Court’s Janus decision is very real, however. Several billionaire-backed groups have begun soliciting teachers and classified employees on social media and through email. In mid-November, the Freedom Foundation announced “Operation Worker Freedom,” a six-week campaign to reach public sector workers in 10 California cities before the holidays.

Two weeks later, a federal court in the Western District of Washington State handed the foundation a major setback. Judge Robert Bryan, a Reagan appointee, dismissed its claim that non-members should be repaid agency fees deducted before Janus. The union acted in good faith, Bryan wrote. The union’s actions were authorized by law and the state of Washington, he concluded.