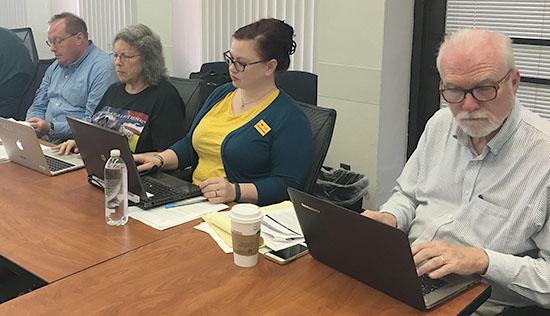 In April 2016, Julia Troche applied to be a lecturer in Egyptology at UCLA. “It was my alma mater as an undergrad, so this was a special position for me, a chance to give back to the institution that gave me so much,” she says. She’d received an email from the department chair of Near Eastern Language and Culture asking her to apply. “She told me there was no guarantee of continuing employment, but it would put me in a good place while I looked for a tenure-track appointment.”

An issue arose when the university told her that she had to sign the hiring paperwork in person. After the end of her previous teaching job, she’d joined her husband in Rhode Island. If she waited until UCLA’s semester started, she would have had no healthcare coverage for several months. In addition, she had to have an in-state address to qualify.

“I asked if there were any money for relocation, and was told there wasn’t,” she remembers. “So I flew to Los Angeles at my own expense and signed the paperwork.” She was able to find an apartment in just one day, but then had to pay rent while living in Rhode Island.

“It would have been good to speak to a union rep early in this process,” she believes, “and instead I only met someone after I’d been on campus. At that point the rep wanted me to sign up as a member, which I was happy to do, but it was too late to help me when I needed it.” She adds that she didn’t really understand what a union could do, and worried that there might be a stigma attached to asking it for help.

Troche’s experience concerns the University Council-AFT, the union for non-tenure track faculty and librarians in the UC system. Unfortunately, it is not uncommon.

UC-AFT does not currently receive notice from university management about newly hired employees until they have been on campus for several weeks — and then the data is often inaccurate.

Being able to contact newly hired employees is important because with the Janus v. AFSCME case, the new conservative majority in the U.S. Supreme Court is likely to strike down agency fees, which would invalidate the provision in the union’s contract requiring non-members to pay a fee for representation services.

“The structure of the orientation, however, is crucial to us,” explains Mia McIver, UC-AFT’s chief negotiator. “Unlike other employees hired throughout the year, lecturers are hired in waves, at the beginning of each quarter.” The new law requires the university to negotiate the “structure, time and manner” of that access, and gave the administration and union 60 days to do it.

“We were ready in July,” McIver says, “but it took the university until September 26 to meet to exchange proposals. We weren’t surprised by what they gave us. It was virtually the same as they’d given to all the other unions on campus. This doesn’t take the special needs of our members seriously. Troche’s situation is a case in point.”

The union is asking for in-person (not just online) orientations within two weeks of the start of every term, given by HR personnel trained in the requirements of union-university agreements, with time for questions and answers. “We also want an hour for a union presentation, without the chilling presence of university administrators,” McIver adds. “The university is offering 20 minutes, with all the UC unions presenting together in some great cacophony.”

The union for many years has had difficulty trying to contact new hires in person — a key element in efforts to sign up new members in a post-fair share era. “We’re spread over a wide geographic area,” explains John Rundin, who teaches classics at UC Davis. “It’s hard to find people who might just teach one class, and who come to work with no idea that a union even exists on campus.”

In the past, the university management has been notorious for providing lists Rundin calls “old, bad and inaccurate.” Now AB 119 calls for more accurate and timely contact information.

“Under the law, we’re required to represent all members of the bargaining unit,” Rundin says. “This is actually an opportunity to build a stronger union.”