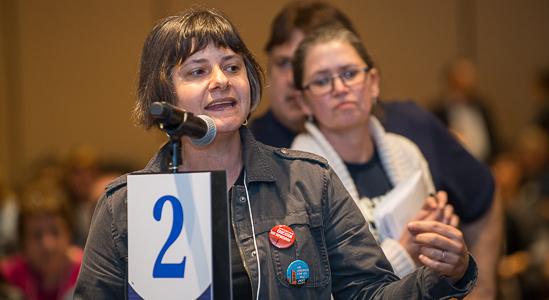 About 400 delegates discussed resolutions on a broad range of policy issues; heard from the law school dean at UC Berkeley, Lt. Gov. Gavin Newsom, and Tony Thurmond, the CFT-endorsed candidate for superintendent of public instruction; joined thousands to rally and march for safer schools and common sense gun control; learned a whole lot about Janus v. AFSCME, a Supreme Court case that could effectively turn the public sector into a “right to work” zone; and heard from a teacher in West Virginia where they succeeded in getting a 5 percent raise for all public employees.

Delegates passed constitutional amendments and resolutions on policy, including resolutions to support a lower adult-to-child ratio in transitional kindergartens, stopping random student searches and supporting organizing noon duty staff in local unions. Some of the resolutions that generated the most debate were ones on McTeacher Nights, pesticide use, and raising the part-time workload at community colleges.

For that last one, Resolution 15, “Raise community college part-time faculty workload to 80 percent,” Phyllis Eckler from the Los Angeles College Faculty Guild rose to speak in support, saying that adjuncts were being forced to be part of the gig economy, coming and going with no security.

Ian Duckles, a former adjunct professor in the San Diego and Grossmont-Cuyamaca Community College districts, then rose to speak in opposition. “It’s going to incentivize hiring a lot more part-timers and fewer full-timers,” he said. “What we should be doing is making it harder for colleges to rely on adjunct faculty. It’s damaging to the institution of tenure and to academic freedom.”

Part-time teacher with the Cabrillo College Federation of Teachers and CFT Vice President John Govsky said he strongly supported the resolution and that arcane laws limited part-timers to 67 percent.

“It means we’re forced to freeway fly and our carbon footprint goes up,” he said. “This is so we can cobble together a living without having to drive all over the frigging state, and so we can be more accessible to our students and be more easily organized.”

Malaika Finklestein, a part-timer at City College of San Francisco, AFT Local 2121, says she sees those freeways fliers struggling to pay the bills, and recently, she talked with a part-timer who had lost her apartment.

“It’s a real problem, but this is not the way to address it,” Finklestein said. “Instead of hiring someone with benefits and tenure and full pay, they hire me for cheaper. We have to do the hard work to get decent pay for everyone we work with.”

Kathy Holland of the Los Angeles Faculty Guild spoke in support of the resolution, saying she had a hard time meeting with students after class because she had to get in her car and drive to another campus to teach.

This is an issue for agricultural communities as well as anybody who eats food grown in California, said Kathleen Kilpatrick from the Pajaro Valley Federation of Teachers. She added that the CFT’s advocacy was important here, and that previously it had helped get rid of methyl bromide.

Another teacher from the same local, Sara Rigler, said that where she works in Watsonville there is nothing between people and the toxic chemicals sprayed on fields but a chain link fence, and students and teachers have gotten sick from the exposure.

Gina Clayton-Tarvin from the ABC Federation of Teachers supported the resolution – and would like members to do more to protect children from chemicals.

“Many school districts are poisoning children with Roundup,” she said. “Go to school board meetings and tell them to stop. You can write a resolution yourself.”

Keith Ford from the State Center Federation of Teachers asked for an amendment to the resolution to renew the ban on atrazine. The amendment passed and so did the resolution with no one speaking against it.

In another debate, Mel House with United Teachers Los Angeles said when educators volunteer at McDonald’s as a fundraiser, it means workers lose their shifts.

“It’s a dangerous practice and anti-labor,” he said. “We need to stop making administrators pimp us out.”

Hector Ruiz from the ABC Federation of Teachers said the principal of the school where he works exhorted teachers to volunteer at a McTeacher’s Night, saying if they didn’t, they wouldn’t get a disc drive for their MacBooks.

These CFT members were supporting Resolution 4, “Oppose and reject McTeacher’s Nights.” The resolution’s authors from the Civil, Human, and Women’s Committee said these events are promoted as fundraisers, but are a “thinly veiled marketing tactic.” They asked for CFT President Joshua Pechthalt to write a letter to state and national PTAs, asking them to stop partnering with McDonald’s for these events and for the CFT to encourage state and local affiliates to re-evaluate them and to support initiatives to curb junk food marketing to children.

Doug Orr, chair of CFT’s Retirement Policy Committee, and a retired teacher with City College of San Francisco, said he strongly supported the CFT sponsoring legislation for this.

“Charter schools not participating in CalSTRS is the biggest impact on undercutting funding of CalSTRS pension system,” he said “If we continue to allow them not to participate, it makes it even worse.”

Salinas Valley Federation of Teachers President Steve McDougall agreed. “There’s an upward trend in new charters opting out, and it affects our future,” he said. “We need to draw a line.”

Convention delegates also passed constitutional amendments, including one on per capitas and staff funding, meaning that the per capitas for active members and non-member fee payers of the CFT will go up slightly.

After much debate, delegates passed amendments to change the CFT Convention to a biennial rather than annual event. Next year, the Convention marking the CFT’s 100th Anniversary will be in Los Angeles. Following that Convention, the next one will be held in 2021.