Council of Retired Members taps a resource: Retirees are “stickin’ to the union” 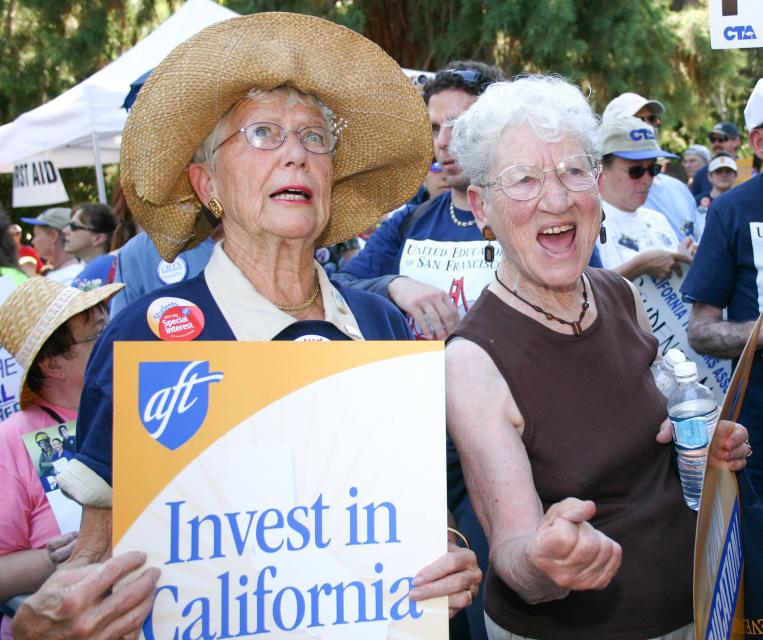 What retirees have that unions need — knowledge, experience and memories — are concentrated in the Council of Retired Members, the newest division of CFT. Convention delegates in 2014 overwhelmingly voted to add the council to the union’s governance structure so retirees could contribute in the same way as working teachers and classified employees.

When the council elected its first officers in 2015, John Perez, who leads one of the state’s largest groups of retired educators, United Teachers Los Angeles-R, became president.

Retirees had been asking for a separate council to represent the post-career viewpoint in CFT governance. They had served on CFT committees, including the Retirement Policy Committee, and provided valuable input to the organization. So when AFT provided financial support to organize new retiree chapters in 2013, the CFT expanded its outreach.

AFT collects a small amount from dues to support retiree activities, and when working members retire they become AFT/CFT retired members. The Council of Retired Members is built on retiree chapters that work in conjunction with their parent locals. There are about a dozen in California (look for the “R” at the end of a local name).

Local 2121-R at City College of San Francisco holds a pre-retirement conference for its active colleagues so they know what to expect as they approach retirement. ABC Federation of Teachers-R funds a scholarship for high school seniors graduating from the district. United Teachers Los Angeles-R enlists its members to make monthly contributions to UTLA’s political action fund. Almost all retiree chapters provide volunteers for their parent locals during political campaigns, and retirees may volunteer with AFT for out-of-state service.

Chapter events provide a way for retired members to stay in contact with their union brothers and sisters. Chapters and retirees serve as historians to their parent locals and some chapters publish newsletters that have been honored in the CFT Communication Awards.

Retiree chapters are made up of people who helped build their unions in a “pre-fair share” environment, and often pre-collective bargaining. If you want to know what that world looks like, just ask a retiree — they helped the union thrive in that environment. Now more than ever, retirees want to offer their experience to help our unions survive.

The Council of Retired Members also keeps a watchful eye over CalSTRS and CalPERS, maintains a steady presence in the California Alliance of Retired Americans, monitors changes and potential threats to Medicare and Social Security, and promotes single-payer healthcare, “Medicare for All.”