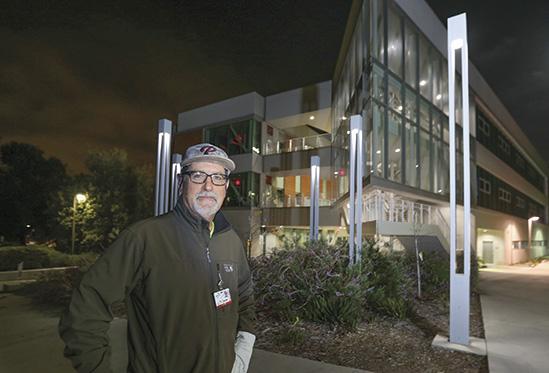 And fewer by the day. Beach and maintenance and operations staff members of the Palomar Council of Classified Employees, AFT Local 4522, recently led the installation of LED lighting across Palomar’s San Marcos and Escondido campuses.

The $1.4-million exterior lighting retrofit caught the attention of the Board of Governors of California Community Colleges, which recently recognized it as the best project by a medium-sized district. Winners are determined by a point system reflecting energy savings, cost savings, and jobs created by the projects. The Board of Governors has presented its Energy and Sustainability Awards since voters approved Proposition 39 in 2012.

Prop 39 – better known as the Clean Energy Jobs Act – generates up to $380 million dollars a year made available to schools and community colleges for projects that “improve energy efficiency and expand clean energy generation in schools.” It was intended to help generate clean-energy jobs, retrofit existing equipment, and construct new energy efficient projects such as heating and cooling upgrades.

“This is a time to think big, to rethink whole lighting systems, not just change bulbs.”

Palomar’s Jeff Bennett said retrofits and upgrades require a hefty investment, but save energy and cut operating costs. Most LED bulbs are rated for a 20-year life, and rarely need to be replaced. Bennett, who supervises building services on the San Marcos campus, is currently auditing energy use for additional projects.

The Federation represents classified employees who worked on the projects at two of the six districts honored this year. Besides Palomar in northern San Diego County, the Board of Governors recognized a five-year effort by Orange Coast College in Orange County as best project by a large district. In the first year alone, the college replaced 30,000 lamps and 12,000 ballasts with fluorescent and incandescent fixtures with energy efficient LED and fluorescent ones.

Key, a member of the Coast Federation of Classified Employees, AFT Local 4794, says Prop 39 has given school and college districts the resources to make serious investments in infrastructure. “This is a time to think big, to rethink whole lighting systems, not just change bulbs.”

The projects are expected to save districts tens of thousands of dollars in energy costs annually. The projects were completed by companies employing union workers who interfaced with electricians and other maintenance and operations staff familiar with the campuses.

The CFT was a strong supporter of Prop 39 in 2012. Four years later, the CFT adopted a Climate Justice Agenda, which includes divesting from fossil fuels, pushing for green legislation, and supporting union labor in new and upgraded infrastructure projects.