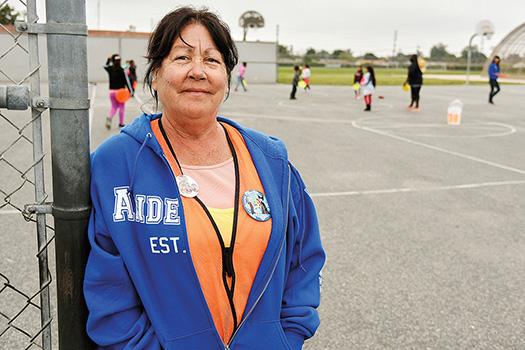 Lesa Estrada has been a noon duty aide at Lawndale’s Anderson Elementary since her son began kindergarten here more than 25 years ago.

“All three of my children attended Anderson,” Estrada said. “I’ve seen kids grow up and bring us their children. Now some are bringing us their grandchildren.”

Estrada is one of about 60 playground aides who work two or three hours daily at the Lawndale Elementary School District’s nine campuses. Their jobs often mirror staff positions, but state law specifically excludes them from “the classified service.”

That barrier may be falling.

Also, legislation working its way through Sacramento would open the door to union rights and new benefits for aides. “Part-time playground employees deserve the same protection and benefits as classified employees,” said Assemblyman Tony Thurmond, D-Richmond, the author of AB 670.

Part-timers are predominantly women, and are often the lowest wage earners on campus. Their duties are similar to services performed by staff, from supervising students during breakfast and lunch, to keeping peace on the monkey bars.

The noon dutys all love their jobs, but if you’re a nonunion employee in a school district, you don’t have a voice.

The job draws on Estrada’s energy, diplomacy, creativity, tenderness and grit. “I don’t go for bullying. If I see it, I handle it right away. And if I see a child sitting alone, I’ll approach them and find out if something is wrong. It might be a sign of bullying or a problem at home.”

Estrada begins her mornings with 45 minutes at Anderson’s front gate, making sure the 700 students enter safely and don’t leave campus after they arrive. After supervising a 30-minute recess she volunteers in classrooms, then she and the other aides monitor several shifts of children at lunch for an hour and 45 minutes.

“I’m here for the kids. They’re like our own children. That’s the way you must look at this job,” Estrada said. “If you’re here for the money, you’re wasting your time. I’m embarrassed to even say what I’m paid.”

Without union representation or a contract, part-timers are also frequently short-changed and otherwise mistreated.

“The noon dutys all love their jobs,” said Dan Meseraull, vice president of the Lawndale Federation, “but if you’re a nonunion employee in a school district, you don’t have a voice.”

Meseraull was spurred to action after his wife, Stephanie, a kitchen manager at William Green Elementary, related a sad story from an aide at work: The district promised the noon duty that it would pay her, but claimed there were no funds when the school year ended.

“And then my wife asked me, ‘Isn’t there something the union can do to help?’ That’s how this whole organizing campaign started.”

Although the Federation doesn’t represent the aides, who often work just two or three hours a day, Meseraull and President Carl Williams discussed the case and decided there was nothing to lose by raising it with administrators.

The Federation held the district to its word and the playground aide was paid, but Meseraull was just getting started. He put on his organizer’s hat and didn’t take it off until he had more than 40 signed union cards in hand. The noon dutys first contract proposal focuses on job security and an increase in pay.

In Sacramento, meanwhile, Assemblyman Thurmond’s AB 670 would remove an exemption under current law that excludes part-time playground positions from being classified employees. The CFT supports AB 670, which is sponsored by the California School Employees Association.

In 2002, the CFT sponsored similar legislation signed by then-Governor Gray Davis that remains the law. AB 2849 opened the door to official classified status for many part-time noon dutys who also working another staff position in the district.

AB 670 goes a step further by counting part-time playground workers as staff, even if they don’t have a second part-time classified job. The bill passed out of the Assembly Education Committee in April and was referred to Appropriations.

Follow the legislation! AB 670 (Thurmond, D-Richmond) would remove the exemption that disallows noon duty aides and playground supervisors from being counted as classified employees.