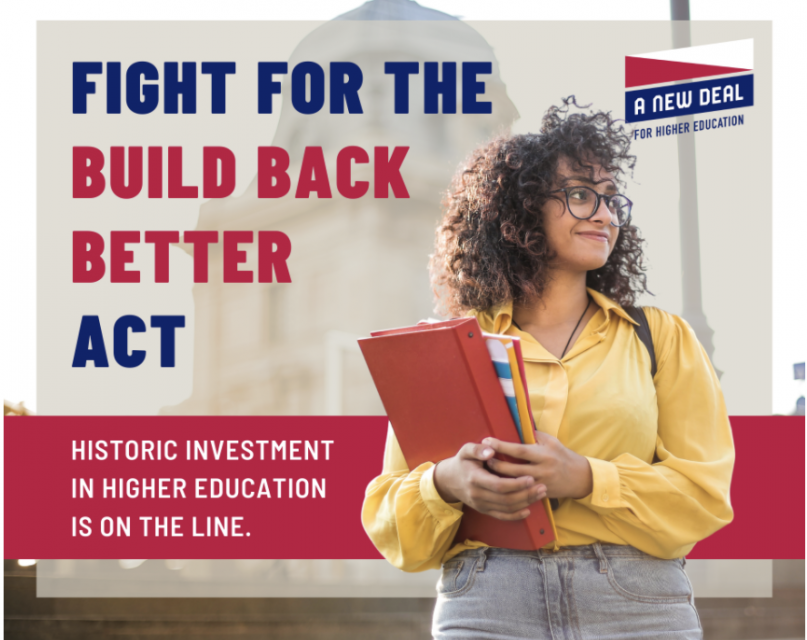 In a CFT Convention workshop held on March 10, local leaders in California talked about how they had addressed these issues at their colleges as well as about the overall AFT campaign to make higher education more inclusive and just. A couple of weeks later, during the Virtual Convention, delegates on March 27 overwhelming supported the resolution Rise Up, Recover, Rebuild: A New Deal for Higher Education.

In the workshop, the president of the Peralta Federation of Teachers, Jennifer Shanoski, talked about what her union did to take on pay equity at their East Bay campuses, achieving a landmark 100 percent parity, and chapter chairs at the San Mateo Community College Federation of Teachers, Rika Yonemura-Fabian and Doniella Maher, shared how they’d gotten students, staff, and teachers involved in fighting for smaller class sizes. The assistant director of AFT Higher Education, Chris Goff, went through the recently launched New Deal for Higher Education, a broad platform that takes on many of the issues workers in higher education are facing.

Alyssa Picard, director of AFT Higher Education, started off the session, talking about how access to higher education had changed the trajectory of her family. Picard said that with a new administration in the White House, she and others at AFT see encouraging signs for making changes in areas where they’ve long fought to, such as student loan debt.

Shanoski explained how her local had fought for pay equity so that part-time faculty members are compensated at a comparable rate to full-time ones. She laid out the steps of the campaign, including defining parity by taking a full-time salary and dividing it by the 35 weeks, talking one-on-one with full-time members, so they felt like it was their issue too, and doing targeted actions. Shanoski said that due to the outreach, full-timers took on the issue as their own, and there was a festive atmosphere at the local’s events.

“We tried to include everyone, and there was no tension between full- and part-timers,” she said. “We were so happy when this happened. It’s appalling that part-timers are not paid the same.”

When her San Mateo local organized a campaign for smaller class sizes, Yonemura-Fabian, said they kept in mind that they didn’t want to be just another social justice committee. Instead they organized an anti-oppression committee. They wanted, she said, to go beyond wages and benefits and think about how to be an anti-racist institution and how to make classes student centered.

“Labor issues are social justice issues, which are intrinsically related, ” she said. “Fair working condition for all members in the union is only possible if we unite against all forms of oppression— racial, gender, sexuality, and also around employment status of the two-tier system.”

After a teach-in and discussions, Yonemura-Fabian said the local decided to focus on class size, hearing from students that having access to the instructor was one of the most important factors in retention, especially for marginalized students, and that class size is closely tied to faculty work conditions.

Maher said the local brought a resolution to the board of trustees asking to have class sizes reduced by 25 percent during the pandemic as well as a longer term strategy. They haven’t heard back yet, and they’re putting together a survey for faculty about class sizes. She says one thing they learned is to take a little more time to build support.

“We’re union organizers, and we want to do things now, like yesterday,” she said.

Goff said with the new Congress and the Biden administration, the AFT has political momentum to do bold things for equitable higher education.