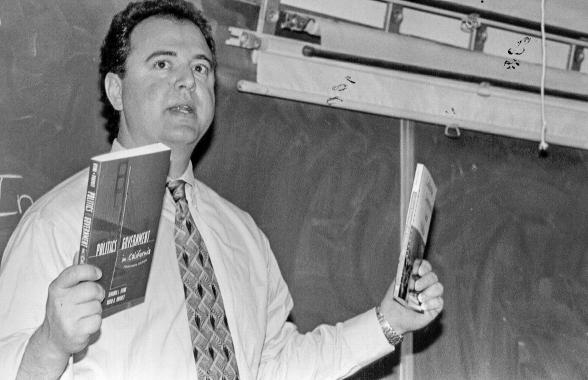 Most teachers speak with authority about the subjects they teach but Glendale Community College’s newest political science instructor speaks with the voice of personal experience as well. Adam Schiff knows the workings of California state government from the inside, as well he should — he’s Glendale’s state senator.

“I try to engage my students in discussion,” he says, “and because they come from widely diverse backgrounds, there are a lot of different points of view.”

Schiff had some teaching experience before embarking on the current course. He helped train law enforcement personnel for the Department of Justice, even traveling to Eastern Europe to conduct seminars for parliamentarians. But this is his first formal teaching assignment at a community college.

Mona Field, a 15-year veteran political science instructor at Glendale, and president of the Glendale Community College Guild, AFT Local 2276, invited Schiff to take the plunge. “I heard he wanted to do some teaching,” she says. “We knew he wanted to remain connected to education, and I thought it would be a wonderful opportunity for the students.”

When Schiff began teaching this fall, he was treated like any other instructor. He received the same package that greets other new teachers, including a form for joining the union. He signed it and returned it right away. “I wanted to show support for faculty members at the college,” he explains, “and I believe the Guild does important work.”

Schiff was also evaluated like any other teacher. Field was his faculty evaluator. She thought he was “right on target,” although she counseled him that his description of what he wanted his students to cover in their term paper was a little too brief.

Schiff also received evaluations from his students. “They told me that they felt having me for a teacher helped them to get the inside story,” he says. “I was really aware of this, and tried to give them the benefit of my own personal experience as a legislator.”

Schiff believes he benefited from his teaching experience as much as his students did. “I never attended community college myself,” he says, “so this was a good introduction to the system. I have a lot better sense now of the importance of issues affecting the system, like the ratio between faculty and students. If I had had 40 instead of 20 students, our discussions would have been less intimate, with less time for individual attention.”

As a part-time instructor himself, he became aware of some of the limitations which part-time employment imposes. “Part-time faculty make a great contribution,” he explains, “but there are also certain things missing. I wasn’t on campus much, and I recognize that a part-timer, I was less connected to the students and the institution.”

Schiff says he would recommend teaching community college to his fellow legislators. “It’s very important to experience things first hand,” he concludes. “When we consider legislation affecting teachers and the education system, it’s good to know from personal experience what the impact will be.”