Part-timers are still sticking with their union 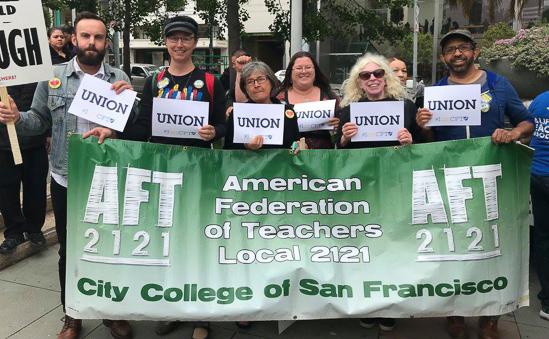 On June 27, the storm clouds were gathering. The Janus v. ASFCME decision had just come down from the U.S. Supreme Court in a 5-4 ruling, overturning 40 years of legal precedent and marking the abrupt end of union fair share, or agency fee, for public employees.

Now non-union members who benefit from the hard work of unions who still represent them at the bargaining table would no longer be required to pay their fair share.

Part-time faculty members, who are paid less and have fewer union protections than their full-time counterparts, could have turned away from the union, but instead adjuncts have embraced their unions and taken a solid stand against this anti-union ruling.

In a recent query of more than 10 AFT local unions a clear and resounding pattern emerged – part-timers are sticking with their unions, and in many cases, realizing the significant gains unions have made for part-timers, are becoming members whereas they had not before.

Take the pledge to stand with your union today!

The AFT Guild for the San Diego and Grossmont-Cuyamaca Community College Districts, representing between 3,000 and 3,500 adjunct faculty at five campuses, and multiple continuing education and college extension sites, has experienced a loss of only four adjuncts since June. Yet between then and September 7, the Guild added 219 members to its ranks with over 65 percent of new members being part-time faculty. 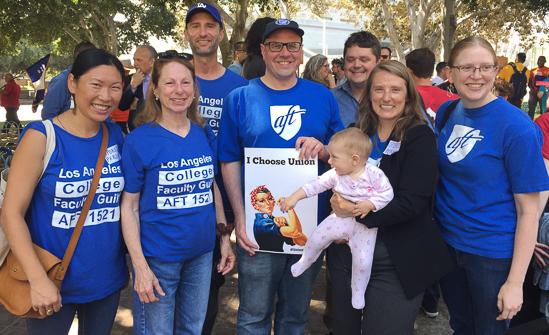 As for fee payers, who as a result of the Janus decision, were immediately moved to non-member status, a number of them have contacted the union and asked to be signed up as members, according to Tina Sólorzano Fletcher, organizer and membership coordinator for the Guild. This trend has also been observed by organizers at City College of San Francisco.

Los Rios has increased its adjunct membership in the months leading up to and following Janusby “several hundred,” according to Federation President Dean Murakami. State Center has 30 new adjunct signups. During the month of August alone, San Francisco added 50 new adjunct members.

In Orange County, the Coast Federation of Teachers and Adjunct Faculty United reported no adjunct drops.

Both leading up to and following the Janus decision, most locals stepped up their organizing activities. Adjunct Faculty United launched two membership drives last spring prior to Janus, and are planning three more in November. State Center has another membership drive in the works. Murakami said that to expand its membership push, Los Rios had set aside more reassigned time or stipends.

“It’s easy to assume that prospective members might find house visits obtrusive, but it’s quite the opposite, according to organizer Jessica Buchsbaum, who says that new faculty are “quite impressed” when the union knocks on their door.”

Perhaps the most robust membership push is underway in San Francisco where, having taken advantage of the new employee orientation opportunities for unions contained in last year’s Assembly Bill 119, organizers reach out to new hires, and, as part of their drives, employ electronic resources such as a digital membership form, and even engage in one-on-one house visits.

It’s easy to assume that prospective members might find house visits obtrusive, but it’s quite the opposite, according to organizer Jessica Buchsbaum, who says that new faculty are “quite impressed” when the union knocks on their door.

Though concerns remain, AFT local unions are navigating the new landscape with apt skill. One thing is clear – community college part-time faculty are sticking with their unions, and in the process not simply keeping them strong, but making them stronger.