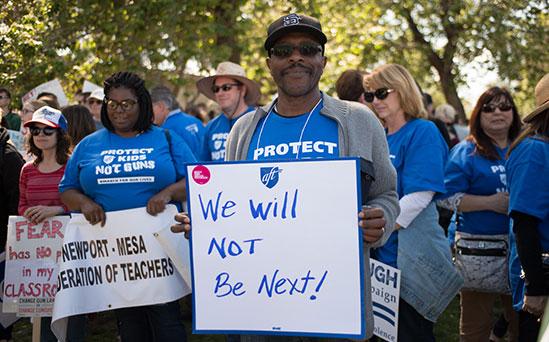 “No one should ever have to go to the police department to identify their child,” Frazier told 5,000 students, teachers and supporters at the March for Our Lives rally. “I never knew the man my son was meant to be.”

“These are kids. Treat then with respect and they will show respect to others”

Frazier recounted how his 12-year-old son Keith was sitting in a parked car with his stepbrother, then 17, in front of their home about a dozen years ago. Gunfire riddled the vehicle and both youths were shot, but the child was hit seven times in the head and died.

“It took me awhile to make any sense of the incident,” he recalled later. “I had murder in my mind, but I needed to keep my composure. Being back at work with the kids gave me strength. My job is to help as many students as I can.”

The veteran supports what he called “obvious” gun control measures, including more extensive background checks on gun buyers, and is warming to the idea of raising the minimum age to buy a gun from 18 to a more mature 20-something.

Frazier is a member of United Educators of San Francisco, and currently serves as sergeant-at-arms. Fellow executive board member Anabel Ibañez said she could see how Frazier’s words moved people at the rally, including delegates to CFT Convention.

“A.J. really understands what gun violence has done to our schools and communities, and I hope that talking about this terrible experience was empowering for him,” Ibañez said.

Frazier — who does not carry a gun at work — said violence is not common on campus, although neighborhood gang conflicts and mental health issues can spark dramatic situations.

“These are kids,” he said. “Treat them with respect and they will show respect to others.”