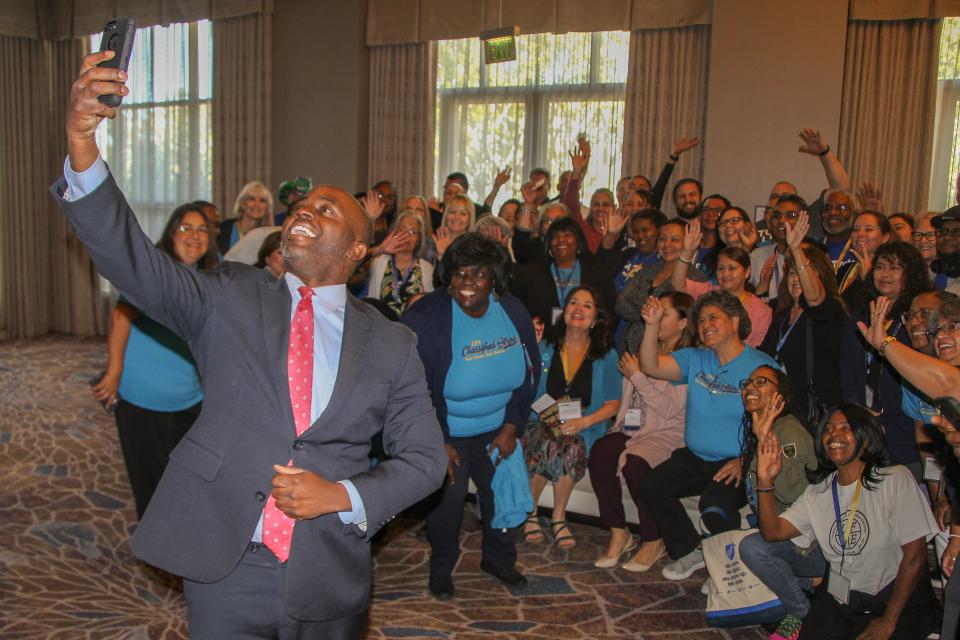 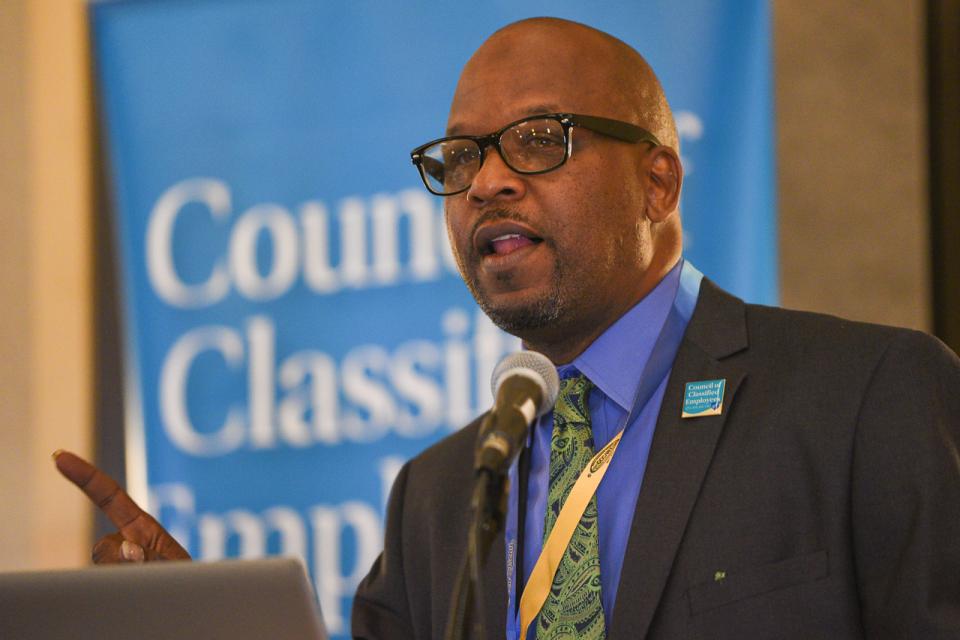 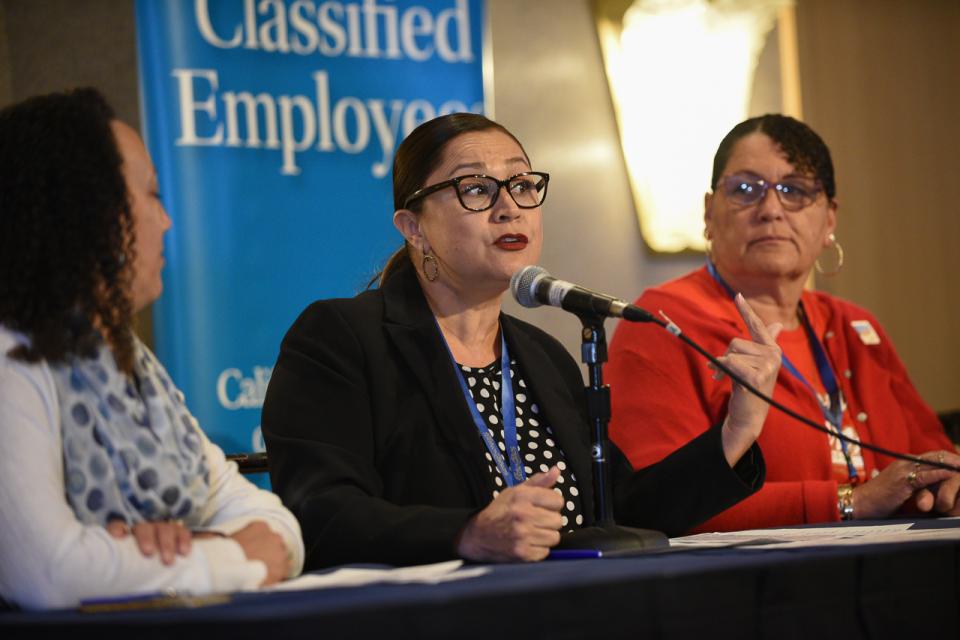 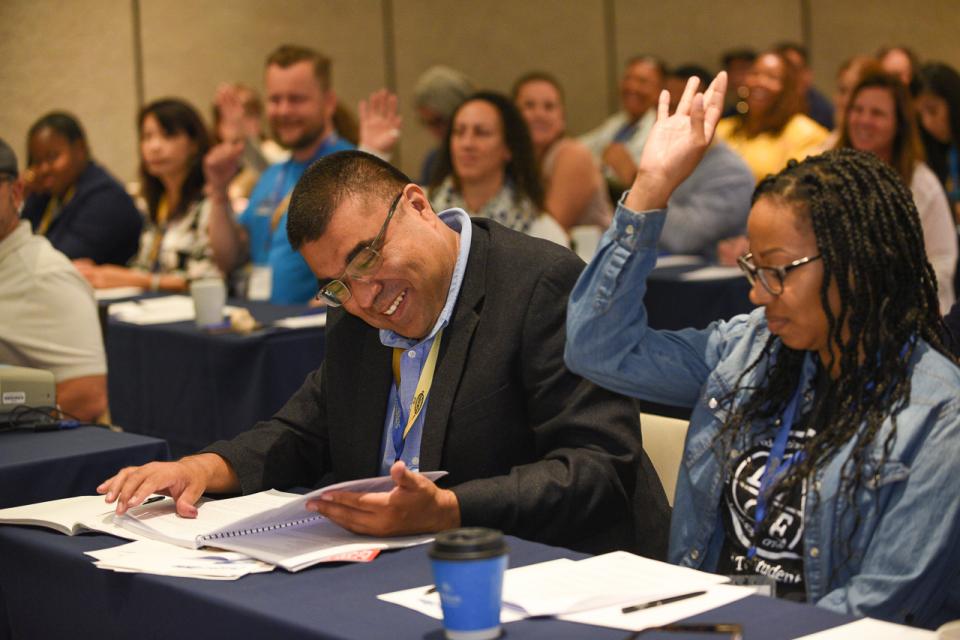 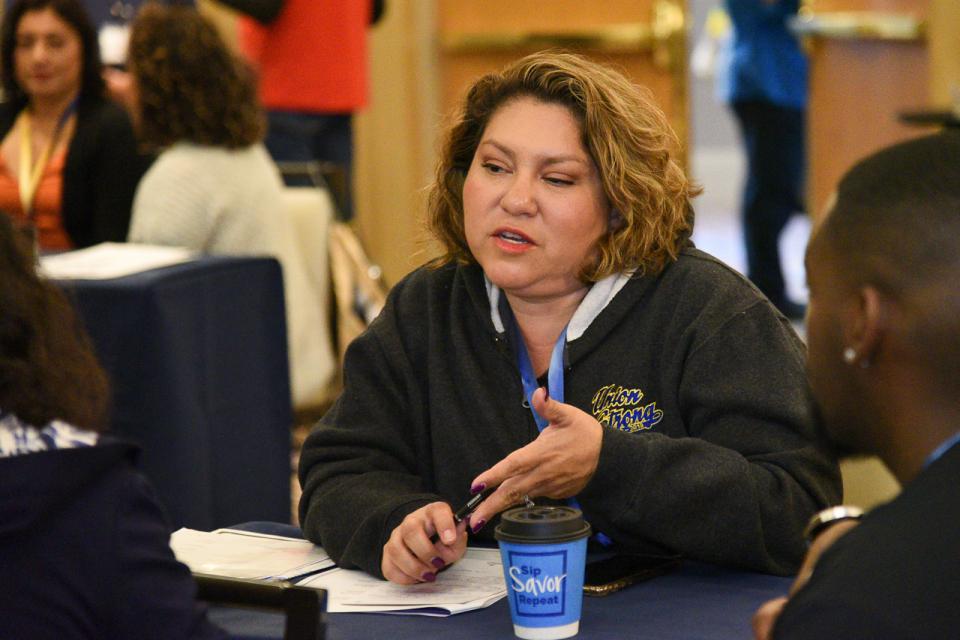 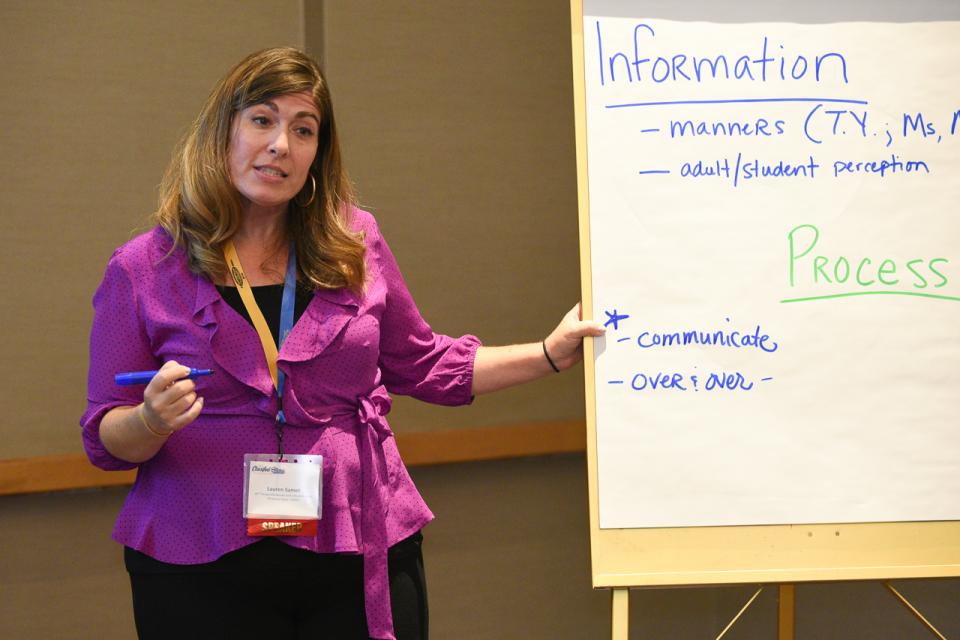 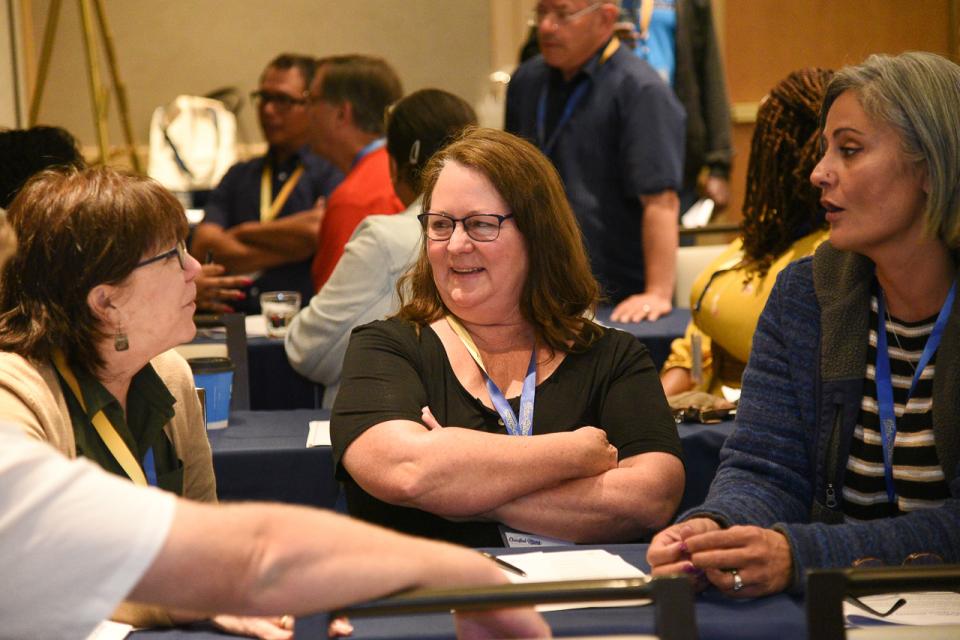 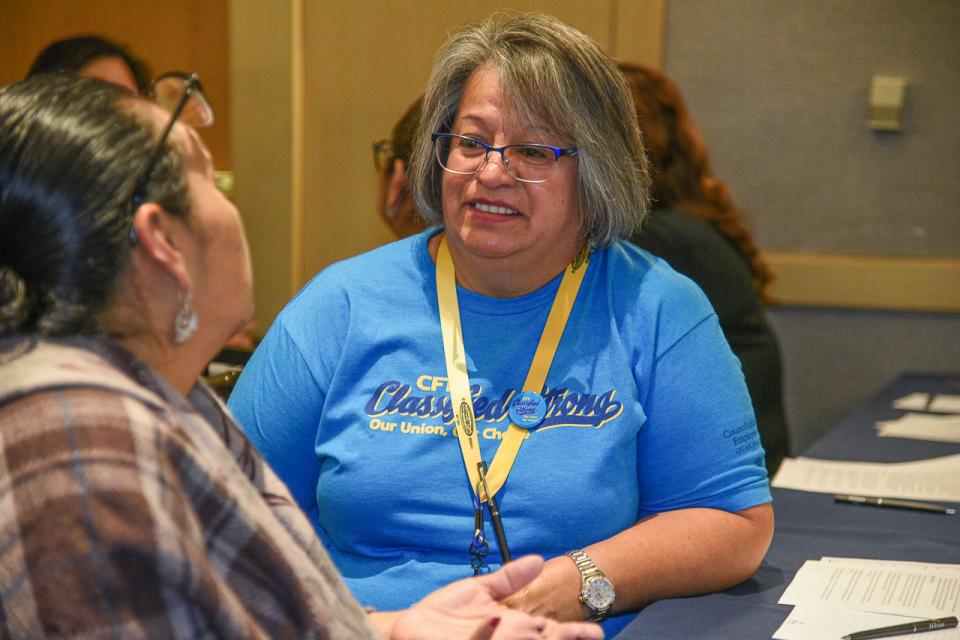 In between, members attended workshops that Williams said he hoped would “touch the body and mind, and address things that people can take back and use in their union locals.” Sessions ran the gamut from “Mindfulness” and “Food Fundamentals” to “Know Your Rights” and “LGBTQ Cultural Sensitivity.”

First-time attendees were among the most enthusiastic participants, and several rose to the microphone to express their feelings during the weekend conference.

Catalina Puckett-Mendoza has taught in Head Start programs for 19 years. She is one of about 350 employees in nearly three dozen Plaza de la Raza programs dotting Los Angeles County, and a member of AFT Local 1475.

“I have always been a union member and I regularly attend my local meetings, but I have never been to a conference like this,” Puckett-Mendoza said. “The workshops were great. Now I want to learn more about my rights and how to organize and apply it at work.”

Earlier this year, Thurmond reminded the audience, then-incoming Gov. Gavin Newsom tapped him to lead a state task force looking into charter schools, a sweet irony that proved — once again — that elections have real consequences.

After nearly a year on the job, including a supportive role in the landmark Los Angeles schools strike, Thurmond is more dedicated than ever to getting schools the resources and services they need to educate students and support families.

“You show your values in a budget, and California has chronically underfunded public education,” Thurmond said. “If I get nothing else done during my term, I want to get funding for our students up to number one in the nation.”

We can reach that ambitious goal, Thurmond said, pointing to a lobby display for Schools and Communities First. The CFT-backed initiative will close commercial property tax loopholes that benefit a fraction of corporations and investors, without affecting homeowners or renters. SCF is expected to reclaim $12 billion per year for K-12 schools, community colleges and local services.

The initiative needs just under a million valid signatures to qualify for the November ballot. Organizers are aiming for a safe margin of 1.6 million signers, and are counting on volunteers to gather 461,000 of those signatures. 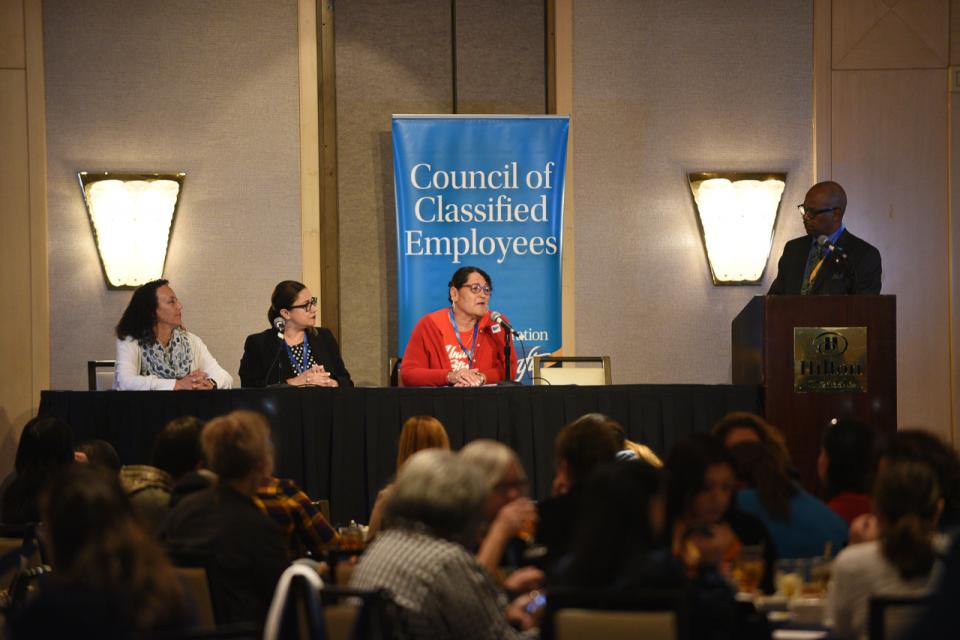 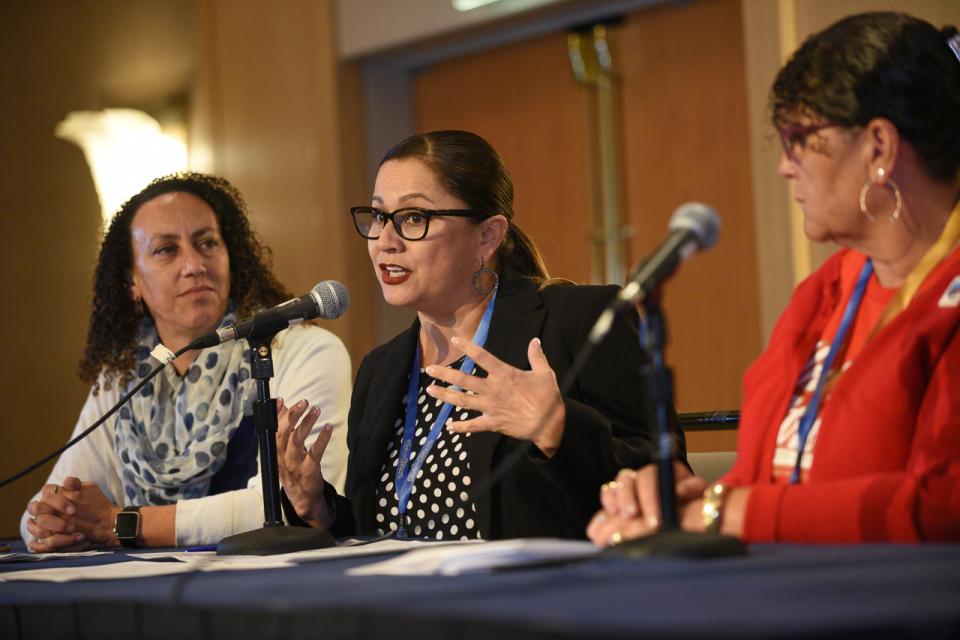 Saturday highlights included a panel of three local union leaders who described their recent political work on campus and in their communities. The panelists, like the audience, included seasoned activists and newcomers.

Carolyn Samoa, vice president of paraeducators for United Educators San Francisco, has been a para for 30 years.

“The board of education is always most important for UESF. I know every board member and supervisor, and I make sure they know which issues matter most to us,” Samoa said. “But we’re active in every race. If we weren’t, those candidates wouldn’t know our priorities.”

Today, the housing crisis is on most Californians’ minds, including classified employees. More than half of UESF members live in San Francisco, Samoa said, but the cost of living is taking a toll on faculty and staff, as well as students and their families.

“We are short 60 paras in San Francisco. People can’t afford to live there, so they don’t stay, and we have a lot of people living homeless.”

UESF members rallied behind Measure E, which allows the city of San Francisco to rezone school district land to build educator housing. About 150 units are already on the drawing board, including 45 to 50 units for paraeducators.

“It’s taken five years to get to this point,” Samoa said, “and Measure E won’t take effect until 2023, but we’re finally building the first educator housing.”

Monica Casey said she never thought about politics when she began teaching in Daly City 20 years ago.

“It’s different now, obviously,” said Casey, head of the Jefferson AFT Federation of Teachers. “I didn’t know a lot about the politics of our little community then, and I’m still learning.”

Casey came from the certificated track, and has played various roles in the Bay Area school district. “Those experiences taught me about different people and jobs. We’re a union of teachers and staff, certificated and classified.”

Local 1481 recently started a COPE program and helped pass a ballot measure to build housing for anyone in the district who needs it. “We won by 250 votes, and will break ground in January.”

The Daly City local also put some economic punch behind their political vision with a COPE fund that generates $1,000 monthly through voluntary paycheck deductions. Those funds can only be used in California elections, Casey said, easing concerns by some members that funds will bankroll presidential candidates in other states’ primaries.

Cindy Lopez met one-on-one with almost every classified employee at El Camino College during the Building Power campaign. Many members stretched their outreach muscles during the CFT drive leading up to the U.S. Supreme Court’s Janus decision.

“At El Camino, we have red, we have blue, we have purple — we have a little bit of everything,” said Lopez, who took office as Local 6142 president in July. “Those reds have students in public schools, too, and we all want to support candidates who support education.”

Lopez advised classified activists to make the most of members who volunteer for campaigns. “There’s a hat for everybody. I know what I’m good at, but I also know what I’m not good at. We have to match people’s skills with the jobs we need to get done.”

She also works closely with faculty members on campus. “Our faculty has a sister union and our CFT field rep sits at both tables. When we held a negotiations training with them, our district saw us standing together and the message was clear: When we stand together, we stand stronger.”

Finally, she said, get involved with your local labor council. “Many delegates are plumbers and other workers who live in our school districts and communities. They’re a great resource. When you have a trustee race, they can be there to support you.”

Lopez sees great political gains ahead, but warned that the clock is ticking.

“If there’s a silver lining to this political moment, it’s that people are showing up, getting involved, and supporting candidates who back our educational issues,” she said. “We have to work smarter. We have to get plugged into these networks. We only have a year for this election. We don’t have time to waste.” 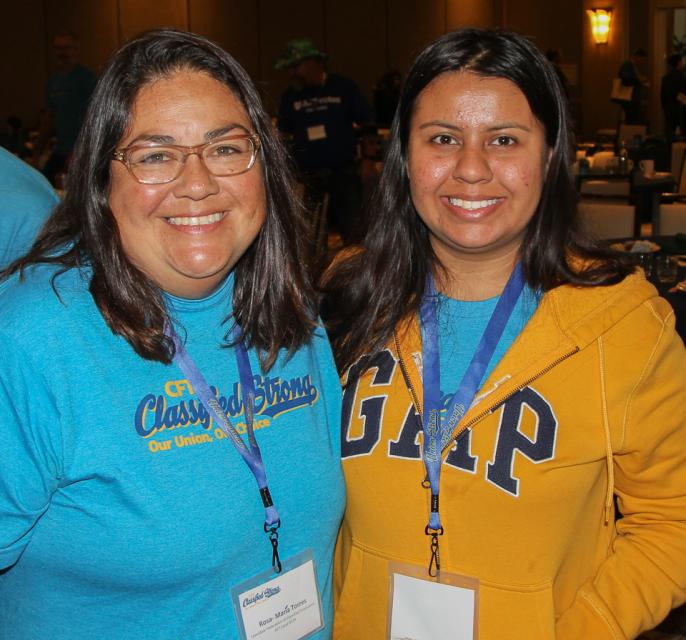 The next generation is stepping up

One long-time conference attendee marked a significant change this year.

Iris Torres grew up in Lawndale schools and the district’s Classified Federation. Torres’ mother, Rosa, is a seasoned activist in AFT Local 4529. This year both attended the conference as dues-paying union members.

“This is my first official time at this conference,” the 20-year-old said, “but I’ve been coming here since I was 11. This union raised me. People my age may worry about their next Instagram picture. I’m worried about how we can regain our strength.” 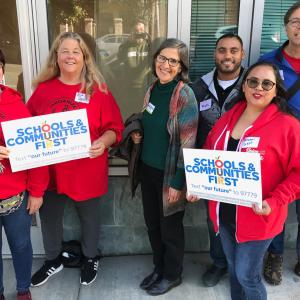