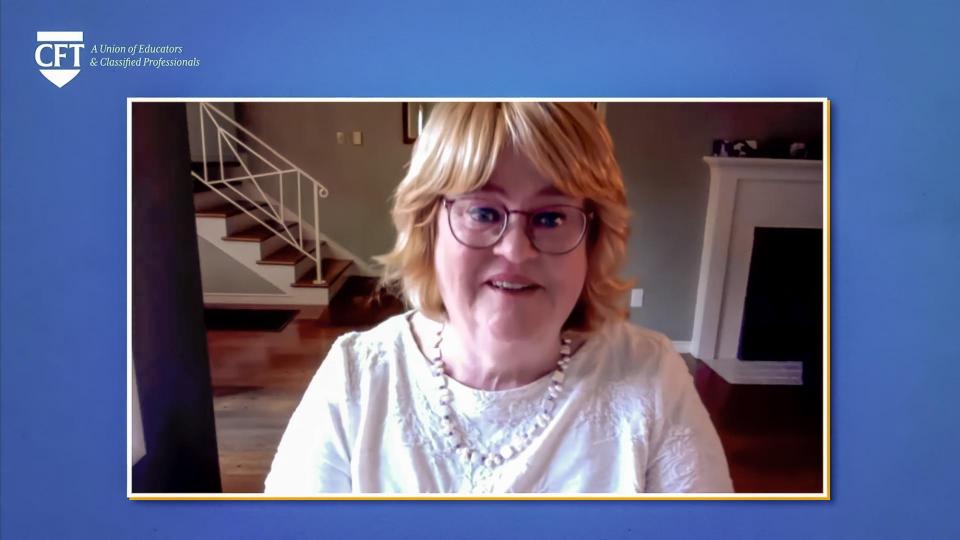 Equity is at the heart of everything that Cathy Campbell does. She keeps student needs at the center of any conversation while she is fighting for her members. She holds teachers in the highest regard and believes they are the true experts in the mission of education. She is able to connect the daily experiences of the classroom teacher to wider political action.

Because of these traits, Cathy has been a transformative leader for the Berkeley Federation of Teachers and has extended her vision of equity and social justice statewide.

Cathy served as president of the Berkeley Federation from 2007-19, after serving as vice president from 2005-07. That is a long time to be in such a difficult position. During many of those years, she also served as a CFT Vice President and on the Executive Council of the Alameda Labor Council.

While local president, Cathy made sure that educators were on every district committee and she elevated teacher voices in every important district decision. She collaborated with the district when they were on the right track, but used the power of the union—along with her own strong and strategic persuasive skills—to push back when necessary. She gave countless speeches before the school board to inform the public and win support for union demands.

She developed a “Quality Education Agenda” to help the local articulate a student-centered vision for the district. Through an ongoing series of conversations within the union and with the larger community, Cathy helped align union and community needs. The QEA is a touchstone for the BFT, a living document that still guides the local when it takes key positions.

Cathy also created a Teachers of Color Network and an Organizing Team. Through its advocacy, the Teachers of Color Network won crucial changes in district hiring and retention. The Organizing Team ramped up the effectiveness of BFT contract campaigns and political campaigns, in part through the use of vibrant artwork and grassroots activism that placed it strategically throughout the community.

Cathy was constantly on the lookout for those who could be future leaders. Once she found them, she recruited, trained and supported them so that they could be successful. She increased the union’s capacity by empowering site reps to assist members at their worksites. One key tool in this effort was the creation of a long list of regularly updated FAQs where members could readily find information they needed to advocate for themselves and their colleagues.

Cathy consistently sought ways the BFT could be involved in any progressive issue; for example, raising the minimum wage, protecting undocumented families, advancing environmental justice, rallying for Black Lives Matter. When members approached her with ideas about activism, she never told them she didn’t have time to help. Rather she sought ways to encourage them and increase union capacity.

Statewide, Cathy elevated the CFT’s role in progressive causes. She made the case that the labor movement is the vehicle to win healthcare for all, reduce poverty, and increase state revenue. She motivated the BFT to take on these big causes as part of what unions do. When there was an opportunity to make something happen statewide, she made sure BFT was a part of it. Under Cathy’s leadership, the entire local membership mobilized to the State Capitol to demand more funding for public education and charter school reform.

Cathy is known to take a controversial position and fight for it. She does not shy away from hard conversations and oftentimes calls each and every participant on the phone ahead of time to prepare for a hard meeting. She is always three steps ahead in every possible way.

Cathy lives and breathes union activism and holds the highest standards for the work she does. Her thoroughness and strategic focus have won great contracts for Berkeley teachers, passed local ballot measures, and enlisted supportive school board members.

Even during the pandemic—after being away from the classroom for many years—and then being thrown into a distance learning environment, Cathy still joined the BFT Negotiations Team to make sure the transition to in-person education would be in the best interests of students and teachers. She never takes credit for any of her hard work.

Cathy remains focused on the collective efforts of members rather than her own achievements. She is patient but never takes her eyes off the prize—a more equitable public school system and just society with strong, effective and unified teacher voices playing an integral role so the most vulnerable students can succeed.