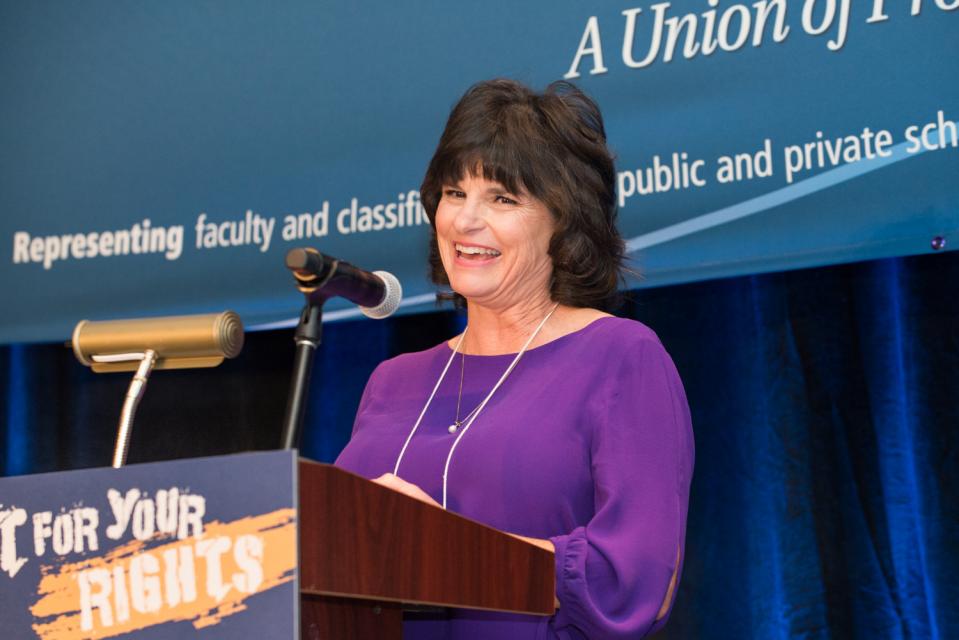 A woman’s place is in her union, Morgan Hill Federation of Teachers President Gemma Abels told attendees at the CFT Convention before introducing this year’s winner of the Women in Education Award, Sandra Larsen, president of the Petaluma Federation of Teachers, who led a successful strike last spring, the first in the union’s history.

“Sandra Larsen is a strong woman, a passionate unionist and a compassionate educator,” Abels said, telling the crowd that Larsen’s father was in the union for letter carriers in Richardson, Texas, where she grew up. “She taught home economics and science and life skills at Petaluma Junior High, which we all know means she is a saint.” 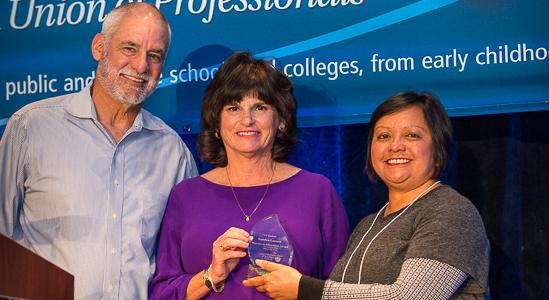 Larsen went from treasurer to chief negotiator to president of her union, Abels said, and her mobilization of the members ended in a 3.5 percent raise. Larsen also fought for them in the courts, filing two unfair labor practices.

Larsen, who had just turned 60, said she was raised in the South to be sweet –– but she wanted more respect and better pay for her members, so she spoke up.

“Sometimes you need to stand up and step out of your comfort zone and do what’s right,” she said. “CFT came in right away and helped us set small goals, like getting 50 people to a school board meeting and our strength grew.”

The union built support in the community, Larson said, so when they asked parents for help – to make calls or show up to meetings – they would do it.

“When it became clear it was time to call a one-day strike, 95 percent of members participated,” Larson said. “If a 60-year old woman born in Richardson, Texas, can do it, anyone can.”