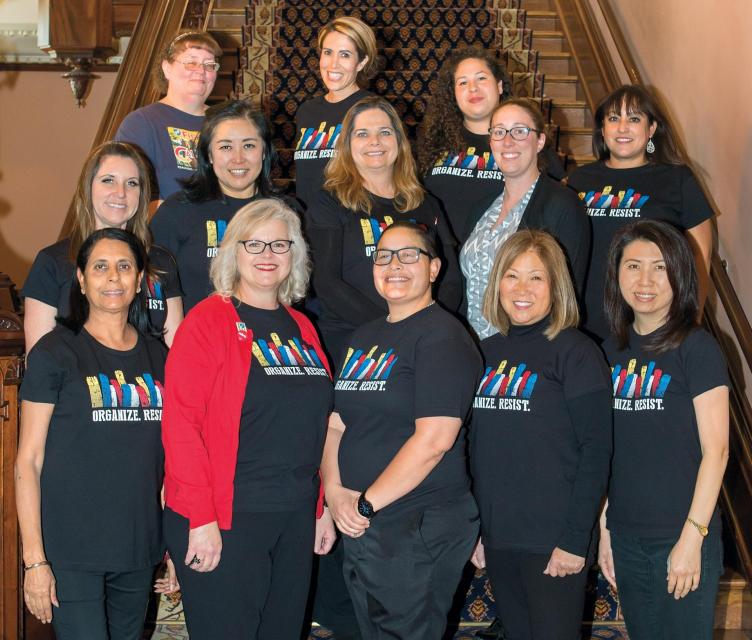 Connie Nam used to grumble about union dues, until as a participant in the local’s Teacher Leaders program, the veteran fifth and sixth grade teacher learned about her union’s legislative advocacy role. Now, amidst the war on public education, she says, “It’s worth it. Nothing comes for free.”

Starting last fall, 15 members of the ABC Federation of Teachers began attending meetings two evenings a month, according to Tanya Golden, who conducts the local’s Teacher Leaders program. The AFT program is designed to identify and train highly motivated educators who will take leadership roles in their schools, unions and communities, and generate support for public schools and unions.

At first, most teacher participants, who are already leaders in their schools, expect only professional development, says local President Ray Gaer. “But we are also training them in the big picture of unions being advocates in schools. We lay the foundation for teachers to grow in their careers and to have an understanding of how the union is important.”

Participants choose a professional research topic, then share their findings with the group, and learn about local issues. Golden, the union’s executive vice president, called the program “a great way to grow a core of member advocates. We can then ask them to speak about education issues, serve on committees, and advocate for union interests and actions.”

In today’s political climate, Nam sees the importance of writing as a foundation for critical thinking. She is researching writing development and instruction and reports consistent improvement in her instruction and student performance.

Nam has also taken on a more active role in the union. “My eyes are opened to the broader issues that affect everything we do,” she says. She keeps up with relevant issues, corresponds with elected officials, and urges her colleagues to do the same. At CFT Lobby Day on January 30, Nam learned more about the legislative process and felt empowered to talk forcefully with state legislators about education issues.

Golden is proud of ABC’s greater participation in this year’s Lobby Day and credits the Teacher Leader program. “We’ve always had a few members participate.” But this year 13 teacher leaders, clad in CFT “Organize, Resist” t-shirts made the early morning trek from southeast Los Angeles County to Sacramento.

Rachel Jimenez learned the importance of communicating with legislators. “Just by taking two minutes out of your day,” she says, “emailing or phoning can make a difference of whether an important bill passes or not. One person isn’t going to make a difference, but all of our single voices can become this one huge voice.”

“Just by taking two minutes out of your day, emailing or phoning can make a difference of whether an important bill passes or not. One person isn’t going to make a difference, but all of our single voices can become this one huge voice.” — Rachel Jimenez

Jimenez is a middle school special education teacher, and says, through the program she has learned how her district and union operate, and how the union supports staff. With a better understanding of budgets and how collective bargaining works, she is committed to advocating for the union at her school. Jimenez worries about Janus v. AFSCME, the case before the Supreme Court that may overturn the ability of public employee unions to collect fair share fees from non-members.

Jimenez is researching charter schools. With anti-public education forces pushing vouchers and privatization, she says, “Corporate billionaires are trying to weaken public education and our unions. We must fight for better classroom environments and working conditions.”

Second grade teacher Kelley Forsythe says the program has given her the added confidence to serve as union site rep. “It’s incredibly valuable to sit in a room with other educators at varying levels of experience and talk about what’s going on.”

Forsythe said she didn’t get involved before because she lacked that confidence. “I didn’t feel like I could hold a conversation about union business or federal issues as well as I would have liked to,” she said. “I wanted to become more knowledgeable, and to become more active instead of sitting on the sidelines.”

Things are different now, Forsythe says. She feels equipped to have discussions with members and administrators. “I can knock on someone’s door and have a more authentic, engaging conversation with them as a direct result of the Teacher Leader program.”

Golden looks forward to growing the Teacher Leader program in coming years. “When teachers across the district who didn’t know one another before meet and talk about their schools and experiences, they learn from one another and build relationships — and our union gets stronger.”