A Tale of Hope and Caution: How three Latin American nations are defending public education 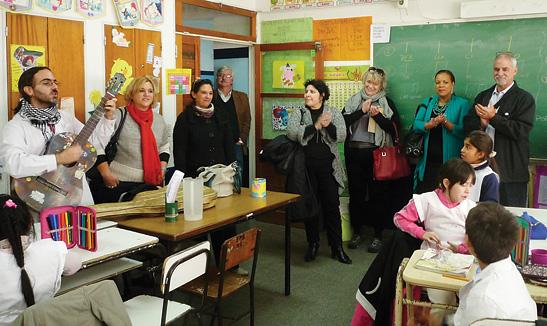 As part of AFT’s ongoing effort to build alliances with educators and trade unionists around the world, President Randi Weingarten led an AFT delegation in May to meet education union leaders and other unionists in Brazil, Argentina and Chile. I joined them as we looked at their multi-year effort to defend and expand public education, and to develop a response to attacks.

For years, globalization combined with a worldwide economic crisis has led many governments to push austerity measures designed to shrink public spending permanently. Brazil, Argentina and Chile experienced the horrors of military dictatorship. In Brazil in 1964 and Chile and Argentina in the 1970s, democratically elected governments were overthrown by the military. Then followed years of repression, torture and the murder of labor leaders, community activists, elected officials and others.

Military dictators, most notably General Augusto Pinochet in Chile, implemented the economic policies championed by Milton Friedman and other economists at the University of Chicago that came to be known as neo-liberalism. That approach, like the one now espoused by anti-government advocates in the United States, systematically curtailed the rights of trade unions, dismantled the public sector and depressed labor costs to facilitate ease of investment and maximization of profits.

Brazil’s largest industrial city, Sao Paulo, provided our first look at the failure of that model to deal with economic and social problems. It also exemplified the success of the powerful populist movement that emerged in the early 2000s to challenge the nation’s elites.

In 2002, Luis Ignacio de Silva, a charismatic union leader with a fourth-grade education, was elected president on the Workers Party slate, a coalition of trade union organizations and progressive forces. With broad popular support, Lula, as he is known, increased spending for public education, expanded mandatory public education from age 4 through 17, and established quotas to provide more of the historically disadvantaged Afro-Brazilian population with higher education.

According to union leaders we met, the economic policies of Lula and the Workers Party raised more than 40 million people, from a population of 200 million, out of poverty.

The Workers Party continues to govern the country with Dilma Rousseff, but labor leaders are clear about the importance of independent trade unions. During our stay in Brazil we met with leaders of the public sector union, the National Confederation of Workers, and the national education union, the National Confederation of Education Workers, which had just ended a three-week strike.

Brazilian educators are fighting for better pay and retirement benefits and have established a goal of mandating that 10 percent of Brazil’s gross domestic product be spent on public education. Under Lula, the national expenditure increased from 3.8 percent to the current 5.2 percent.

Brazil has no overarching education policy, so educators struggle against regressive education reform on a state-by-state basis. Many Brazilian educators are inspired by their late countryman, educator and political activist Paolo Freire. His writings on the importance of literacy and the role of education serve as a guide to political empowerment for poor and working class communities, as seen in the schools we visited.

In Argentina, we met with leaders of the Confederation of Education Workers of the Republic of Argentina. Educators there face insufficient funding, poverty, child labor, inadequate health care for children, and high student drop out or “push out” rates.

In the early 2000s, unemployment rates hovered around 35 percent, leading to protests and government repression. In 2003, Nestor Kirschner was elected president, signaling a shift away from the pro-market policies of the military dictatorships. With the support of unions, Kirschner launched the White Tent campaign, calling for increased funding and greater access for public education.

The White Tent campaign took the debate about education and economic policies to the community. Because of that effort, today Argentine law stipulates that education is a social right and public good and the government has a responsibility to implement mandatory education for Argentinians from 4 to 18 years of age. Educators also won collective bargaining and seniority rights, and a voice in class size. They have been pushing back on the use of student test scores to evaluate teachers.

Before we left the country, we visited mothers and grandmothers of the Plaza de Mayo, whose vigil in front of Casa Rosada, the office of the president, recalled the thousands who were “disappeared” by the dictatorship.

Our final destination, Chile, reminded us once again how neo-liberal reforms can fail. Beginning with the Pinochet dictatorship, Chile has dramatically turned away from public education toward privatization. Chilean families now have three options for K-12 education: non-subsidized private schools, government-funded vouchers for private schools, and public schools.

According to many of the people we talked with, private schools are universally viewed as the best education available and public schools seen as the worst option. The majority of Chilean students attend some form of private school with the poorest children relegated to public schools, exacerbating class divisions.

Yet students have played a critical role in fighting privatization efforts. The March of the Penguins (referring to the uniforms worn by Chile’s K-12 students) saw more than 700,000 students take to the streets in 2006 and demand a change from the pro-market education reforms that have plagued the country. Young adults rail at the cost of higher education, unaffordable for most Chileans.

In the port city of Valparaiso, our AFT delegation joined a student demonstration, part of a national day of protest directed at President Sebastian Piñera’s state of the union speech. Ironically, the initial student mobilizations began during the administration of President Michelle Bachelet, a member of the Chilean Socialist Party. Students and labor were critical of her administration’s unwillingness to break with the neo-liberal policies of previous administrations.

The ongoing mobilizations of students and educators can shift Chile away from the privatizing trajectory of past decades. In November, Chileans will vote for a new president with two female candidates vying for the top spot. Bachelet, whose Air Force general father was tortured and killed in prison for refusing to go along with the Pinochet coup in 1973, has made tackling Chile’s income disparity a prime focus of her campaign. Bachelet proposes changing the Chilean constitution (altered during Pinochet’s regime) to finance a free and universal education system.

By establishing ties to educators in other nations, AFT is raising awareness about the international attacks on public education, the public sector, and workers everywhere. The experience of our Latin American colleagues fighting economic policies that have ground millions into poverty offers hope that by patiently forging broad labor-community alliances we can build the political power necessary to create equitable workplaces and just societies.