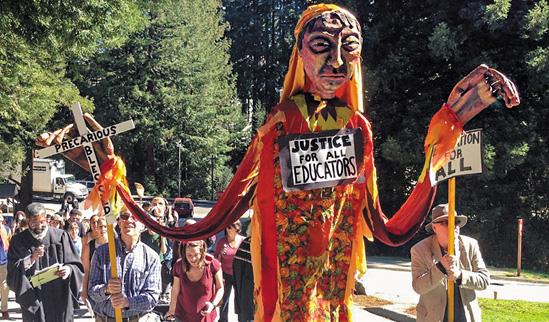 National Adjunct Walkout Day began at UC Santa Cruz with lecturers lined up behind the large puppet of “Saint Precaria.” They then walked through the wooded campus to the amused response of students.

The lecturers posted their chosen saint’s image on a webpage, pledging below it “solidarity with adjuncts across the nation. UC Lecturers begin our journey out of darkness and into the light of a just contract: Saint Precaria’s Pilgrimage begins as we walk the campus, holding high our icon saint, bringing awareness to the working conditions of the Precariat — proletariats of academic labor known as Lecturers or Non-Senate Faculty.”

Ellen Schrecker, professor of history at Yeshiva University, called it “absolutely a brilliant tactic” in a Huffington Post interview. “Adjuncts need to inform the public, especially their own students, about their situation and the precarity… of their employment, and how it is impacting their education. Students don’t know how terrible their working conditions are.”

The day of action (hashtag #NAWD on social media) sparked demonstrations across the country on February 25, highlighting the crisis of insecure, low-paid jobs in higher education. According to one analysis, in 1970 full-time tenured professors, with guaranteed jobs and decent salaries, accounted for 77 percent of the faculty in higher education. By 2009 part-time instructors were in the majority, working at wages far below the tenured level, and often having to reapply to teach the same course every year.

“Adjuncts need to inform the public, especially their own students, about their situation and the precarity… of their employment, and how it is impacting their education. Students don’t know how terrible their working conditions are.”

Last year, Dan Kovalik, a lawyer for the United Steel Workers in Pittsburgh, exposed the bitter experience of Margaret Mary Vojtko. At 83 she’d been an adjunct French teacher at Duquesne University for 25 years, but when she contracted cancer she had no health benefits to pay for radiation treatment. Teaching three classes a semester, she was making $25,000 a year. Then the university reduced her to one class. Her electricity was cut off, so she worked nights at a fast food restaurant, sleeping in an office during the day until Duquesne ejected her. Finally administrators terminated Vojtko, saying she was not “effective” despite her popularity among students. After calling Kovalik and pleading with him to intercede for her, she walked out onto her front lawn and died of a heart attack.

While Vojtko’s case is extreme, on UC campuses the NAWD demonstrators had plenty to say about low salaries and insecure jobs. At UCLA graduate student workers were enthusiastic supporters. “They’re going to end up in these uncertain jobs and they know it,” says Goetz Wolff, president of UC-AFT Local 1990 and a UCLA lecturer in urban planning. “Half of the credits in basic classes here are taught by lecturers. The national action was very important, because students are unaware of the distinction between lecturers and ladder faculty. They just see us as teachers. Now they’re waking up to our conditions, and how they are affected.”

Wolff calls it “adjunctification — the neoliberal process by which the university shifts risk to employees, and increases their vulnerability.” He warns tenured faculty that they, too, are in the crosshairs of politicians and administrators seeking to end tenure completely. “Unless they get moving, they will lose big time.”

“Change will only come if we get organized and speak for ourselves.”


Rallies at three of San Diego community college campuses highlighted the same problem for community “Our most significant problem is our unequal pay,” explains Ian Duckles, a parttimer who also teaches in another district to earn enough to survive. The state Education Code limits adjuncts to 57 percent time or less, virtually mandating a freeway flyer existence. “A lot of our work is essentially unpaid — serving on committees, working on curriculum development, participating in shared governance,” he adds. “And for teaching the same class, with the same credential, we get much less than full-timers.”

To increase the visibility of part-timers, the AFT Guild produced buttons with the scarlet letter: “A is for ADJUNCT.” The union collected 800 signatures on letters to the governor, telling him to include money for equity pay and paid office hours in his budget.

The union also brought Joe Berry to speak at two of the San Diego rallies. Berry, a retired labor educator from the San Francisco Community College Federation of Teachers, is the author of Reclaiming the Ivory Tower, now virtually required reading for adjunct activists.

Berry, who estimates that the contingent sector of higher education in the United States now includes over a million people, emphasizes that the NAWD protests demonstrate a groundswell among educators. “Change will only come if we get organized and speak for ourselves,” he says, pointing to the organizations created by the adjunct movement — the New Faculty Majority, the Coalition of Contingent Academic Labor, and others.

Berry believes that defending part-timer rights is intertwined with protecting the community college system itself, and cites City College of San Francisco as evidence. “We have the best contract for adjuncts in the country, with 80 percent pro rata and a commitment to reach 100 percent, substantial job security, and a real preference in hiring for full-time positions,” he says. “This gives us a vision of what’s possible.”

He emphasizes that NAWD actions at hundreds of campuses demonstrate a growing movement. “People are ready to talk about nationally coordinated actions now. It must have been like this in the movement for the 8-hour day, or when we got unemployment insurance in the 30s.”