The March for California’s Future: We walked the valley with a message of hope and justice A capsule summary: 365 miles, 48 days, rallying from town to town 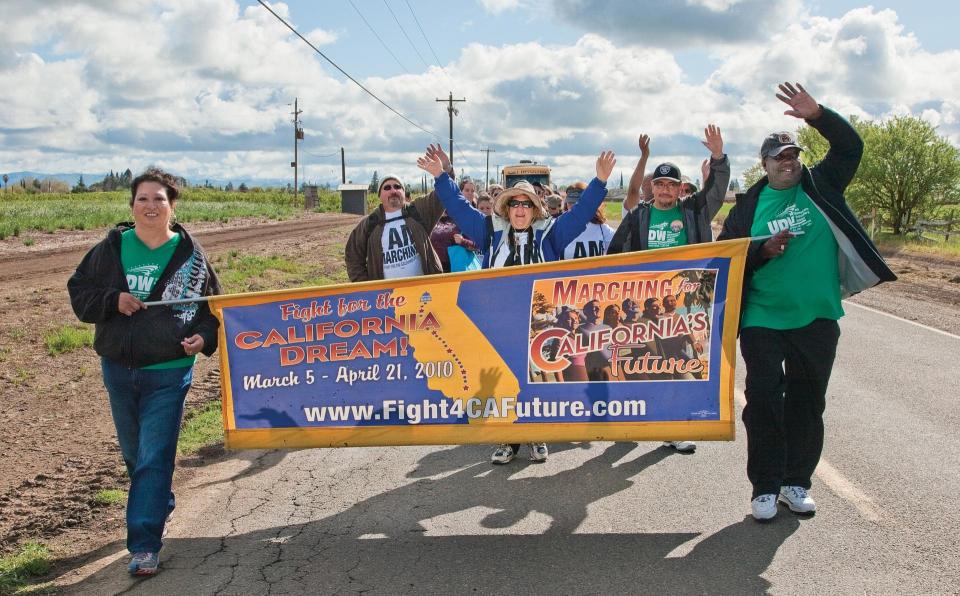 In the CFT-organized March for California’s Future, six “core marchers” walked 365 miles from Bakersfield to Sacramento over the course of 48 days. Putting their lives on hold, they braved the elements, sleeping in churches, schools, and RV parks.

Throughout California’s great Central Valley — home to people who work the fields as well as legislators elected in small towns who demand budget cuts and oppose tax increases — the marchers talked to people and listened to personal stories of economic hardship.

Thousands of CFT members and others joined the marchers for an afternoon, a day, a week, a spring break. Supporters showed up at rallies and town hall meetings. Along the way, marchers asked people to sign petitions for the CFT-sponsored Majority Vote ballot initiative to remove the requirement that two-thirds of the Legislature approve a state budget. The following are snapshots of the historic march.

AT THE LAUNCH of the march in Los Angeles on March 5, Gavin Riley, the oldest of the marchers, was worried he might not be able to walk the distance. Supporting the goals of the march to restore public education and public services was easy, being away from his wife for seven weeks difficult. 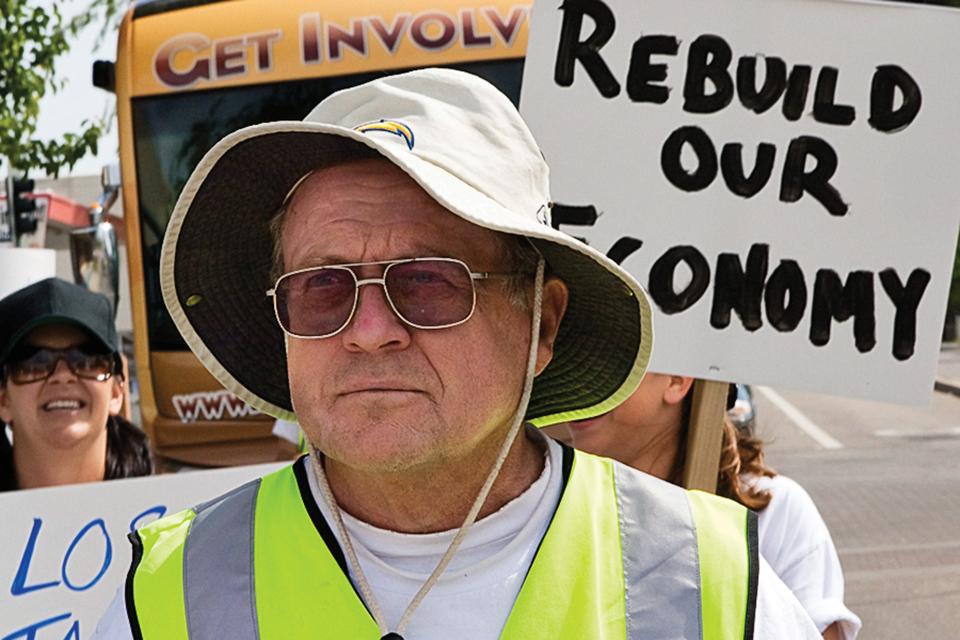 Riley retired from 37 years in the ABC Unified School District, in the southernmost part of Los Angeles County. “I view myself as a legacy of the California system when it worked,” he remembers. “I went to school in the 1950s when our school system ranked as one of the best in the nation. College was free at the state university system.”

Riley says that back then policymakers believed if we had an educated electorate, it would be more productive, more supportive of the state. “I think that worked,” he says. “They gave me a free education, and I came back and worked my entire life in the state. I’ve owned businesses here. I’ve taught in our schools. I think I’ve more than returned the investment.

“But we’ve kind of lost track of that. At one time we were a selfless society in California. We seem to have become more selfish. That’s unfortunate, because we’re losing track of the dream.”

As for the distance? Forty-eight days later Riley strode into Sacramento with ease.

JIM MILLER teaches labor studies at San Diego City College. His wife, Kelly Mayhew, also an instructor there, took over part of his teaching load, and full responsibilities for their six-year-old son. “She was very emotional when I left,” Miller recalls. “That part of it’s hard. It’s probably not the best time in my life to choose to walk 365 miles. But really in the big picture, it’s a small sacrifice in comparison to what’s at stake. 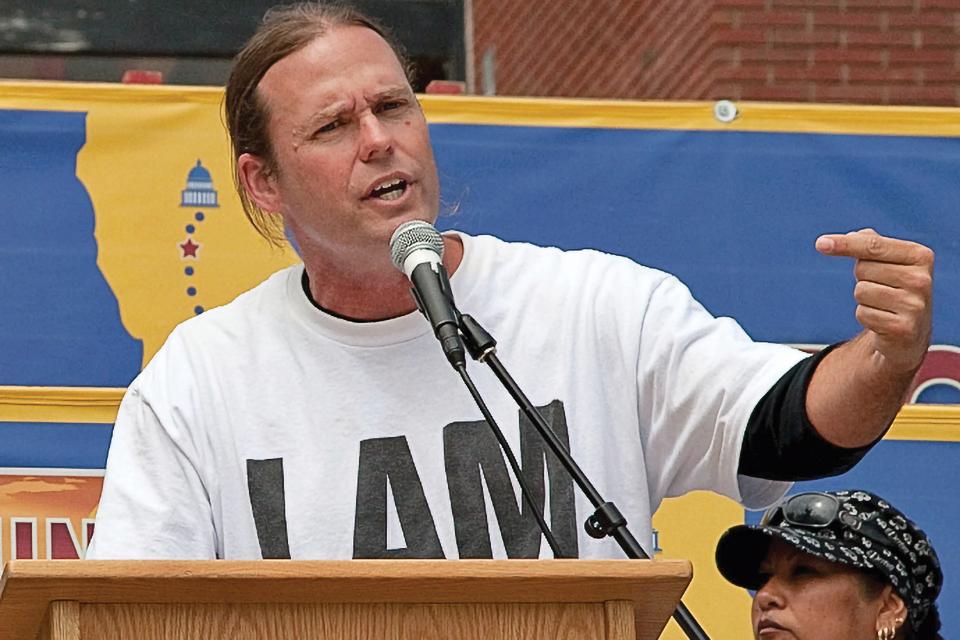 “I’m not just marching so that my son, the son of two community college professors, can have fewer kids in his class. If we don’t do something in some of the areas where we’re marching, communities where the average income is as low as $5000 a year, if we don’t do something for the children of those workers, then we’re going to have to build more prisons, because there’s going to be no future for them. 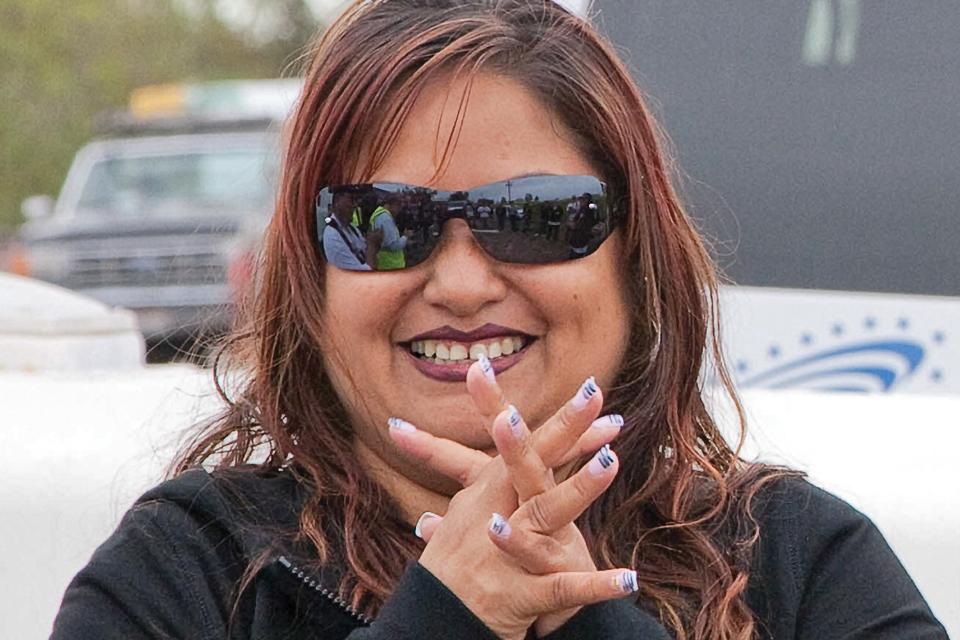 “We want to save the entire social contract in the state,” he explains.  “What’s inspiring people is that different unions, different communities are talking to each other in this shared struggle.”

Irene Gonzalez joined the march not as a teacher, but as a worker in the criminal justice system, and a leader in her union, the American Federation of State, County and Municipal Employees.

“In the probation department in Los Angeles, where I work, we service the community in rehabilitating minors and adults, and a lot of our services are being cut too,” she explains. “We used to give referrals and provide help in getting jobs or developing reading skills. But with the cuts we can’t do that any longer.”

Gonzalez predicts a social explosion if the state’s priorities aren’t changed. “It’s time for us to start standing up and fighting back.”

Unite with all who would join a people’s march

THE DEMANDS of the march go beyond saving education, to fighting for an economy and a government that works for everybody, says Jim Miller. “We’re not saying save education by throwing old people out of their home care, by getting rid of health care for poor kids, by closing down state parks or privatizing prisons.”

Moore credits the CFT for organizing the march, “for taking a bold step and then reaching out and saying, ‘we need other people.’ If they hadn’t taken that step, we’d all probably be working the same way we always have, in our silos. And what you see on the march here is, no silos. This isn’t just about public education; it’s about public services and a fair tax system. As long as we stick to that, this coalition will continue to grow. It’s a people’s march.”

FOR ONE MARCHER, Jenn Laskin, the Central Valley communities remind her of Watsonville, where she teaches humanities and English, and food justice in the school garden, at Renaissance Continuation High School. 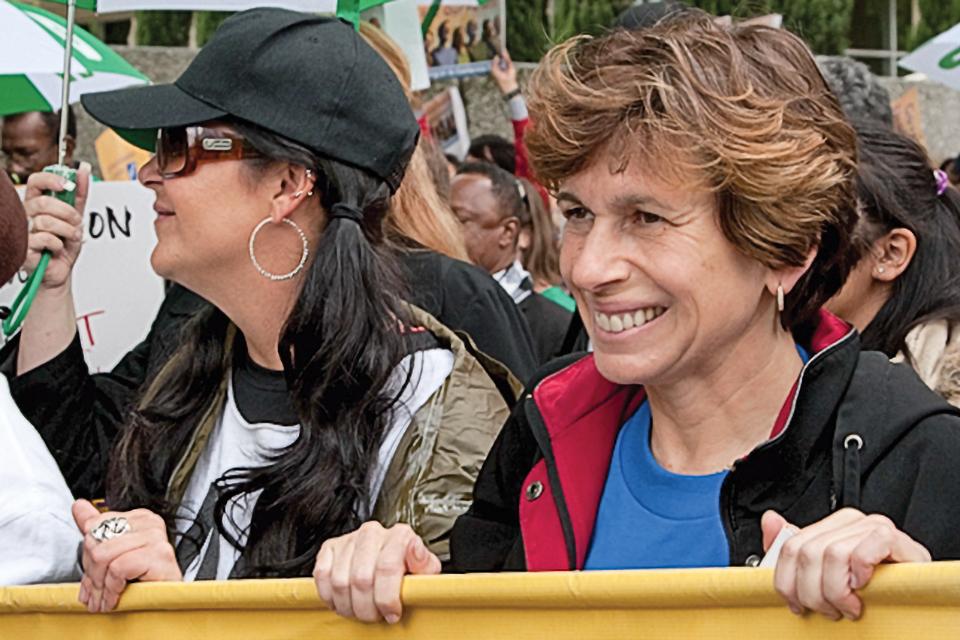 “Watsonville has a 27 percent unemployment rate,” she says. “I have many students with both parents out of work, who grow food in our garden to bring home to their families. You can really feel their poverty and desperation.” 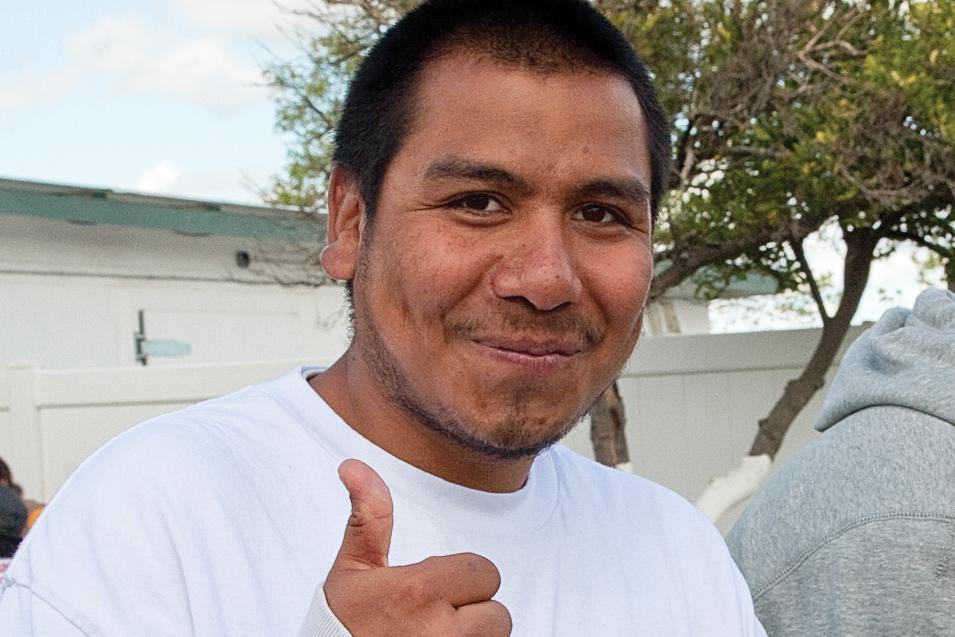 Valley denizens responded positively to the march, Laskin says. “A woman stopped one day with oranges and papayas in her truck and gave us fruit, invited us to her home for chile rellenos. Another woman followed us for three days, bringing water. That’s why I think it was right to choose the Central Valley to have this march.” 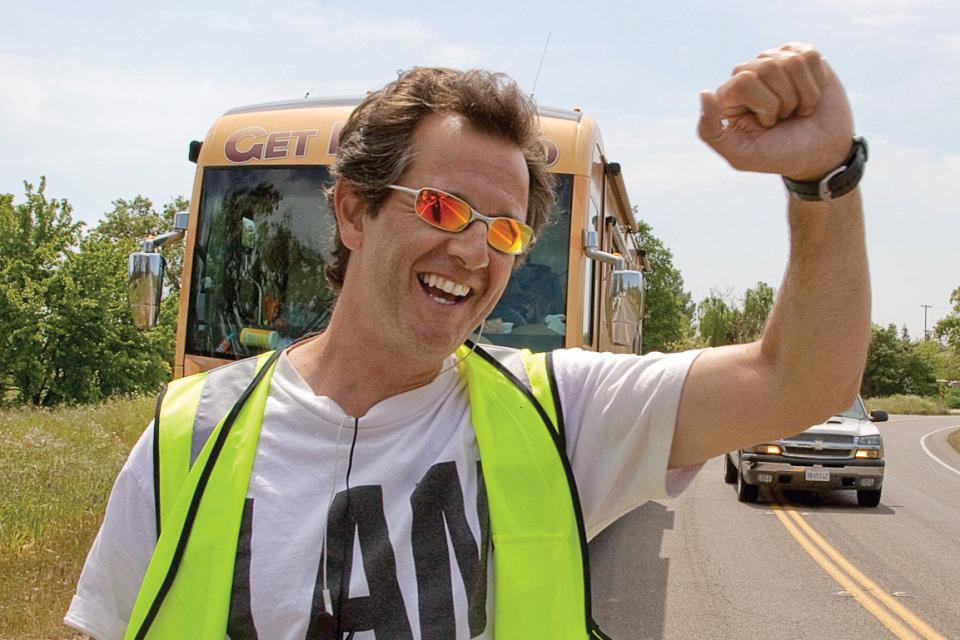 By the time marchers arrived in the northern delta region, they had passed by one source of California’s budgetary woes – prisons. Chowchilla is the site of two prisons: One with a $125 million budget and the other a $153 million. To the south, Corcoran’s two prisons have $270 million and $230 million budgets.

Despite the jobs in the two facilities, Corcoran has much higher unemployment than the state’s average – 19 percent. The prison budgets dwarf those of schools or city services. The budget for schools last year was $29 million – a twentieth of the budgets of the two penitentiaries. Yet for all the promise of jobs, the prisons don’t help much to alleviate joblessness in rural California.

Unlock economic recovery with the key of public education

JENN LASKIN says Watsonville now has seven school nurses for 19,000 students, and has cut school psychologists and counselors, music and art. “Sports have become pay to play,” she says, “which means that talented students who don’t have the money lose the opportunity. That cuts off yet another pathway to college.”

Next year K-12 classes will have 28 students.  “We’re loading to the max. Kindergarten classes are super crowded, and one student told me, ‘we can’t even fit on the rug anymore.’”

In the San Joaquin Valley Laskin talked with many teachers who have received pink slips. “I spoke with one teacher who worked three jobs to put herself through school. She’s in her second year, which means she will have no due process rights in layoffs until the first day of next year. So she’s being laid off this year. Her family’s lived in McFarland for five generations, and her father has been a custodian for the district there for 23 years. Without a job there won’t be anything to keep her in the community where she grew up. The closest place to look for work is Bakersfield, where they just issued 200 pink slips, and many highly qualified teachers are fighting for the same job.”

Jim Miller says the community colleges are serving more than 200,000 students they don’t receive funding for and scores of part-time instructors have been laid off.

“My job is to serve our students and I’m unable to do this. Community colleges are the most accessible door of opportunity for working class students and communities of color in California. We’re witnessing the destruction of the California dream in regard to education. It’s a race to the bottom in every way.” 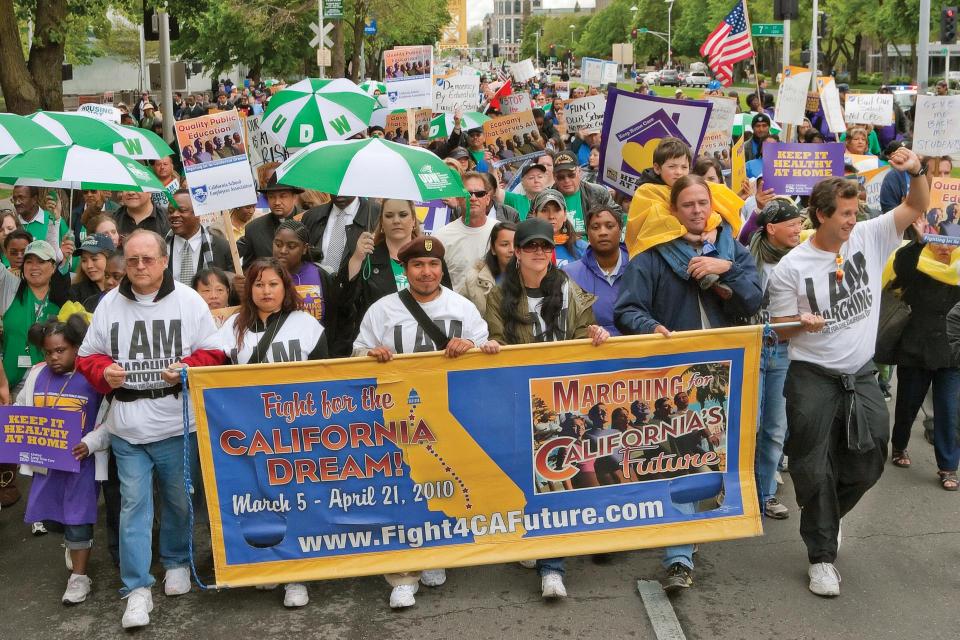 Join those who evolve from apathy to hope

JIM MILLER is proud of the impact the events of the march had on his students. “They’re educating themselves. They have a remarkable understanding of what’s going on. It’s inspiring to see how sharp they’ve become on arcane matters, like split roll tax and oil extraction tax. I think that’s a hopeful sign.”

That hope was borne out in the final mile to the state Capitol on April 21, when the six marchers were joined by nearly 10,000 supporters: school and college employees, students of all ages, parents, home healthcare workers and their patients, social and mental health workers, police officers, firefighters, probation officers, members of the clergy, and community activists. AFT President Randi Weingarten made the trip from Washington D.C. to support the march and call for restoration of public services in California.

As he walked up the Central Valley to Sacramento, David Lyell, the substitute teacher from Los Angeles, talked with other teachers on the way. “They told us they’d gotten into education because they wanted to make a difference in the lives of children, but that with the budget cuts, they’re not able to do it,” he recalls.

Lyell once considered himself an apathetic person. “I know there’s a lot of apathy out there, and I used to be apathetic myself,” he said. “But I believe now we can make a difference by organizing and working together. This is an amazing opportunity.”