Legislators of the Year: Lorena Gonzalez Fletcher and Connie Leyva

“She’s been our friend, strong ally and go-to person,” Mahler said when introducing Fletcher, one of the women to win this year’s Legislator of the Year Award. 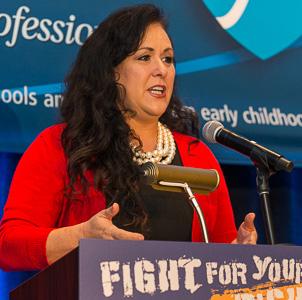 Gonzalez Fletcher began her speech by noting it was the 107th anniversary of the Triangle Shirtwaist Fire, where 146 garment workers died from fire, smoke inhalation or jumping to their deaths since owners had locked the doors to stop workers from taking breaks. These deaths, which sparked laws to protect workers’ safety, were caused by corporate greed Gonzalez Fletcher said, and though we may not be locking garment workers inside factories, we still need to guard against corporations putting profits above workers’ rights.

“The work you do today is no less important than it was 100 years ago,” she said. “We need to fight back against corporate interests and for every worker who has lost their life or livelihood.”

CFT President Joshua Pechthalt introduced state Senator Connie Leyva (D-Chino), the other winner of the award. Pechthalt has a personal connection to Leyva – their daughters both play college softball – and when he has an issue related to labor, he texts her, and she always gets back to him, he said. 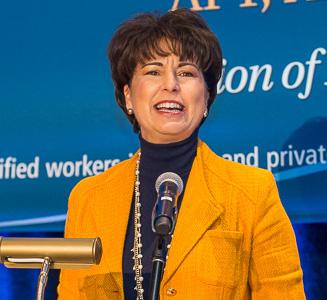 “There’s no better place to be on a Sunday morning than in a house of labor,” Leyva told the attendees. “I love stirring it up a little bit.”

Leyva said she wants to be the legislator who negotiates for defined benefit pensions and contracts, and that she cares about the issues CFT members care about. She mentioned how inspired she is by the students of Marjory Stoneman Douglas High School, who have been advocating for gun control after a mass shooting at their school.

“I appreciate all of you and what you do educating the young people who are going to change the world that we screwed up,” she said.