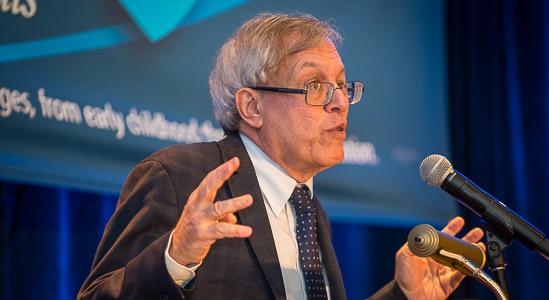 If you get a case on the Supreme Court, make your brief a shameless attempt to pander to Justice Anthony Kennedy, said UC Berkeley Law Dean Erwin Chemerinsky, keynote speaker at the CFT Convention. Why? Because Kennedy has been in the majority 97 percent of cases this year, and 98 percent the year before.

Chemerinsky brought up how the Senate, in an unprecedented move, refused to even hold hearings on Merrick Garland, the man President Obama nominated to the Supreme Court in 2016 after Justice Antonin Scalia died. Chemerinsky said Garland was a year ahead of him in law school, a brilliant man and a decent person.

Donald Trump appointed Neil Gorsuch, a conservative justice to the court, meaning there’s a 5-4 conservative majority, the same way there was with Scalia. Gorsuch was 46 years old when he was appointed, Chemerinsky pointed out, meaning he could potentially be on the bench until 2058. This is bad for labor, he said, particularly concerning Janus v. AFSCME, which would mean unions could no longer collect “fair share” fees from non-members who benefit from the union’s bargaining activities. A similar case, Friedrichs v. California Teachers Association, went to the court in 2016. Chemerinsky said he read the transcript of the case and it was ever clearer to him what the outcome would be. After Scalia’s death, it resulted in a 4-4 split decision.

“The outcome of Janus rests on a single person – Neil Gorsuch,” Chemerinsky said. “He didn’t say a word at the oral arguments. I’m not a betting person, but I would wager all the dollars and pennies in my savings account that Gorsuch will join together with the conservative members of the court.”

This is just the first of many blows to public employees, Chemerinsky said, along with challenges to the National Labor Relations Board and the threat of gerrymandering, when a district is divided up so as to favor a political party.

“We all learned in civics class that voters are supposed to choose politicians,” he said. “But they’re choosing us.”

Chemerinsky also brought up Masterpiece Cakeshop v. Colorado Civil Rights Commission, about a baker who declined to make a wedding cake for a same sex couple on religious grounds.

Chemerinsky cracked a joke, asking “Did Colorado get it right when it argued bakers can’t be choosers?” and then spoke about the serious implications of the case.

He realized he was painting a bleak, depressing picture, the dean said near the end of his speech, and added he was more afraid for the country and what he believes in than any other time during his life. But he told Convention delegates what he tells his students.