The latest in a string of ballot measures claiming to limit special interest money in politics will appear on the November ballot. This is yet another attempt to deceive voters into passing a law that benefits wealthy corporate interests at the expense of workers and unions. It is nothing but a corporate power grab, the kind California voters have already rejected twice first in 1998 and again in 2005.

This measure would limit the ability of local unions to help elect education-friendly school board members and college trustees, and limit the CFT’s ability to participate in candidate campaigns and ballot measures such as the Millionaires Tax.

CFT has joined forces with a statewide coalition of unions fighting to defeat this measure, one that the Long Beach Press Telegram called “…a phony veneer of fairness…one-sided and biased.” Yet the measure’s proponents have positioned the “Stop Special Interest Money Now Act” as a “simple, fair and balanced solution.”

Proponents claim the measure bans contributions to candidates by both unions and corporations, prohibits both from collecting political funds from members and employees through voluntary payroll deduction, and makes all member or employee political contributions by any other means strictly voluntary, requiring annual written consent.

A closer examination, however, reveals a giant loophole that allows corporations to continue to make unlimited political expenditures supporting or opposing candidates, without restrictions, and unlimited contributions to ballot measures. 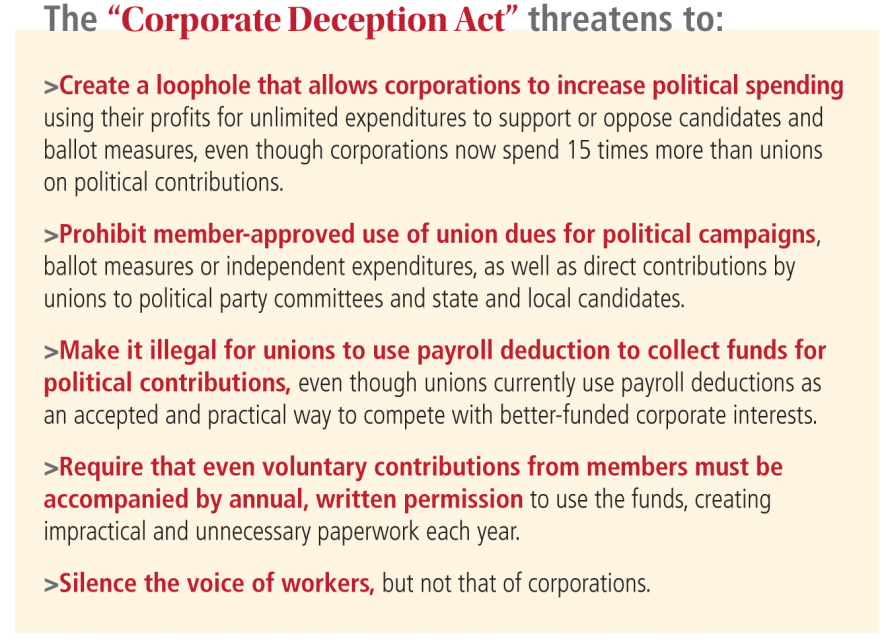 According to the Sacramento Bee, the measure is the brainchild of Orange County conservatives, is being bankrolled by wealthy conservatives, and was written by a partner in the law firm that represents the California Republican Party. Other financial supporters are millionaires associated with the extreme rightwing Lincoln Club of Orange County.

Newport Beach attorney Michael Capaldi, one of the main proponents of the measure, told the Bee he adheres to a libertarian philosophy and opposes regulation and government interference. Yet the website of Capaldi’s law firm makes note of his clout: “As an opinion leader and chairman emeritus of the Lincoln Club of Orange County, he has had a major influence in Orange County, Sacramento, and Washington, D.C.”

Anti-worker extremists, including the Beltway’s no-tax ideologue Grover Norquist, have sponsored similar measures in dozens of states in the past. Their stated agenda is to diminish worker rights, abolish organized labor, and privatize public education. They have tried passing similar measures twice before in California. Voters soundly rejected the measures both times.

If this measure were to pass, it would effectively silence the voices of working people while giving corporations free rein to influence the political system. The measure’s loophole would allow corporations to spend without any limits using a web of shadowy front groups, big business associations, and corporate super PACs.

Unions would see their political funds dry up and the voice of workers fall silent in the public debate, while corporate interests would continue to spend unlimited money from unnamed sources to conduct the new one-sided “debate.” Corporations would take control of the initiative process in California, placing their self-serving measures on the ballot, and spending millions to convince voters to support them, while labor organizations would be unable to fight back.

— By CFT and Coalition Staff