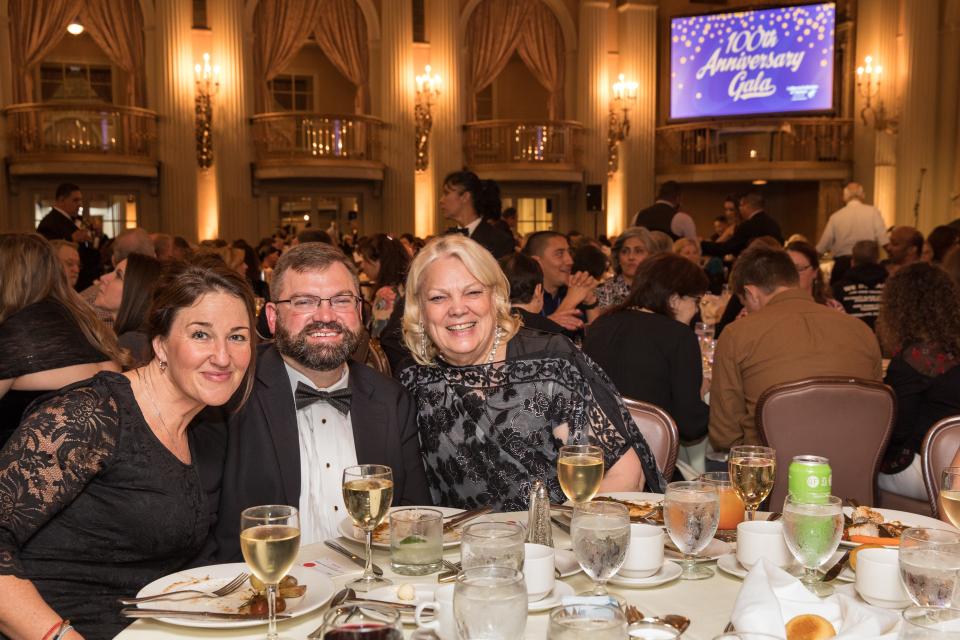 Hundreds of delegates to the CFT Convention celebrated the 100th Anniversary of their union at a hotel of nearly the same age, the historic Millennium Biltmore in downtown Los Angeles.

During general sessions, delegates watched a series of videos chronicling the CFT’s history of activism. Outside the ballroom doors, they could view a wide range of exhibits in the CFT Hall of History.

People could read The Professional Creed crafted at the formative meeting of the statewide union on May 31, 1919, when eight fledgling AFT local unions met in San Francisco to form the CSFT – the California State Federation of Teachers. Copies of the Federation’s once-lost AFT charter – signed by Samuel Gompers, president of the AFL-CIO, in 1919 were posted on the walls for people to see up close. A snapshot history of CFT was told in a curated set of the union’s 70-year-old publication, California Teacher. 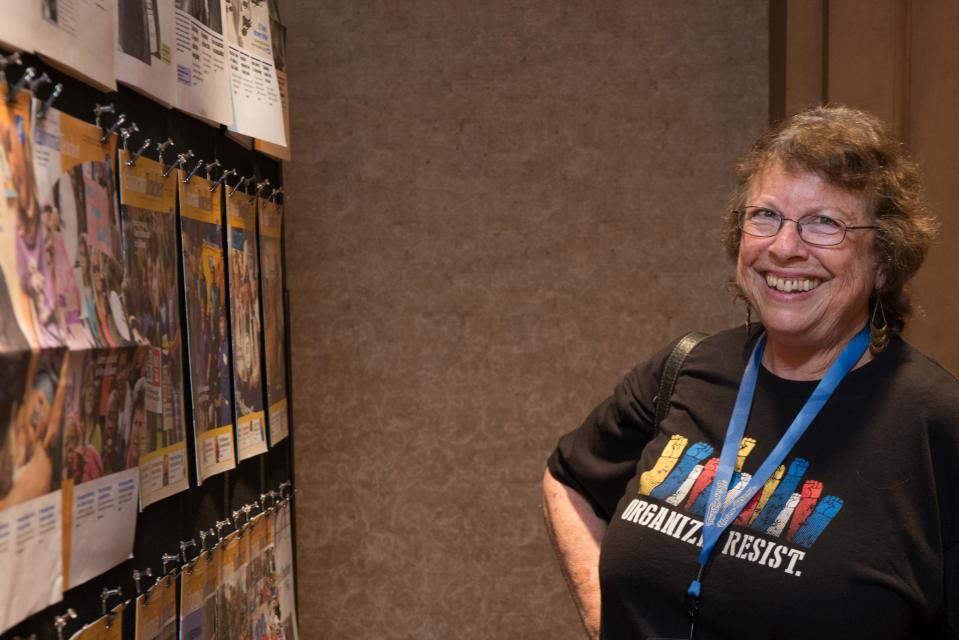 On Saturday evening, the Federation hosted a 100th Anniversary Gala. The Biltmore’s magnificent Crystal Ballroom, with its majestic balconies and hand-painted 30-foot ceiling, was the early home for the Academy Award ceremonies, hosting eight of them in the 1930s and the early 40s. 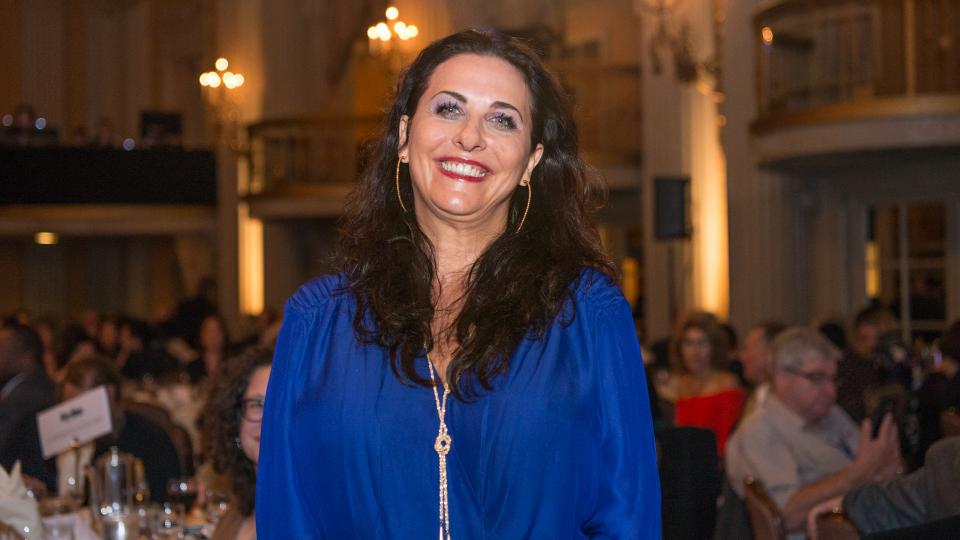 At the CFT’s gala, a current Oscar winner joined the ghosts of Oscars past floating in the room – member Melissa Berton, who teaches high school English at CFT-represented Oakwood School, a private school in Los Angeles.

Berton produced “Period. End of Sentence.,” a film about the extraordinary way the women in an Indian village have empowered their lives. It won this year’s Academy Award for best short documentary. 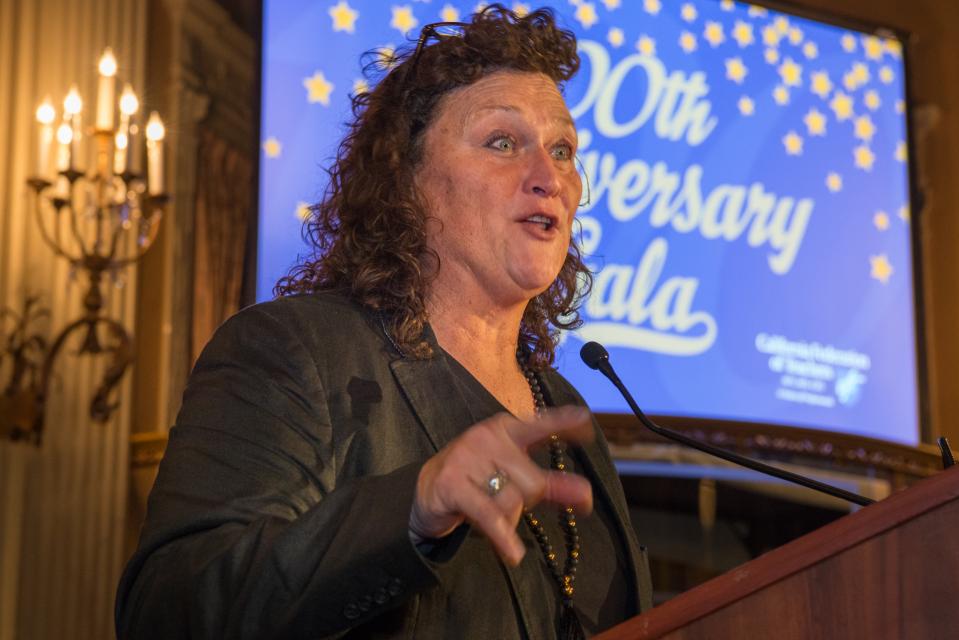 In another Hollywood twist, the master of ceremonies for the event was Dot-Marie Jones, who has appeared in movies such as Patch Adams and TV shows including Married with Children and Glee.

AFT President Randi Weingarten also attended the gala to acknowledge the 100th anniversary of the CFT, calling it one of the most activist unions in the country. Just three years ago, the AFT celebrated the centennial of its founding in 1916. Only three years later, the CFT was the first state federation chartered by the AFT. 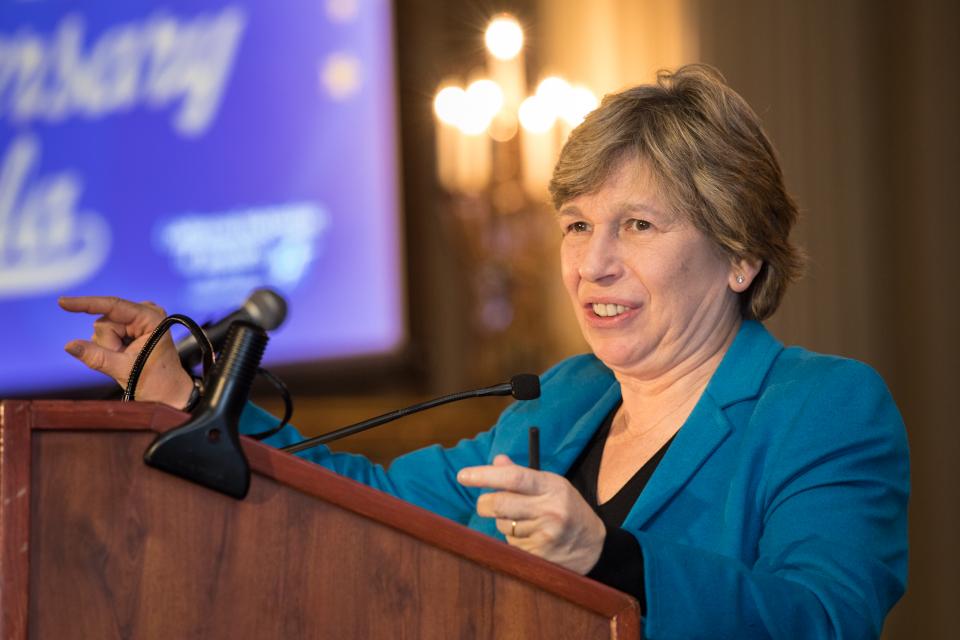 Weingarten noted that 1919 was the year women got the vote, which the CFT (then the CSFT) championed, and that women educators were responsible for March being declared Women’s History Month. Weingarten asked former CFT Presidents Mary Bergan and Marty Hittelman to stand, along with all the presidents of the locals.

She also talked about the need for celebrations like this. “There are times to party hard and to laugh,” she said. “Joy is an act of resistance.”

In that spirit, state politicians – both live and on video – honored the CFT for everything it’s achieved in the last 100 years. Betty Yee, the state controller, who attended the gala, said she’s happy to be in a state where diversity is strength. Her parents immigrated from China, and she didn’t speak English until she went to kindergarten. Yee credits public education for enabling her to rise to her present position.

Richard Lara, the state’s insurance commissioner, also said (by video) he’s where he is because of public school teachers. Gov. Gavin Newsom and former two-time governor Jerry Brown, were in videos congratulating the CFT on consistently fighting for students and educators. In his first stint as governor, Brown signed the historic 1975 CFT bill that brought collective bargaining to teachers and classified employees. State legislators Kevin McCarty and Phil Ting also offered centennial greetings. 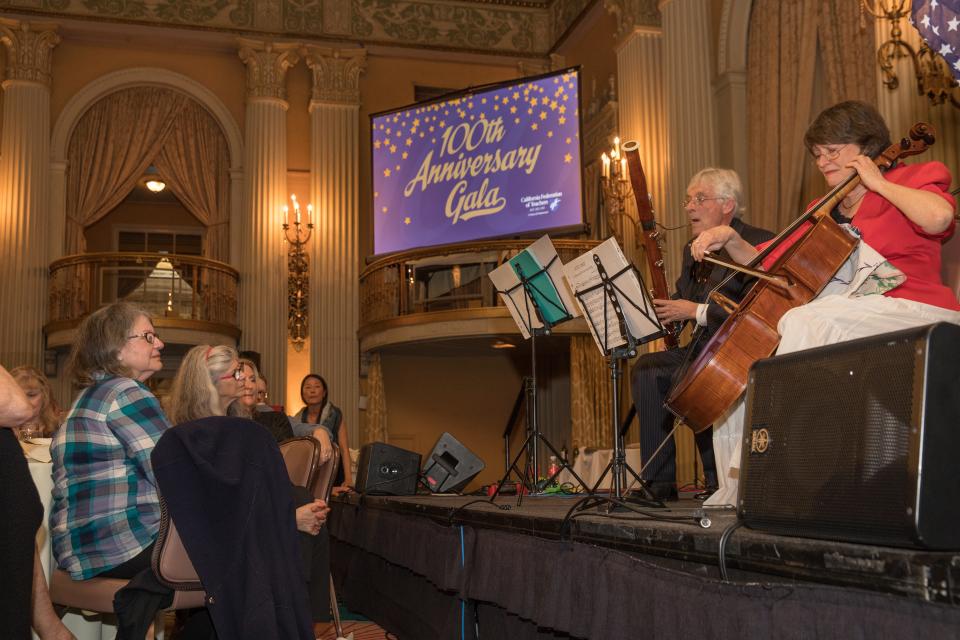 The gala featured a special guest – Rebecca Rust, the daughter of El Cerrito teacher and former CFT President Ben Rust – a classical musician who lives in Germany and plays all over the world. Rust, a cellist, and her husband Friedrich Edelmann, a bassoonist, performed three movements in the stunning ballroom that was certainly built for such a performance.

Rust said a few words about her father, the CFT president from 1951to 1958, who fought for collective bargaining and is best known for respecting teaching as a craft. Membership doubled under his leadership.

The CFT’s highest honor – the Ben Rust Award – created in her father’s memory, was given to outgoing CFT President Josh Pechthalt, who led the CFT for the past eight years and will be retiring. He was recognized for his bold leadership in crafting the Millionaires Tax, which voters ultimately passed as Proposition 30. His abiding sense of humor did not go unnoticed. He joked he could repeat his entire State of the Union address for those who hadn’t heard it.

Throughout the evening, the San Diego protest band The Resizters, performed, and after dinner people went to the dance floor where a DJ played tunes to keep the 100-year celebration going. Guests decked out in gala attire danced into the night.

New CFT history is made

Delegates to the 100th Anniversary Convention elected the first classified member to hold a top leadership position in the CFT, Council of Classified Employees President Luukia Smith, as Secretary Treasurer. The man who has held that position, Jeff Freitas, was elected CFT’s new president. In another historic first, both Freitas and Smith are proud members of the LGBTQ community.

In yet another historic action, delegates passed a resolution to rebrand the California Federation of Teachers as CFT: A Union of Educators and Classified Professionals. The change formally recognizes that the union proudly represents a broad spectrum of education workers.

The new leaders will take office on May 24, one week before the Federation’s actual 100th birthday on May 31. So, with the changing of the guard, the venerable yet vital CFT will begin its next 100 years.

— By Emily Wilson and Jane Hundertmark