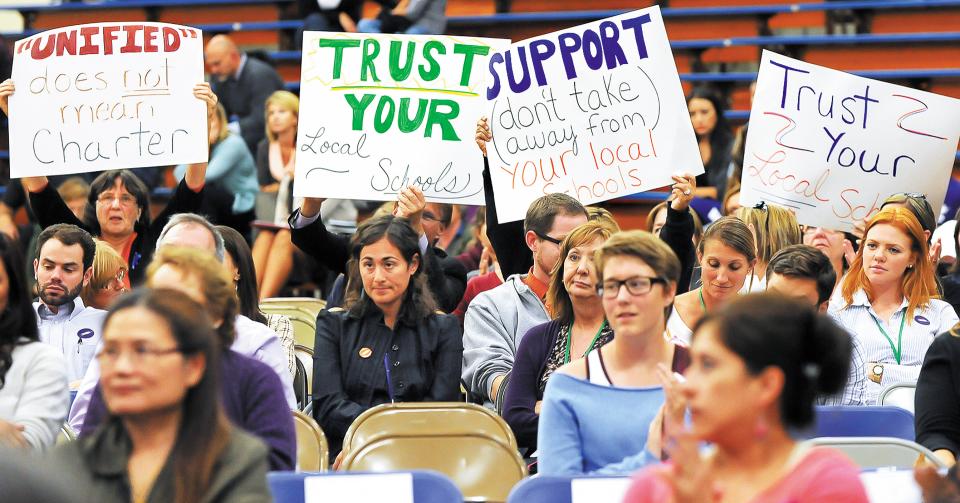 Gemma Abels, the president of the Morgan Hill Federation of Teachers, saw how for-profit charter schools hurt the children and families in her district in Santa Clara County. A school there, Flex Academy, operated by the largest for-profit charter company – K12 Inc. – closed just a few weeks before school started, leaving families scrambling to find places for their children.

“K12 Inc. is actually traded on Wall Street – it’s more than just an online school – they sell their own curriculum to the school from another part of the company,” she said. “If it’s not making a profit, and it’s not worth it to them, they just shut it down.”

This sends a message nationally that we don’t want public money going to for-profit entities and taking money from children.

Abels felt strongly enough to testify before the State Assembly in support of a bill banning for-profit charters. On September 7, Gov. Jerry Brown, a supporter of charter schools and who started two of them when he was mayor of Oakland, signed the bill, AB 406.

While doing research into Educational Management Organizations or EMOs, the corporations that manage for-profit charters, Rapp found all sorts of ways these companies lack transparency and accountability. K12 Inc. has received over $310 million of taxpayer money over the last dozen years, with an estimated revenue of $872 million in 2016. The company estimated its profit at $89 million that year and paid its top six executives millions of dollars in compensation while its average teacher salary was $36,000. The average graduation rate for the California schools operated by K12 Inc. is approximately 40 percent compared to the state graduation rate of 83 percent.

In Michigan, the home state of U.S. Secretary of Education Betsy DeVos, whose husband was an early investor in K12 Inc., 80 percent of the charter schools are operated by EMOs and studies have found they perform poorly. In Ohio, the attorney general sued an online EMO for $80 million for doing things like inflating attendance.

To move the bill through the Legislature, the CFT had to lay out the case of how for-profits hurt children and to define what it meant to operate a school. That was a tricky part, says Assemblymember Kevin McCarty, who authored the bill along with Assemblymember Tony Thurmond, the CFT-endorsed candidate for State Superintendent of Public Instruction. McCarty, a Democrat from Sacramento, was named a CFT Legislator of the Year in 2017.

“I’m a big supporter of public education and these for-profit charters were just abusing the system and scamming taxpayers and hurting students,” McCarty said. “There was an exposé that uncovered K12 Inc. was doing things like enrolling students for one minute a day and getting credit for a whole day of ADA and making a ton of money for a publicly traded entity. With those things we knew it was an issue we needed to keep banging away at.”

This is a good first step in not allowing free rein of profiteering folks to damage an already struggling system. — Rico Tamayo

Rico Tamayo, president of the EC/TK-12 Council, is pleased about the new law – and he’d like to see more done to hold charters accountable.

“You can’t just swoop in and when things don’t go well swoop out, like Trump University or something,” he said. “This is a good first step in not allowing free rein of profiteering folks to damage an already struggling system.”

Tamayo pointed out that 25 new charters have just opened in Los Angeles.

“They get to do just about whatever they want and accept the populations they want,” he said. “They’re draining money from public schools, and they don’t have to follow the same rules — it’s just not fair.”

Morgan Hill’s Abels thinks – and hopes – that passing AB 406 means people are starting to realize the damage the proliferation of charters can do to public education. Tamayo says he also felt hopeful after the last meeting of the State Board of Education when board members voted down a new charter school.

“Usually the teachers say no and the parents say no and even the local school board says no, and they still vote them in,” Tamayo added. “Hopefully the tide is turning and our for-profit charter ban can help lead the way.”

> Read the ground-breaking bill yourself!