Making schools community hubs is key to the union’s campaign for quality public education, CFT President Joshua Pechthalt told participants at the Leadership Conference. Connections with community members comprise the CFT’s greatest strength and he encouraged educators to mine those ties.

Pechthalt said that he first met one of that morning’s panelists, Christina Livingston, the executive director of Alliance of Californians for Community Empowerment, when his local worked with ACCE to close a metal plating plant across from an elementary school in South Los Angeles, which was causing respiratory problems in the kids and cancer in the teachers. After years of organizing, the plant was removed and the soil was cleaned. Showing that teachers and staff care about students and their families makes a big difference, Pechthalt said. 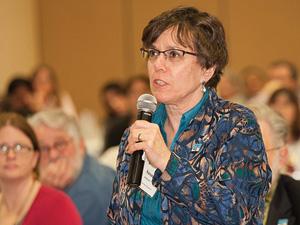 We need to move away from numbers and statistics and test scores to real stories of people. That’s how you move people — when it’s connected to a face, and they feel compelled to change.

“Our relationships with our community partners is about more than what happens in school. Then when we start to talk about issues like seniority, the parents have some confidence in us,” Pechthalt said.

“This attack on us is 30 years in the making,” Pechthalt said. “We’re not going to turn it around in a couple of months. But this is the antidote to these powerful forces fighting against us. They have more money and more access to media, but they don’t have our connections to parents and students.”

Livingston, who was on the Quality Public Education panel at the Oakland Marriott with Steven Pitts, a senior policy analyst with the UC Berkeley Labor Center, also encouraged union locals to build relationships with parents. 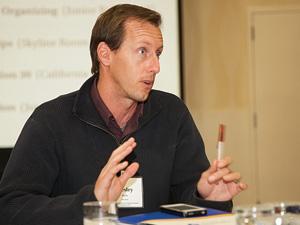 “School sites are instrumental in the community. Parents and teachers have the same goals — they’re natural allies,” Livingston said. “Folks who want to dismantle public education would love to see us divided.

“We need to move away from numbers and statistics and test scores to real stories of people,” she said. “That’s how you move people — when it’s connected to a face, and they feel compelled to change.”

Pitts, too, emphasized the importance of building alliances. Talking about the need for good jobs, Pitts said education alone is not a silver bullet. “We need to go beyond trying to fix a person and try to fix structures,” he said. 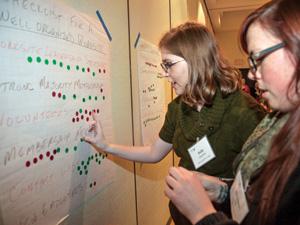 After the panel, conference participants broke into three groups —
classified employees, K-12 and higher education — to come up with what they thought a quality public education system should look like. Teachers and staff discussed how work should be evaluated, what types of services students should have and what teachers need to be effective.

We need your energy and ideas. We need a compelling vision of quality education that we can build a campaign around.
— Josh Pechthalt, CFT President

In the classified group, accountability, more training and respect among colleagues, students, teachers and parents came up again and again.

Getting input from faculty, students and community when making decisions at the school was also something Barbara Hanfling, the executive director of the San Jose/Evergreen Faculty Association, had as one of the top ideas from her group. Hanfling’s group discussed how students learn best when they have a vibrant and diverse curriculum.

In the K-12 group, Britt Dowdy, a middle school science and math teacher from the Newport-Mesa Federation of Teachers, said his group discussed the importance of an interconnected curriculum that goes beyond testing. Other ideas were appropriate support for teachers and professional development.

Implementing all these ideas won’t be easy, Pechthalt told the group, but the CFT is used to setting ambitious goals. He reminded participants of the March for California’s Future, the 48-day trek from Bakersfield to Sacramento that led to Proposition 25, which reduced the legislative vote margin on the state budget from two-thirds to a simple majority, and last November’s Millionaire’s Tax, which proposed raising taxes on the wealthiest two percent to fund schools and essential services. Many in the labor movement told the CFT both were mistakes.

Pechthalt asked everyone to keep thinking big with this campaign. “We need your energy and ideas,” he said. “We need a compelling vision of quality education that we can build a campaign around.”