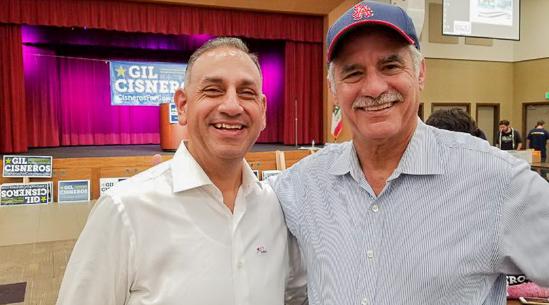 Even nationally, while Democrats lost close races like Beto O’Rourke in Texas, Andrew Gillum in Florida and Stacey Abrams in Georgia, they demonstrated that candidates with progressive messages could seriously challenge seemingly entrenched Republicans in red states.

These states, along with our own Orange County and other examples from across the country, demonstrate that a progressive message not only excites the base but speaks to the concerns of independents as well. In 2020, Democratic presidential candidates who provide progressive solutions to jobs, healthcare, and climate change may even peel away voters from Trump.

In spite of the fact that Democrats seem to have a lock on power in California and while the Republican Party is fading into irrelevancy, the organized charter school movement threatens the very nature of public education.

In the same way that Trump excites the Republican base, we need to be equally as bold. Frankly, that should have been a primary lesson from our Millionaires Tax experience. It’s exactly the reason Bernie resonated with progressives.

It doesn’t mean we call for nationalizing all industries, but it does mean that calling for single payer healthcare and putting Americans to work rebuilding our crumbling infrastructure, a la the New Deal, are the kind of bold initiatives we need. One thing is for sure, if Democrats can do no better than trot out corporate-tinged candidates with tired and measured bromides, we may vote for them but they are sure to excite no one.

Another important takeaway is that women are flexing their political muscles, running for office and being elected as never before. In 2020, we are going to continue to see women elected to local, statewide and national offices. A progressive woman on the presidential ticket should be a must.

In spite of the fact that Democrats seem to have a lock on power in California and while the Republican Party is fading into irrelevancy, the organized charter school movement threatens the very nature of public education.

The good news is that the Charter School Association failed to win any statewide office despite spending tens of millions of dollars. In the Primary Election, charter school advocate and former Los Angeles Mayor Antonio Villaraigosa was badly beaten, and in the General Election, Marshall Tuck failed in his second bid to be elected state superintendent of public instruction.

The Charter School Association, including billionaire contributors Eli Broad, Netflix’s Reed Hastings, the Waltons and others outspent Tony Thurmond by a 3-1 margin in the most expensive superintendent’s race in U.S. history and yet they went down to defeat. That’s the good news.

The bad news is that charter school money has been successful at electing local school board members and state legislators.

The challenge for us as we go forward is to better explain how the organized charter school movement not only threatens existing in-district schools but the very nature of public education. Key to that success is more effectively engaging labor and community groups.

While expanding a Democratic majority is a good thing, reaffirming and strengthening public education and taking on the charter school movement are imperative if we are to create the society we envision for our children and grandchildren.