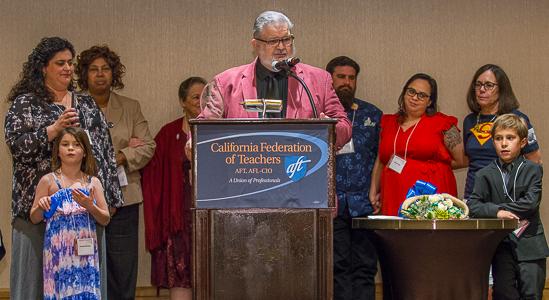 United Educators of San Francisco Executive Vice President Susan Solomon started her speech at the Ben Rust Award luncheon by talking about some of the things that were happening 50 years ago – the Vietnam War dragging on and Martin Luther King getting assassinated while supporting striking garbage workers.

Solomon said she was doing what Dennis Kelly, the recipient of this year’s Ben Rust Award, the union’s highest honor, often did – giving some political or literary context. The reason Solomon focused on the number 50? It was that many years ago when Kelly, former AFT and CFT Vice President and former president of United Educators of San Francisco, joined the CFT, half of the union’s life.

“Fifty years is a long time to do anything,” Solomon said. “And for all of those years Dennis has been a union activist, an advocate and a true union brother and leader.”

In 1971, Kelly and UESF’s first president, Joan-Marie Shelley, were sworn in on the San Francisco Labor Council, which Solomon said “must have been a hell of a year for the Labor Council.” She noted some of the many awards and accolades Kelly and his wife Hene had won over the years, including the Labor Council’s Man and Woman of the Year.

Kelly has done so much for the union, Solomon said, such as creating the political director position and increasing respect for paraeducators. Since he has been involved, UESF has been on an upward trajectory of improved salaries and benefits, Solomon said. She also called him a strict boss.

“In the office he would not allow us to have more than three coffee cups on our desk,” she said. “When the cupboard was bare, he made it his mission to walk around and collect dirty coffee cups.”

Asking people who worked with Kelly to describe him, Solomon said they used words like “forceful,” “principled,” “knowledgeable,” “articulate,” “loyal,” and “supportive.”

Kelly introduced his family and UESF colleagues at his table, saying he was the 46th person to get the Ben Rust Award and that “in these times, it’s important to remember that something comes after 45” in reference to Donald Trump, the 45th president.

Reminding people that there’s no such thing as a friendly amendment, Kelly, the CFT parliamentarian for 33 years, talked about some things that happened at past CFT Conventions, such as a local president slugging a staff representative and being barricaded in their rooms in Fresno while people pounded on the door, trying to influence the vote. He asked his wife, Hene, to come up on stage, and kept bringing family members, including his triplet grandkids, and UESF members onstage with him until they surrounded him.

Kelly went over some history of the CFT, telling people about Joseph Perry Utter, who was inspired by Margaret Healy organizing the women teachers in Chicago to form the first local of the American Federation of Teachers. Utter got a charter and formed an AFT local in Vallejo, the first in California.

J.P. Utter organized 56 out of 57 teachers and principals, and they got the tax rate in the town raised to what the teachers thought it should be to support the schools. This inspired other teachers’ unions to form around the state, Kelly said, including his own, AFT Local 61. Then in 1919, Utter organized the leaders of the six locals in California, and they did what no one else in the country had considered. They formed the first AFT statewide federation, the California State Federation of Teachers.

Kelly also talked about Ben Rust. When teachers were being told they were professionals and didn’t need a union, Rust preached the message that teaching was work, and that teachers did need a union. That was something important to hear, Kelly said.

Utter and Rust did all this before collective bargaining or mandatory dues, Kelly said, adding that the next Utters and Rusts were in the room, ready to lead the way during a tough time for unions. Kelly said that he didn’t like the image of standing on the shoulders of giants, but preferred the idea of trailblazers, lighting the way. He mentioned that his family had been indentured servants, shackled to their jobs, and that unions are the way out for workers.

“I am honored to be among you, torchbearers and candle carriers, all,” he said. “Thank you all for the light you have shed and the paths you have illuminated.”