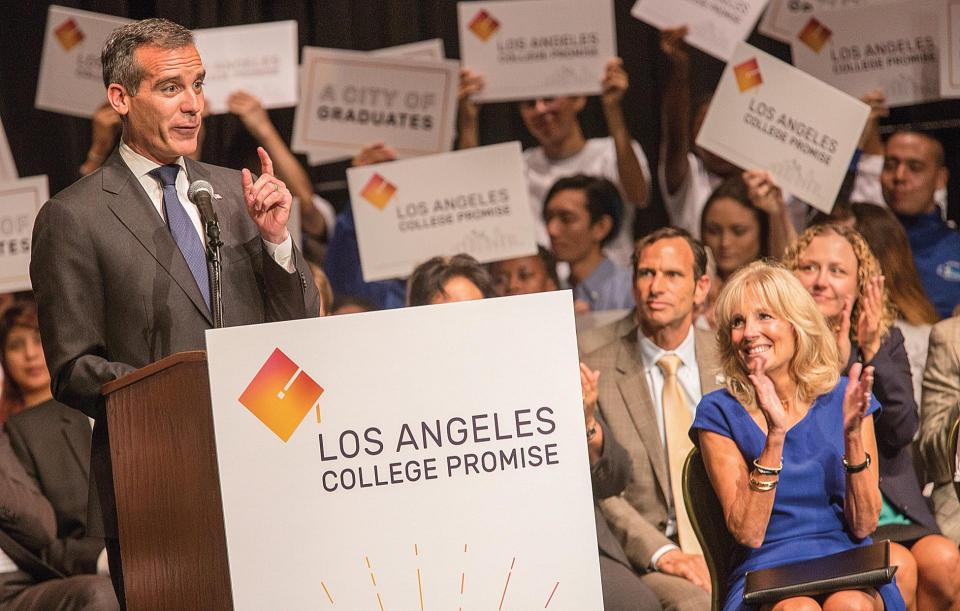 No state has moved as aggressively as California. At least 20 programs throwing open community college doors were introduced in 2016, raising the state’s total to about 30.

In February, the San Diego Community College District announced it would waive course fees for 200 students as part of a pilot program at Mesa, City, and Miramar Colleges this fall. The program covers unit fees and provides up to $1,000 for books and supplies.

The San Diego students must carry at least 12 units in both semesters, maintain a 2.0 grade point average, and contribute eight hours of community service. To help students succeed, they are assigned to “First Year Experience” counselors.

Student Services Assistant Tavaris Ray Franklin, said, “The process of ‘onboarding’ to a college is hard for anyone, but the one-on-one relationship helps smooth the path.”

The district hopes to triple the number of Promise students by spring semester. At the City College Outreach Office, Tavaris and other student services staff are busy organizing workshops at local high schools to help seniors fill out Promise applications and find answers to questions about financial aid and other enrollment issues.

“This is about more than just tuition,” Garcetti said. “This is about books and transportation and discounts on our buses and our rail lines. This is about making sure there’s counseling and support.”

The L.A. College Promise is expected to cost $3 million the first year. More than 11,000 of the 30,000 graduates from Los Angeles Unified in 2015 went on to attend one of the nine campuses in the college district.

To date, the only stated eligibility requirements are that the student be a graduate of a city high school or designated charter school, and carry at least 12 units at a city college.

L.A’s Promise is scheduled to start next fall, but the head of the College Staff Guild, Velma J. Butler, says there has been no discussion about changes in staffing or training to meet an expected surge in enrollment.

Butler wants the college district to study lessons other districts have learned about hiring, training, and budgeting. Based on the launch of other Promise programs, her concerns may be realistic.

When the State of Oregon budgeted $10 million to cover 10,000 students at its 17 community colleges this academic year, more than 12,000 students applied. Although the state still charges $50 a term, officials predict the Oregon Promise will boost enrollment by 25 percent.

“I feel like we’ve been playing catch-up from the beginning,” said Roberto Suarez, the Promise coordinator at Portland City College. He said part of the problem was inevitable, learning the regulations as they were being rewritten.

Financial aid staff have been coping with new rules and requirements for reporting and awarding aid that are continually evolving.

Academic advisors are going through the biggest shift in daily work methods. Suarez said the college has adopted an “intentional advising” model of counseling. Instead of the “drop in” model, every Promise student meets regularly with a designated advisor, who reviews their progress.

The Promise program has increased funding to cover the need for more skilled advisors, although, Suarez added, “Because of our size, it has been difficult to implement the program across the system. However, the new opportunities for students make it worth the extra effort.”