Free City! The story of CFT’s epic campaign against the ACCJC BOOK REVIEW 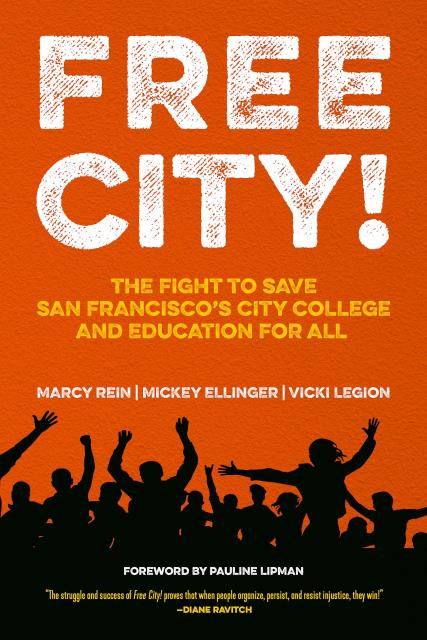 Free City! The Fight for San Francisco’s City College and Education for All
By Marcy Rein, Mickey Ellinger and Vicki Legion
PM Press, 2021

Early in 2017, as City College of San Francisco’s five-year fight for its life drew to a close, I was attempting to convince a reporter from the Chronicle of Higher Education to write a summing up story. He said, “Someday someone really needs to write a book on all this.”

Four years later, someone has, and it was worth the wait. The authors of Free City! — Marcy Rein, Mickey Ellinger and Vicki Legion — have taken an extraordinarily complex array of events, issues, institutions and personalities and fashioned a highly readable narrative, posting the stories of students, faculty and their fight to save their college against a big picture political background. Most importantly, the book memorializes how the faculty union, the San Francisco Community College District Federation of Teachers, AFT Local 2121, backed by the CFT, organized and won its lengthy war against a rogue accreditation agency.

CFT members who have been around for a while know the broad outlines here; the struggle to save CCSF’s accreditation and the school itself was covered extensively by the union’s publications and discussed in all our meetings between 2012 and 2016 — not to mention that it became a central feature of the statewide union’s activism. But Free City! is more than the story itself. Authors Rein, Ellinger and Legion have constructed a case study of the neoliberal assault on public higher education. Beneath their microscope, we get a dissection of the nearly successful attempt by the Accrediting Commission for Community and Junior Colleges to shutter a premiere gateway to a better life for working class students of color, and a cogent analysis of the reasons why. 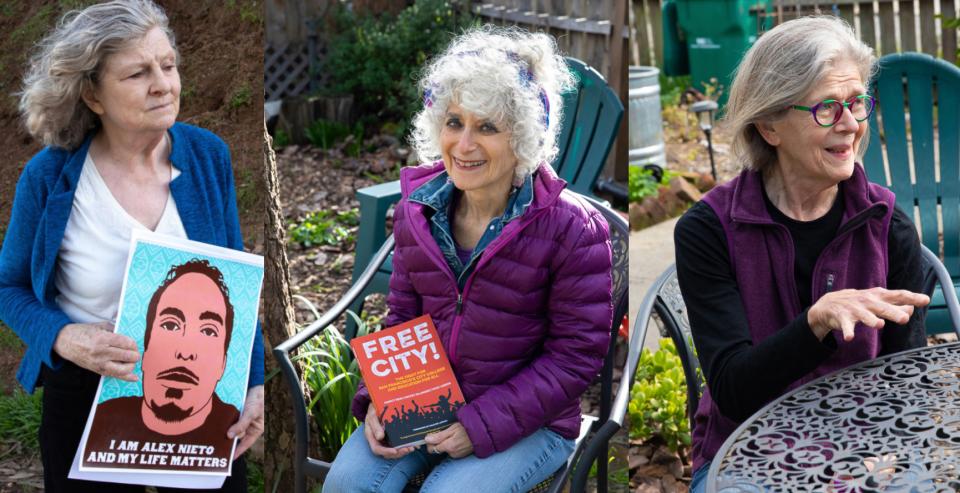 That’s because from their examination of this specific instance, the lens widens out to demonstrate the terrible impact of several decades of austerity policies on California’s schools and the communities they are meant to serve. Free City! shines a light on the social forces that, behind the scenes, funded and designed the strategy carried out by the ACCJC, notably the Gates and Lumina foundations.

There are heroes here: AFT Local 2121 leaders like Alisa Messer and Tim Killikelly, as well as scores of other faculty members who refused to roll over as the administration capitulated time and again to ACCJC’s demands. Marty Hittelman, CFT’s first president from the ranks of community college faculty, who had consistently called out the ACCJC for years before their attack on CCSF, and Joshua Pechthalt, the next CFT president, who made the struggle one of the statewide union’s top priorities. Students like Shanell Williams, Otto Pippinger and Win-Mon Kyi who engaged in direct action, faced off against police violence, and traveled to Washington, D.C. to testify in front of the National Advisory Committee on Institutional Quality and Integrity. Politicians like San Francisco Supervisor Jane Kim, City Attorney Dennis Herrera, Assemblymember Rob Bonta and Congresswoman Jackie Speier.

There are plenty of villains as well: ACCJC leaders like Barbara Beno, Steven Kinsella, and their enablers in the CCSF administration, state chancellor’s office, and on the California Community College Board of Governors.

But what emerges most clearly from Free City! is what it takes to win a struggle with stakes as high as this one — organization, resources, and enough people determined to save what they loved from forces hell bent on destroying it. The book’s authors interviewed nearly 100 people, and this represents but the tip of an iceberg consisting of thousands of people involved at one point or another in the defense of CCSF. (Full disclosure: I was an interviewee, and know two of the three authors.)

This was a battle with national implications. Unfolding at the same time as large chunks of the corporate-owned, for-profit higher education world were imploding, leaving untold numbers of students holding large debts and nontransferable course credits, the CCSF struggle posed a stark question: Would the end result be a vastly shrunken college, with a mission pared down to transfer functions — as the ACCJC and its neoliberal backers demanded — or would a viable alternative to corporate-run disasters like Heald College continue to exist?

Thus the fight to save CCSF also posed a larger question: Which way forward for California’s community colleges? California’s two-year system enrolled the nation’s biggest post-secondary student population. As CCSF went, so would the rest of the 71 districts. And potentially right behind that question loomed another: Whither higher education in America?

The occasional error and misinterpretation mar Free City!, like a footnote that erroneously asserts that Prop 98 guarantees the community colleges 11% of the state budget. Or when, in describing City Attorney Herrera’s lawsuit, the authors mention but do not sufficiently highlight the enormous role played by CFT’s attorney Bob Bezemek and the union’s complaint against ACCJC filed with the U.S. Department of Education in building Herrera’s suit.

But these are minor defects within an important achievement. Free City! should be read by anyone interested in the future of public higher education, and in the strategies and tactics required to maintain taxpayer-supported services against the well-resourced forces of privatization.

One chapter heading, “How can we keep winning and still be losing?” hinted both at the many fronts on which this fight occurred, and at the unseen damage inflicted by the ACCJC on the emotional well-being of the thousands of students, faculty and community supporters of the college over time — a toll that challenged the perseverance necessary to win.

But if one lesson stands out, underscored by example and spelled out clearly in the book, it’s the importance of staying in the fight. Because only that makes it possible to win.


Fred Glass retired from the position of CFT Communications Director and is a long-time labor studies instructor at City College of San Francisco. He is also author of the book, From Mission to Microchip: A History of the California Labor Movement.