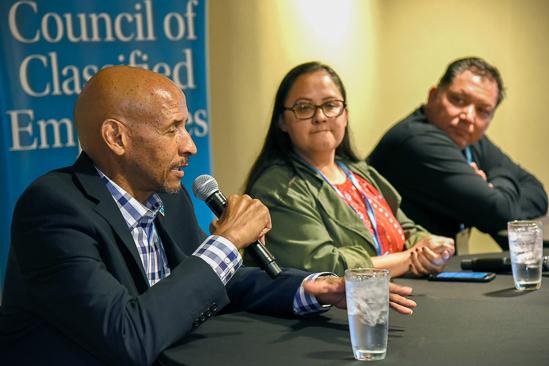 About 100 members of CFT’s Council of Classified Employees recently met in Anaheim for three days of training and networking.

The buzz in hallways and workshops was about Gov. Jerry Brown signing AB 670 less than a week earlier. The new law makes part-time playground supervisors part of the classified service.

“This is our opportunity to organize ‘noon dutys,’” said Carl Williams, the CCE vice president for Southern California and leader of the Lawndale Federation of Classified Employees.

Williams expects principals to try firing noon dutys they don’t like before the bill goes into effect on New Year’s Day. “We have to watch out for their well-being.”

Williams moderated a panel discussion with three classified leaders who have built their locals by organizing, reaching out, and building relationships.

During the five years Thomas Hamilton has led AFT Local 6108, the Long Beach Council of Classified Employees has aggressively developed personal relationships with members of its personnel commission and school board.

“We believe the old saying that if you aren’t at the table, you’re probably on the menu. We sit at every table possible,” Hamilton said. Sharing our views over coffee or lunch with district leaders is more effective than two minutes at a microphone in a meeting, he said.

Anabel Ibañez is the new political director of AFT Local 61, United Educators of San Francisco. Ibañez is the first classified UESF member to hold the position. Community organizing is a key component of the local’s political work, she said.

“We recognize the richness and power of coalitions,” Ibañez said, “That explains how we elected our full school board slate last November. Our families trust us, and that trust extends to the community.”

“A lot of people don’t understand what we do,” Lopez said. “Getting out and talking really helps.”

The keynote speaker, state Sen. Josh Newman, was elected last year in an ultra-close Orange County race. His 0.6 percent margin of victory gave Democrats a two-thirds majority in the upper house, and Republicans are trying to recall Newman, ostensibly because he recently voted to increase the state gasoline tax.

“I’m happy to stand with unions in the fight against the charter school industry,” Newman said. “It’s the right side.”