Accrediting commission sticks foot in mouth, then jams it in farther House Minority Leader Nancy Pelosi is furious with the ACCJC 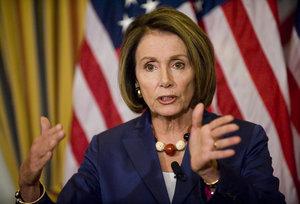 May 29, 2014—In recent weeks the Accrediting Commission for Community and Junior College (ACCJC) leadership has claimed in a number of public settings that City College of San Francisco can withdraw its own accreditation and reapply for “candidacy status” and keep its federal and state funding, including student financial aid. It has also claimed repeatedly that it has no authority to give the college more time to address accreditation issues, and the commission’s July 2014 closure order for the college will stand.

Neither claim is true.

Nancy Pelosi and a growing crew of members of Congress, the San Francisco Board of Supervisors, and the state Assembly understand that these things are important. They also understand U.S. Department of Education rules for accreditation, which state clearly that an accrediting body like ACCJC may extend the time a college has to work on accreditation issues if warranted by changing circumstances.

The ACCJC understands none of these things, and is hell-bent on closing City College, drawing the following rebuke from House Minority Leader Pelosi in a press release dated May 27, 2014: “It is outrageous that the ACCJC continues with its incorrect interpretation of Department of Education policy, even in the face of a clear, unambiguous statement from the department that clearly confirms that the ACCJC has the legal flexibility to offer a good-cause extension.”

Pelosi goes on to say, “The commission’s letter raises serious questions about its ability to properly execute the law and make informed decisions based in ensuring high-quality institutions of learning that benefit our students, our community and our state. Should this failure of leadership persist, new leadership is needed at ACCJC. The Department of Education should also consider whether to recertify ACCJC as an accrediting body.”

Bay Area Congresswoman Jackie Speier put the matter even more bluntly in a statement to the San Francisco Chronicle: “They’re a rogue operation,” Speier told the Chronicle. “They have dug in their heels like some totalitarian regime. I think the time has come for the secretary of education to dismantle them.”