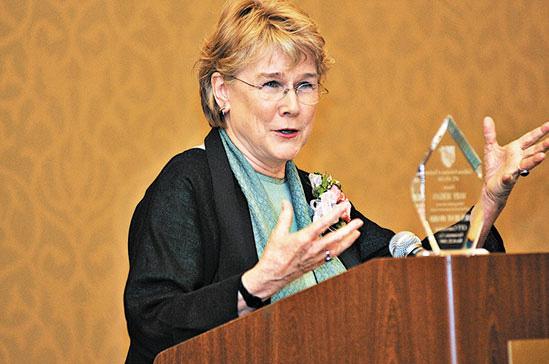 Mary Bergan left Wisconsin for the good life in California and ended up giving all of us more than she could ever dream to receive.

Mary graduated from UC Berkeley in 1965 and then followed the idealism of the Kennedy era and joined the Peace Corps. Mary was assigned to Malaysia and spent two years teaching English language and literature and also coaching the championship relay team at Tunka Kurshiah College, a secondary boarding school for Malay girls.

With that commitment to society in place, Mary turned her attention to acquiring easy wealth and a soft job. So she became a middle school English teacher in Pittsburg, California.

As a new teacher, Mary joined the Pittsburg-Antioch Federation of Teachers, AFT Local 2001. Her sharp mind and keen sense of analysis brought Mary to the attention of CFT President Raoul Teilhet who brought Mary onto staff as CFT’s first full-time Sacramento lobbyist.

Having defined and perfected the role of lobbyist, Mary offered herself as an insurgent candidate for the presidency of the California Federation of Teachers. Her election made Mary Bergan the first woman to serve as president of the union in the modern era that began with Ben Rust.

Mary’s leadership was recognized formally as she won seats on the governing boards of the California Federation of Labor and the American Federation of Teachers. Mary was the first California state president in over 40 years to serve as an AFT Vice President.

The years 1991 to 2007 were a time of challenge, tumult, and change. The steady hand on the tiller of the CFT guided our union through rough waters and kept the union afloat.

Mary’s time in office as president of the California Federation of Teachers was a time of pride and accomplishment for the union and was the product of the integrity, calm leadership, and earned respect of Mary Bergan. We honor those qualities today with our highest honor, the Ben Rust Award.