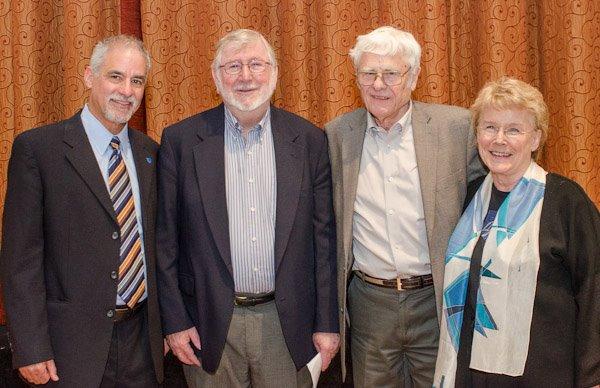 His ethical consistency and steadfast belief in progressive tenets — a multi-generational Hittelman family trait — have served as a moral compass on a wide range of educational issues.

Marty implemented his commitment and dedication to education during his 40 years as a classroom teacher. Having taught mathematics for three years in the Los Angeles Unified School District and for 36 years in the Los Angeles Community College District, he understands students and exhibits a passion for education. He clearly realizes the connection between teachers’ working conditions and students’ learning conditions.

He has demonstrated his commitment to improving those conditions by serving in many key positions. His mathematics acumen served him well as Chair of the District Budget Committee in the Los Angeles college district (where he was known for “opening the books” and increasing transparency with his renowned spreadsheets about “real” district budgets — leading to successfully negotiated salary increases). He also served in several positions in the Academic Senate.

Marty has taken on union leadership positions at all levels — local, state, and national. In the Los Angeles College Faculty Guild, AFT Local 1521, he served as Chapter President at Harbor College, member of the Executive Board and negotiating team, Executive Secretary for Grievances, Executive Secretary-Treasurer, Vice President, and President. In 1983, he was Chief Negotiator of the first contract for the Los Angeles College Staff Guild, Local 1521A, hailed by many as the premiere classified contract in the country. He assisted Part-Time Faculty United at College of the Canyons, Local 6262, with its first contract after a contentious struggle to gain the right to form a union.

CFT has benefitted from Marty’s leadership in many ways — as President of the Community College Council for 16 years, as CFT Senior Vice President for 20 years, and as CFT President from 2007–2011. It was in this latter role that he spearheaded effective union member involvement in the political process, helping to change the political landscape with “The Fight for California’s Future,” culminating in the passage of Proposition 25 in 2010. He was in the forefront of media efforts to argue for the need to increase funding for higher education by changing our current tax structure.

Marty brings a progressive vision to the public discourse on education, becoming an outspoken defender of public education against attacks from those who would corporatize public education. He argues passionately that the measure of quality education should be based on more than test scores, and that the influence of educators on their students’ lives cannot be quantified. He publicly took on California’s regional community college accrediting commission in a series of written exchanges demanding that the agency respect state law regarding subjects of collective bargaining.

On a national level, Marty served on the AFT Higher Education Program and Policy Council, developing positions and programs in contingent labor, shared governance, teacher education, technology, and tenure. He also served as Co-Chair of the AFT State Presidents’ Council.

His commitment and dedication to trade unionism in the broader community has been demonstrated by his service as Vice President of the California Labor Federation from 2007-2011, and as a delegate to the Los Angeles County Federation of Labor for over 20 years.

Marty’s contribution to the labor movement cannot be measured by looking only at the lists of offices held. Marty has had a huge impact as a mentor and role model to countless AFT members who have stepped into leadership roles to continue the legacy of those, who like Ben Rust and Marty Hittelman, lead by example and commitment to their beliefs in justice, education, and human rights.