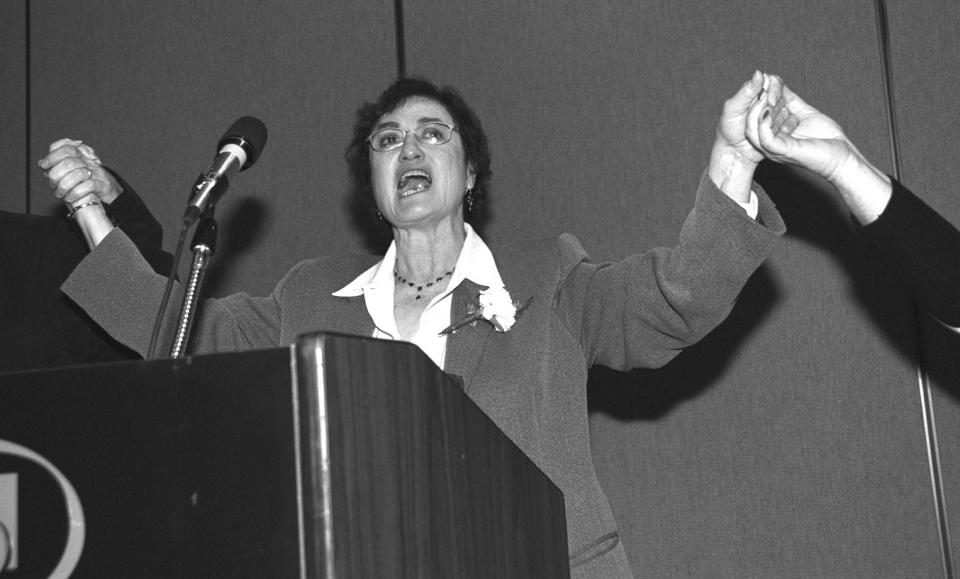 Jacki Fox Ruby, the child of eastern European immigrants, learned early the ideals of American democracy and social justice. As a teenager when the McCarthy hearings filled the family TV screen, she also learned to fear the perversion of those ideals.

Throughout college she supported herself in a succession of clerical jobs.

Jacki began teaching in Richmond, then took a job at Berkeley Unified, first as a substitute, soon in full-time positions at Longfellow and Columbus Elementary Schools.

Jacki loves teaching. During her career in Berkeley she taught elementary and middle school, served as faculty chairperson at her schools and as a member of textbook selection committees for history and mathematics, chaired the mentor teacher selection committee, and for five years was master teacher supervising teacher candidates. In 1977 she was named Outstanding Teacher by Berkeleyans for Academic Excellence.

Jacki joined the Berkeley Federation of Teachers, AFT Local 1078, her first day as a full-time teacher, and soon became active, first as a building representative, then in a string of union offices and activities. She co-edited the BFT newsletter, and in 1974 began her long service on the negotiating team. Inspired by the merger of the AFT and the NEA in New York State, she served on the Committee to Unify the Organizations (BFT and BTA) between 1975 and 1976. But merger was not to be, and she took time off from teaching duties to be staff organizer for BFT’s election campaign under California’s newly-enacted collective bargaining law.

It was a time of political ferment. CFT President Raoul Teilhet said, “I don’t care what people’s politics are, but when they are at the union, the union has to be the agenda.” For Jacki, the union always came first.

After being laid off in 1978, Jacki worked as organizer for United Professors of California, the AFT in the CSU system. She relished the organizing, but was frustrated by a poorly managed campaign and was happy to be able to return to fifth graders at Longfellow — and to the BFT — in the fall of 1979.

Jacki became full-time BFT president in 1992. She was elected a vice president of the California Federation of Teachers in 1991, and held the reins of CFT’s EC/K-12 Council from 1993 to 2003. She represented the CFT before the State Board of Education for ten years.
It should be noted that throughout much of this time Jacki also used her extensive education in psychology as a personal counselor in private practice.

Retirement has not meant an end to activity in education or in the labor movement. She was elected to two terms on the Alameda County Board of Education, and served as an appointed member of the county’s Child Care Planning Commission.

The union put her to work to help organize and then to negotiate the first contract for the South of Market Children’s Center in San Francisco. She has served on the national AFT retirement committee, and was appointed by CFT President Mary Bergan and CLF Executive Secretary-Treasurer Art Pulaski to the first executive board of the California Alliance for Retired Americans.

Jacki Ruby has lived a life true to the spirit of Ben Rust.