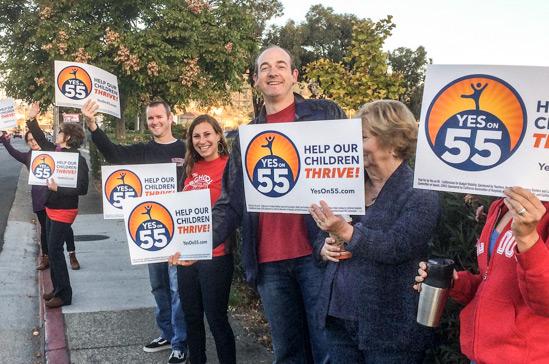 Classified employees and paraprofessionals saw their hours greatly reduced or suffered layoffs. But now, layoff notices have slowed to a trickle.

In community colleges, students are once again able to access thousands of classes slashed during the Great Recession.

In the CSU and UC systems, after years of skyrocketing tuition threatened to place higher education out of reach for working Californians, tuition has been frozen.

All this is thanks to the wisdom of voters who passed Proposition 30 to provide critical revenues when the state faced daunting fiscal challenges.

Prop 30 has worked, says CFT President Josh Pechthalt. “It grew state revenue by billions of dollars a year, with more than 80 percent coming from increased taxes on high-income earners. We led the nation in asking people at the top end to pay a bit more.”

Prop 30 began as the CFT’s Millionaires Tax; it is funded by a modest personal income tax increase on the wealthiest Californians, the only group to see growth in average income over the last quarter century. Individuals who make $250,000 and up, and joint filers who make $500,000 or more, pay an extra 1 to 3 percent. Of the money raised by Prop 30, the top 1 percent of households pay 98.5 percent. Prop 30 also increased sales taxes by a quarter of a cent (after CFT was able to cut this amount in half).

Together, these increases have brought in $6 billion a year for our schools and colleges.

Proposition 55 asks voters to maintain the personal income tax increase for an additional 12 years, generating up to $8 billion a year, according to the Legislative Analyst’s Office. Budget forecasts show that unless voters extend the taxes on the wealthy, California public schools will lose nearly $4 billion in the first year alone.

“We can’t afford to go back,” Pechthalt concludes. “Public education in California is seriously underfunded and we still rank near the bottom of the nation in K-12 per pupil spending, average class size, and the number of nurses, librarians, and counselors per student. While Prop 55 has broad public support, we can’t get complacent.”