Six “Aha! moments” from the Women’s March on Washington 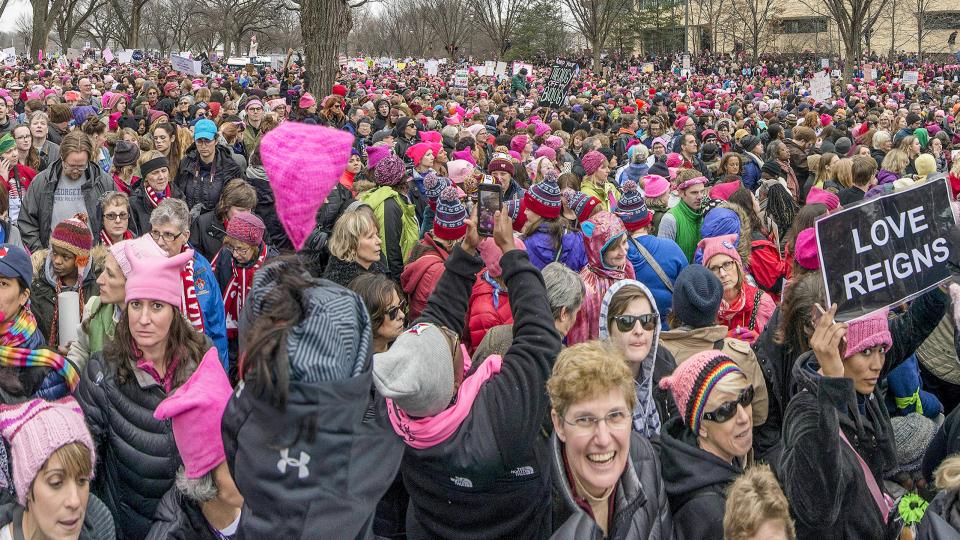 My flight out of SFO was delayed and I nearly missed my connecting flight. But this time it wasn’t just me running from one end of an airport to the other. It was a posse of determined women — many in pink hats with ears — a teenager, a college student, a few of us in that indeterminate age between 40 and 70, including two grandmothers. I ran ahead to make sure they’d hold the flight with one of the grandmothers right behind me. When we got to D.C., the city was teeming with marchers. You didn’t need to see a pink hat with ears to know who we were.

I have a long protest history. I started marching when I was 12, walking picket lines in front of car dealerships in San Francisco. We were marching for civil rights and for jobs. We sang freedom songs like “This Little Light of Mine” and “We Shall Not Be Moved.” I watched my sister get arrested and carried into a paddy wagon. When I was 16, I started a High School Students Against the War group. Later, I helped keep Planned Parenthood open when Operation Rescue tried to keep women from getting in the door, and I came to Washington D.C. in 1989 to march for reproductive rights. But this time was different. I’ll tell you why.

I was in college in the ‘70s. Women were learning to be assertive, to talk back, and to be independent. We took assertiveness training workshops, signed up for karate classes, and learned to change our own tires. We pointed out misogyny and patriarchy wherever we saw it. We were angry a lot. At the Women’s March, I saw women of all ages expressing an assertiveness that came naturally, with an authority they owned and didn’t have to prove. I saw outrage combined with calm determination, fury combined with absolute confidence. I didn’t see the strident attitudes of the ‘70s, when women were trying to be tough. I saw women who are tough.

It was very crowded at the march. We were slammed together, listening to speakers for five hours before the marching even started. Early on I got a taste of claustrophobia and moved to a small rise covered with mud and slippery plants. A constant flow of people circulated around me, everyone trying to find their little space. Throughout all this standing and shifting, we talked to one another kindly. We lent a hand or an arm when it was needed, when someone was unsteady on their feet and would start to slip or fall. Despite the biting cold weather and uncomfortable conditions, I didn’t hear a snitty comment or see an ungracious act. Kindness ruled the day.

The march was a pilgrimage, thousands of us streaming into the capital from different parts of the country. I met a woman doctor from Florida who practices internal medicine in a conservative town and couldn’t tell her patients why she was taking off work. “I just had to come,” she told me. She brought her niece, an elementary school teacher, who’d never protested before. I talked to a trio from Oakland who decided to go at the last minute: a young woman just starting college, new to marching; her grandmother, a veteran protester; and a family friend who leaned across the aisle on the plane and told me, “I had to come. I just had to come.”

4. Recognition of our mutual history

Even though many were new to marching and protesting, we all knew what women had fought for, and we were there to defend it. Women fought to be treated with respect, not as objects of beauty or sexual plunder. Younger women, who had benefited from access to reproductive choice, sex education, and Planned Parenthood, knew older women had struggled for them. When Gloria Steinem spoke, many of us had tears in our eyes. As a foremother, she represented the long hard battle for women’s rights. Women like me, who came up in the 60s, were shoulder to shoulder with women from different eras, and one thing was clear: It was absurd, impossible to imagine going back.

I witnessed deep, unshakable respect for the organizations that have defended, and continue to defend, the rights of women. The ovations for Cecile Richards, the president of Planned Parenthood, and for Ilyse Hogue, president of NARAL Pro Choice America, were as loud and prolonged as the applause for celebrities Ashley Judd, Scarlet Johansson, and Alicia Keyes. When Richards and Hogue spoke, the younger women in the crowd made an immediate connection; they knew these national organizations and their dedication to helping women take control of their own bodies. And for those of us old enough to have mothers and grandmothers who didn’t have strong women’s organizations to protect them, we’d heard about how bad it used to be. Cecile Richards proclaimed to the crowd: “Our doors stay open!” We cheered and clapped, and some of us shed a few more tears.

Something I never bothered to think about deeply — it just felt true. At the Women’s March, it was repeated by nearly every speaker and reflected in every issue that was addressed. Michael Moore spoke about defending public education. Other speakers talked eloquently about the rights of immigrants and refugees, respect for the LGBTQ community, the need to stand up against racism and police killings. One of the most moving parts of the day was when singer Janelle Monae brought to the stage the mothers of African American men who had died at the hands of the police, as well as Sandra Bland’s mother. She introduced each one and had them say the name of their child. Then she led a call and response with all 600,000 of us repeating: “Say his name,” “Say her name.” It was a powerful invocation.

Shortly after I returned home, I planned to make a short presentation to our Board of Trustees. Our local has been organizing a member-driven contract campaign since the district prematurely declared impasse. Faculty have been wearing our AFT 1493 t-shirts on No Take Back Tuesdays for nearly three months, and the union has shown up at every trustee meeting. I wanted to do something we hadn’t done yet; I wanted to tell my story and link it to our top issue — the need to set reasonable limits to our non-teaching workload.

I decided to take a page from Scarlet Johansson, who announced at the march that she was going to be “personal.” She told a story about finding Planned Parenthood in New York, on her own, when she was just 15. The story I decided to tell our board was about a stress-related illness I developed while working as a full-time instructor. I suspected at the time that it was triggered by my heavy non-teaching workload, and it was one of the reasons I retired three years ago.

I went on to connect my story to faculty activism and to all the members who’ve been wearing their AFT shirts on Tuesdays, signing petitions, and showing up at board meetings. I said I wasn’t unique, that others were getting sick, disillusioned and burned out. Talking on such a personal level in that very formal boardroom was a little scary for me. But being at the Women’s March, surrounded by the power of kindness and spurred on by the confidence and strength of so many women, showed me another way to address a union issue — as a human issue.

Katharine Harer is an English teacher, Co-Vice President of the San Mateo Community College Federation of Teachers, AFT Local 1493, and Lead Organizer for her local as part of the CFT Strategic Campaign Initiative.