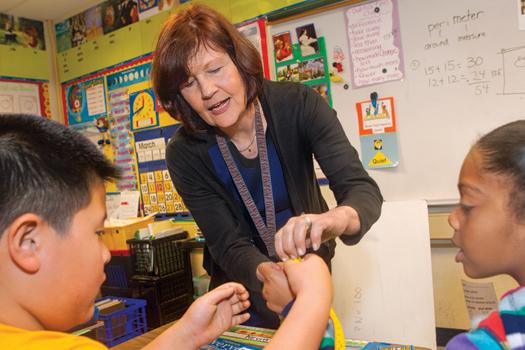 Stephanie Bernstein says her second graders are typical seven-year-olds: “They need to get up and move about every 15 minutes.”

Bernstein, who has taught at M. Pauline Brown School in Daly City for seven years, has 20 English language learners in a class of 23. She plans a lot of hands-on and peer-learning activities to engage students because “they have a hard time sitting still, listening to the teacher talk, and concentrating on lessons.” Yet, each year, Bernstein’s students and second graders throughout California are required to sit for an hour to take the high-stakes Standardized Testing and Reporting, or STAR, test.

Bernstein doubts her students understand what’s being asked. “Young children are still emergent readers and concrete thinkers. The test has a lot of abstract questions that go beyond their levels. They get easily frustrated.”

Bernstein wonders who benefits from giving second graders the STAR test: “It’s not helpful to me as a teacher. Results come as an overall reading or math score late in the year. They don’t say in what specific areas my students need improvement.” Bernstein already uses numerous better and more reliable diagnostic tools.

Dana Morelini, a second-grade teacher and member of the

Petaluma Federation of Teachers, testified before the Senate Education Committee in the state Capitol to urge support of SB 740.

Morelini has taught English learners in Title 1 schools as well as English-only students for 12 years. She currently works at McNear Elementary, a California Blue Ribbon Distinguished School. “While there are many inequities, both groups of children face similar setbacks and consequences from STAR testing due to their age,” explains Morelini.

Young children are still emergent readers and concrete thinkers. The test has a lot of abstract questions that go beyond their levels. They get easily frustrated. — Stephanie Bernstein, Second Grade Teacher, M. Pauline Brown School

Students repeatedly break pencils, complain of headaches, request frequent bathroom breaks and “exhibit types of anxious behavior markedly different” from when she administers other assessments. “None of us believe it was ever really the intent of the California Legislature to deliver an assessment that has created undue stress, fear and doubt in our youngest learners.”

Neither Morelini or Bernstein are opposed to testing students. They call for age-appropriate and reliable diagnostic tools to help them identify what their students need. They want the money saved by eliminating the STAR test to be invested in class size reduction, professional development, and other programs to help children learn and teachers teach. “We have lost the ability to work with children frequently as individuals and in small groups. We have fewer days to make a significant impact on their learning,” explains Morelini.

Yet in California, SB 740 failed to get out of legislative committee, despite potential annual savings of more than $2 million that could be better spent to educate young learners, and despite backing of educators, Torlakson, the California PTA and California School Boards Association.

Ravani says legislators focus on replacing the STAR test. “There’s a mindset that only a commercial program will satisfy school needs. But we don’t need to buy a commercial test,” he said. “Teachers already use assessment tools that more adequately measure student progress.”

Seattle’s Garfield High School teachers made the momentous decision in January to refuse to administer the state-mandated Measures of Academic Progress (MAP) test — and it began with a discussion in the teachers’ lounge.