A Blue Wave — only if we make it happen 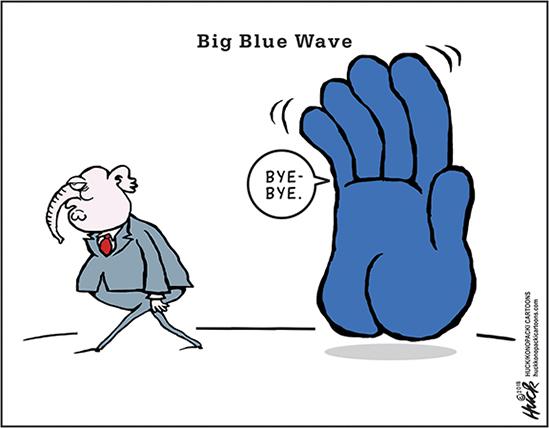 Years back, my family took a trip to Hawaii. While there, Japan suffered a serious earthquake and we were told to prepare for a tsunami that never materialized. Like the one on my trip, the “blue wave” that could give Democrats a majority in the House and possibly the Senate, might be just as illusory as our Hawaiian experience. Unless we help make it happen.

If eligible voters don’t turn out in big numbers, there will be no blue wave and Democrats are less likely to reclaim the House or Senate.

There is so much at stake in November, one would think that getting people out to vote should be easy. Yet systematic efforts to disenfranchise people of color coupled with the general difficulty in motivating people to vote in mid-terms present an enormous challenge.

Particularly in a state like California where a growing percentage of the population are younger, people of color, and likely more liberal, lack of turnout is like boxing with one arm tied behind one’s back.

A good turnout in November will also be essential if we are to get Tony Thurmond elected Superintendent of Public Instruction. Thurmond’s challenger, Marshall Tuck, is backed by tens of millions of dollars from the Charter School Association. However, by mobilizing our base, we can minimize Tuck’s financial advantage.

In addition, we have targeted seven Republican congressional seats. These seats are essential in achieving the 23 necessary to reclaim Democratic control of the House. Without winning California seats, it is hard to see how Democrats retake control of the Congress.

We know that deep-pocketed, far right interests will attempt to tamp down our turnout while encouraging their base to turn out. That is a central part of their strategy because the Koch brothers and their allies know they hold minority views on key issues like privatizing Social Security and Medicare.

“A good turnout in November will also be essential if we are to get Tony Thurmond elected Superintendent of Public Instruction. Thurmond’s challenger, Marshall Tuck, is backed by tens of millions of dollars from the Charter School Association.”

But the Supreme Court’s Citizens United decision opened the door to unlimited amounts of money being spent on elections and influencing the democratic process. The deep-pocketed interests that use Citizens United to “buy” elections have announced plans to spend $400 million to win races this November.

That’s why it’s essential our members flex their electoral muscle by working on campaigns to counteract the influence of Koch brothers’ money.

Whatever our views of the Democratic Party might be, we must see that the primary threat comes from a Republican Party that has been captured by the far right. Their promotion of divisive issues threatens to return this country to a time of legal segregation, back alley abortions, and the robber barons of the 19th century.

While turnout in the recent California primary did mark an increase over previous elections, it falls far short of where it needs to be if we truly want to have representative democracy.

If we stumble this November, the reelection of Trump in 2020 becomes more likely and that’s a scary proposition.

Our job now is to block the right-wing trajectory of our country while helping to move the Democratic Party in a more progressive direction. Taking back the House and possibly the Senate in November will help us block Trump, but it will take our members working to make that happen. By so doing, we will lay the basis for a much-needed change in the White House in 2020.

There is too much at stake to fail.

> Please be involved. And vote. Find the CFT endorsements in our online voter guide. Our voices need to be heard now more than ever.