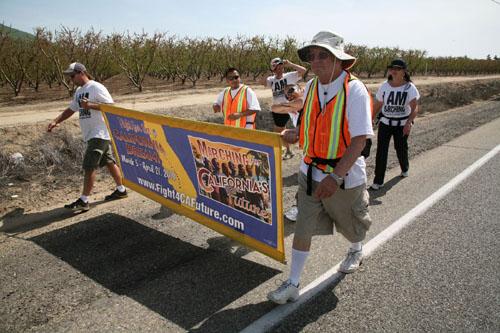 DELHI, CA (4/3/10) — Evenings in the San Joaquin Valley have grown warmer as the marchers for California’s future head for Sacramento. At the journey’s start in Bakersfield and Shafter, even the days were cold. But as night settles into a campground beside the Merced River just north of Livingston, you can feel spring is in the air.

Gavin Riley can be happy about that. Retired from 37 years in the ABC School District, in the southernmost part of Los Angeles County, he’s glad he spent 20 of those years teaching physical education in middle school. “That’s one thing that made it easier to do this march,” he says. At first he wondered whether he’d have aching joints and blisters, but now he easily takes each day’s walking as it comes.

The march has shown him a side of California that he may have known existed in theory, but has brought him face to face with it in reality. “This isn’t just a march for California’s future,” he explains,” but also a march through California’s past, both the labor history and the social history. We visited Allensworth, a town that was built by Black people because they weren’t welcome in other communities. Now it’s a state park, but it’s been closed by the budget cuts. We’ve visited many farm communities that seem like they’re suffering grievously. Deteriorating roads. The great California water project that was built to make the San Joaquin Valley bloom is falling apart in places from lack of maintenance. We’ve seen boarded up homes everywhere. We’ve seen farms where the land lies fallow and the trees have been allowed to die.”

A few days ago, as the marchers walked into Fresno, the extent of the economic crisis shocked them. “We walked through a Skid Row type area, where people were living in cardboard and wood shacks underneath a freeway, and sleeping on the sidewalks. But when we got into some of the suburbs of Fresno, we found homes like you’d expect to see in Beverly Hills. You can see that the economy right now is not working for everybody.”

What got Riley marching wasn’t just the polarization of California between rich and poor, but the lack of will by state legislators to do anything about it. He remembers a different California of his youth. “I view myself as a legacy of the California system when it worked,” he remembers. “I went to school in the 1950s when our school system was ranked as one of the best in the nation. When it was my time to go to college, it was free at the state university system. The theory back then was that if we had an educated electorate, they’d be more productive, more supportive of the state, not in trouble. I think that worked. They gave me a free education, and I came back and worked my entire life in the state. I’ve owned businesses here. I’ve taught in our schools. I think I’ve more than returned the investment. But we’ve kind of lost track of that. At one time we were a selfless society in California. We seem to have become more selfish. That’s unfortunate, because we’re losing track of the dream.”

Although he’s retired from teaching now, he’s still the chief contract negotiator for his union, the ABC Federation of Teachers. And the experience of trying to cope with the way that the effects of economic crisis have been multiplied by legislative gridlock in Sacramento convinced him that drastic action had to be taken. “I find it very hard to go into negotiations every year talking about saving jobs or increasing class sizes, potentially closing schools, and fighting rearguard actions against all the things that we’ve fought to avoid all these years. I don’t want to deal with that.”

Going on the march was an answer, because Riley believes it will convince even the parents of his own district of the gravity of the crisis. “I frankly think our parents are not aware of its depth at this point,” he cautions. “I repeatedly send articles to the local newspaper, saying we just can’t continue down this road. The public seems to think that the only problem we have in public services everywhere, whether it’s taking care of our schools or our elderly, is the need to be more efficient. But you can’t be more efficient when you’re slashing, $17 billion from the education budget. That’s not something you can solve by saving on paperclips. Schools don’t waste money. They’re audited continually. Certainly I watch our district’s budget like a hawk, and if I see any expenses that are unusual, I’m the first to raise a question. I actually think the Governor might be doing us an unintended favor when he tells districts to reduce the school year by five days. Then all of a sudden parents begin to grasp the gravity of the problem.”

He sees the march as a spark that can ignite the smoldering anger of parents in his district, or the people living in shacks beside the roads the marchers see almost every day. “I think we’ve reached a tipping point,” Riley predicts. “We have legislators in Sacramento who have greater loyalty to their political party then to the state and its people. That’s disgraceful. The only thing that’s going to change it is a groundswell of anger from the public. Then maybe some of these politicians will realize that their job may be in jeopardy.”

Is that happening? Riley points to the rallies that have greeted marchers in small valley towns, and their reception when they collect signatures on petitions in front of grocery stores and malls. Madera’s newspaper hadn’t carried a labor story in years, and the march made the front page two days in a row. “We think we’re beginning to see the snowball effect that Cesar Chavez had back in 1966, when he marched right up Highway 99 from Delano to Sacramento, and told everybody driving down the road that there was something going on and they needed to pay attention to it. That’s what we’re trying to do.”

He looks especially at the college students the marchers have been meeting at community colleges, state university campuses and UC Merced – the only UC campus in the central valley. Rising fees, unavailable classes and shrinking financial aid are putting them in the budget crosshairs more than most people. Yet, Riley says, he’s often bothered by how few students are even registered to vote.

“We’re circulated the petition to get the majority vote on the budget – we’re one of only three states that have this two-thirds rule. That would go a long way towards helping students solve their problems. But it’s of no value to get something on the ballot if you can’t pass it. And if you’re not registered to vote, politically you’re a non-person. I’d think that every college student should be registered and go to the polls and vote. If you’re an effective bloc, politicians will take notice.”

Sacramento is less than three weeks away now. For Riley, that will be the final test of the march’s effectiveness. “Politicians are swayed by crowds,” he feels. “If there’s an angry group out there, they can’t ignore us. You put a life’s work into public education, to make it as good as it can be, and you don’t want to see it dismantled, the way it’s being dismantled today. That’s why I’m out here. I don’t think it’s a hopeless situation. But I do think we need to make some changes.”