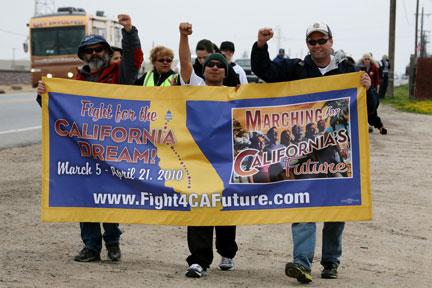 SHAFTER, CA (3/6/10) – As the March for California’s Future left Bakersfield and headed up the San Joaquin Valley toward Sacramento, community college instructor Jim Miller was still energized by the March 4 Day of Action to save public education. That day students, teachers and community activists had demonstrated and protested around the state, with the largest rally in Los Angeles. The marchers stepped out on the road the following day, after a similar rally in Bakersfield.

“I was hoping the LA rally would be good, and it was spectacular,” Miller recalled. “The church holds a thousand, and there were hundreds more trying to get in. The energy was incredible.”

Miller counted three buses of students from San Diego Community College, where he teaches labor studies, who came from to the Los Angeles rally. “In Bakersfield, people were waving from their houses and came out and joined – I don’t think that’s something that happens much in Bakersfield.”

The close relationship between teachers and home care workers on the march reflected the spirit of the joint struggle against the impact of California’s budget crisis. “As inspiring as March 4 was, it was a one-day thing. I hope the march is a way to take a seven-week approach, a long sustained conversation with the people of the state of California, trying to raise the most difficult issues. Like, we’ve got to raise revenue someplace. If we don’t raise revenue, we’re at the point where the choices are stark. We’ve got to do something to address the two-thirds majority rule. If we don’t do it, we’re going to be in permanent gridlock.”

Miller explains the severity of the crisis as it affects education. “Over $8 billion has been cut from education in the last year, in San Diego alone $52 million. Statewide we’re serving over 200,000 students we’re not being funded for. We’ve had to lay off scores of part time instructors. My job is to serve our students and I’m unable to do this. Community colleges are the most accessible door of opportunity for working class students and particularly communities of color in California. We’re witnessing the destruction of the California dream in regard to education.”

But Miller is also proud that the demands of the march go beyond saving education, to “fighting for an economy and a government that works for everybody. We’re not saying save education by throwing old people out of their home care, by getting rid of health care for poor kids, by closing down state parks or privatizing prisons. This is about the future of the state of California.” Without such unity, he says, “we’ll see a scarcity model, where people say ‘take someone else’s piece of the pie, not mine.’ That’s where we’d go, and it’s a race to the bottom in every way.” 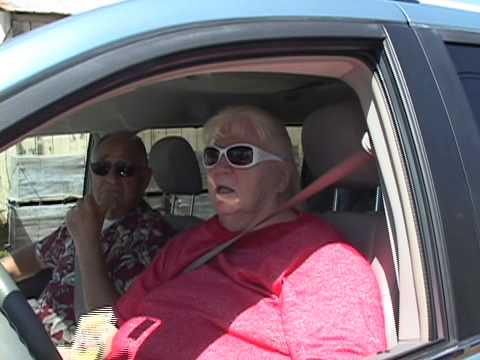 For his part, Moore credits teachers, and the CFT in particular, “for taking a bold step and then reaching out and saying, ‘we need other people.’ If they hadn’t taken that step, we’d all probably be working the same way we always have, in our silos. And what you see on the march here is, no silos. This isn’t just about public education; it’s about public services and a fair tax system. As long as we stick to that, this coalition will continue to grow.”

Miller agrees. “We want to save the entire social contract in the state,” he explains. “What’s inspiring people is that different unions, different communities are talking to each other, in a shared struggle against the decimation of the future for the vast majority of people.”

As a labor studies instructor and longtime union activist himself, Miller believes the march to Sacramento touches an historical chord, reaching back to the seminal marches by the United Farm Workers in 1966, and then again in 1994. “I think about what those marches did for the farm workers, in terms of insisting on basic human dignity,” he recalls. “So I think in that sense, we’ve chosen the perfect place to do this. Plus, look at what’s going on in my profession, education, and what that means for opportunity. Access to affordable education is a civil right. The purpose of this march is to make that more evident to the public. We had non-violence training from the Southern Christian Leadership Council in Los Angeles, and it was also good to feel in some small way part of the legacy of Dr. King.”

Moore also sees a connection to the history of civil rights and the UFW. “Our union was born out of the farm workers’ movement,” he explains. “It was Cesar Chavez’ idea, and we have a very close and personal relationship when it comes to farm workers. We’re about activism and building community alliances and sustaining them, not just to get what you want, but to help other organizations when they need something.”

The UDW intends to use the march to strengthen those relationships, in an area of California with a very conservative image. “People in the communities we’re walking through will be supportive if we build relationships. Whether you’re conservative or not, you’re hurting because of the decisions the governor and some of the legislators are making. As we walk through, if we’re registering people to vote, educating them on the issues at hand, organizing town hall meetings to hold elected officials accountable, we’ll have an impact. We’re going to follow up with the community groups we’ve contacted, and be there for them. It’s a people’s march.”

Moore emphasizes that in small San Joaquin Valley towns, the budget cuts on the table in Sacramento could even lead to the elimination of the home care program itself. “And our members would end up on unemployment. People would lose homes. In California we have record unemployment. Now you’re talking about another 350,000 people going on unemployment. The governor’s budget solution is not a solution. It’s a disaster.”

Both Moore and Miller feel personally motivated to march, in addition to their larger political goals. “One of my sons is a school teacher who just got his pink slip in Claremont,” Moore says. I have a daughter who’s a senior at San Diego State, and she participated in the actions there. She needed a particular class to graduate in May and that class was eliminated. They know I’m walking and they love it. I’m doing it for them. I’m doing it for my granddaughter. I’m doing it for the future generation of California. We have to show them that you don’t have to accept the status quo. You can actually change it through collective action.”

Back in San Diego, Miller’s wife Kelly Mayhew, also a teacher at City College, has taken over part of his teaching load, and the full parenting responsibilities for their six-year-old son. “She was very emotional when I left,” Miller recalls. “That part of it’s hard. And of course I’m 44 years old, soon to be 45, with a bad back and asthma, so it’s probably not the best time in my life to choose to walk 260 miles. But really in the big picture, it’s a small sacrifice in comparison to what’s at stake.”

Miller got a lot of support from others in his family as well, “including some family members who don’t share the same political perspective. Even the Republican side of the family was saying, ‘Good luck! It’s a good thing you’re doing. We’re proud of you.’ I think people understand that we’re trying to do something for the future of my kid and for the future of our neighbors’ kids.

“But I’m not just marching so that my son, the son of two community college professors, can have fewer kids in his class. If we don’t do something in some of these where we’re marching, communities where the average income is as low as $5000 a year, if we don’t do something for the children of those workers, then we’re going to have to build more and more prisons, because there’s going to be no future for them.”

So far, the response from local people has been very supportive, Miller and Moore agree. “Even here, in one of the most desolate stretches, cars are honking their support. I thought we might get some of the rightwing backlash – tea baggers giving us the bird out the window – but I haven’t seen any of that.”

Most of all, Miller is proud of the impact the events of recent weeks have had on his own students. “They’re educating themselves,” he enthuses. “They have a remarkable understanding of what’s going on. It’s inspiring to see how sharp they’ve become on arcane matters, like split roll tax and oil extraction tax. As bad as the situation is, that’s a hopeful sign I think.”