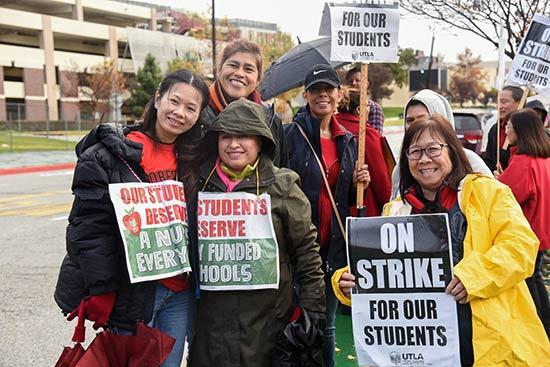 The historic agreement includes many of the key goals brought by the UTLA bargaining team, including strong language reducing class size, increased staffing of nurses, counselors and librarians, limits on testing, and the establishment of community schools.

The successful UTLA strike was only possible because of the courageous stand of over 30,000 LAUSD educators who were willing to put everything on the line for their students and their schools. The tremendous resolve of these educators, and the parents, students, and supporters who stood with them, shows the power of communities rallying behind their public schools in the face of great odds.

Thanks to the thousands of CFT members and supporters who signed the CFT petition urging the LAUSD to settle the contract, and to those who gave their support on the picket line and via messages of solidarity on social media. We have received word from UTLA members that the tremendous outpouring of support from across the state and nation helped sustain them on the picket line.

Time to fully fund our schools

The impact of the successful UTLA strike goes far beyond the boundaries of the Los Angeles Unified School District. The successful strike also represents a sea change for the state of California, as there is now strong momentum to raise critical revenue for education that reflects a broad commitment to fully fund our public schools.

“The state must act. California is the 5th largest economy in the world, but we are a dismal 43rd in the nation in per-pupil spending. Without fully funded schools, California students will continue to be denied the education they deserve. And without dramatic action in Sacramento, teachers and school workers will likely be out on the picket line very soon in school districts throughout the state.”

A great place to start addressing the underfunding of our schools is the Schools and Communities First initiative. Along with community and parent allies from throughout the state, the CFT was instrumental in qualifying the initiative for the November 2020 ballot. The initiative would close a loophole in current tax law that allows legacy commercial property owners to evade paying property taxes based on fair market value and would restore more than $11 billion per year to California schools, community colleges, health clinics, and other vital local services.

But we should not stop there. All options to bring stable, long term revenue back to our schools and colleges must be considered, including taking a strong look at the carried interest loophole and other corporate tax breaks that funnel money out of our schools in order to pad corporate profits.

We heartily congratulate our sisters and brothers who went on strike and won for public education in Los Angeles. Now, we must all stand united to demand fully funded public schools for every student in California!