CFT President Joshua Pechthalt was honored Thursday, May 23, 2013, by the UCLA Center for Labor Research and Education, at the Center’s annual banquet, for his work to help pass Proposition 30 in November 2012.

Following are Pechthalt’s remarks upon receiving the award. 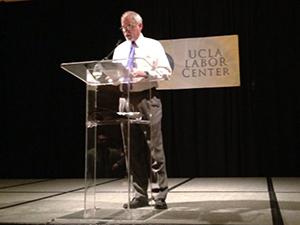 Thank you very much for this wonderful award and to be recognized with Sen. de Leon, Assemblymember Mitchell and brother Hansen.

At a time when public education has been under attack and education unions in particular have become scapegoats for an education crisis borne of lack of decent jobs, poverty and the elimination of social services in poor and working class communities, I am honored to receive this award on behalf of the California Federation of Teachers, our leadership, members and staff, including our Secretary Treasurer Jeff Freitas, for making a difference in the lives of children and young people.

California’s public education system has been a major part of my life. I am a product of the Los Angeles Unified School District and also taught history and social studies for more than 20 years at Manual Arts High School. I have attended community college, the Cal State system and graduated from UC Santa Cruz. My daughter Danielle, who is here with my wife Lynn Kersey, is an eighth grade student in LAUSD.

I started teaching in 1984 and immediately got involved at United Teachers Los Angeles—the second largest teachers local in the country. Over the course of 20 plus years, I was active at every level of the union from building rep, committee chair, strike cluster leader, member of the House of Representatives and Board of Directors, and finally an officer for six years.I am still a dues paying member of my local as well as the CTA.

In 2011, I had the honor of being elected president of the CFT and was reelected this past March.

The CFT has a proud, progressive tradition within the labor movement. We were one of the first unions to oppose the war in Vietnam and have been consistent in promoting democratic movements around the world. We have always been active in supporting a comprehensive vision of public education as well as seeing that the fight for quality public education in particular cannot be isolated from the struggle for improving the lives of working people in general.

We saw our work in advancing the Millionaires Tax and then Proposition 30 as part of our ongoing effort to promote economic justice and tax equity. We knew then, and feel more strongly now, that the effort to improve the lives of working and middle class families can only be achieved by building a broad alliance of labor and community.

Our work on the revenue measures was a vindication of that view. We worked with a number of community groups but I want to give a shout out in particular to the Courage Campaign, California Calls, and ACCE. I appreciate the fact that the CFT is being recognized for our work on Prop 30, but had it not been for our community partners we would not have been successful.

I think many of you know that the CFT was under enormous pressure early on to drop our Millionaires Tax and join with the governor in supporting his measure. But we, along with our partners, held our ground until the governor agreed to work with us on a compromise measure. Had we not held out for a more progressive measure, I think it is fair to say that Prop 30 would not have passed.

The success of Prop 30 was also a message from California voters that after 30 years of Prop 13, the time was right for progressive tax reform. Despite fears stoked by anti-tax forces that Prop 30 would spark an exodus of the state by the wealthy and the corporations, in fact the very opposite has happened. Tax revenues have increased dramatically and the outlook for our public schools is much healthier.

It is important to note that in spite of this improved economic climate and having a Democratic governor and two-thirds control of both houses of the state Legislature, we are hearing notes of caution coming from Sacramento. If Prop 30 proved anything, it’s that we have to get out of our political comfort zone.

The far right understands well the use of power as we have seen in Wisconsin, Michigan and elsewhere. It important that we use the power California voters have given us to make their lives better. There is no political overreach when the policies and tax measures we advocate for benefit the 99% and not the 1%.

But the work on Prop 30 was just the beginning. The CFT is working with our community partners on a statewide grass roots campaign for quality public education that can begin to turn around the narrative on public education. It is unconscionable that California, while being the eighth largest economy in the world, continues at the bottom of the United States in per pupil spending, class size average and many other indicators. We can and must do better.

The CFT can’t make this change alone. We need support from all of the unions and community organizations in this room. We need the support of parents and students. We need to build a movement for quality public education. And we need to overturn pro-corporate tax policies like Proposition 13, and make corporations pay their fair share.

We are proud to work with the UCLA Labor Center and have many of their instructors, like Kent Wong, as members and leaders in the CFT. We are working with our friends in the state Legislature to restore the funding that was stolen by Gov. Schwarzenegger. It is a testament to the work of the UCLA Labor Center that you were able to beat back repeated attempts by Schwarzenegger to eliminate your program.

We are also very proud of the UCLA Labor Studies graduating class of 2013. It is a big accomplishment to graduate from UCLA, but it is even a bigger accomplishment to pursue a career that works for social justice, for worker rights, and for a better future for our state and country.