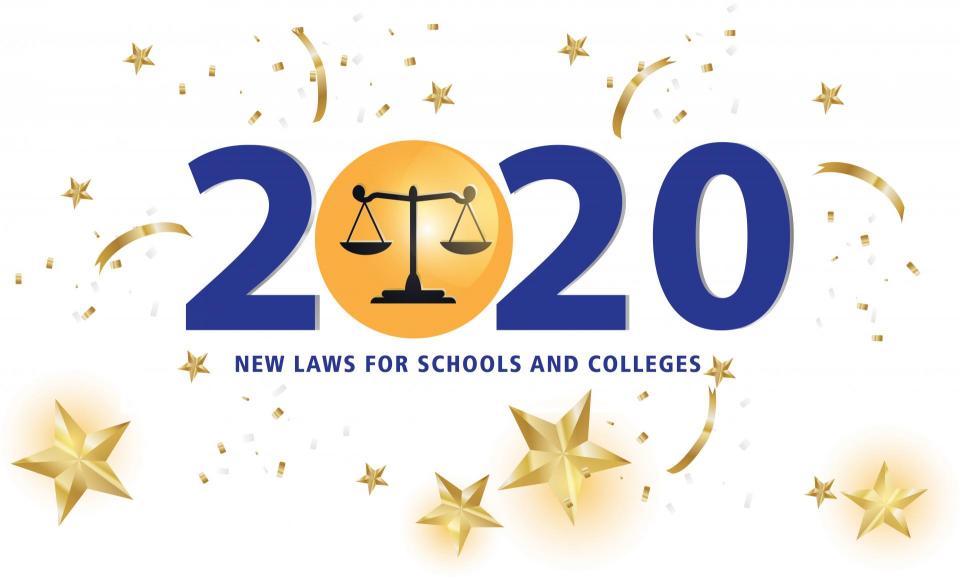 The governor signed eight CFT-sponsored bills from the 2019 legislative session into law, as well as numerous others important to educators and support staff in California schools and colleges. Below is a summary of significant bills that will become law in 2020. You will also find significant bills vetoed by the governor along with his veto message. The CFT positions are indicated. The next legislative session begins when the Legislature reconvenes on January 6, 2020.

The Public Preschool, K-12 and College Health and Safety Bond Act of 2020​
Assembly Bill 48 (O’Donnell, D-Long Beach) places a $15 billion statewide bond on the March 2020 ballot for consideration by California voters to fund new and renovate existing preschool through university facilities. The bond, if passed by voters, will provide $9 billion for K-12 school districts and $2 billion each for community colleges, the California State University and University of California systems. Position: Support

Requires standard certification for student immunization exemptions
Senate Bill 276 (Pan, D-Sacramento) requires the California Department of Public Health (CDPH) to develop a standardized medical exemption certification form to be used by licensed physicians, which beginning January 1, 2021, will be the only documentation of a medical exemption that is acceptable. The bill also requires the CDPH to review all medical exemptions from schools or institutions with an immunization rate of less than 95 percent, physicians who have submitted five or more medical exemptions in a calendar year, and schools or institutions that do not provide reports of vaccination rates to the CDPH. Position: Support

Student immunization exemption requirements continued
Senate Bill 714 (Pan, D-Sacramento) is a companion bill to SB 276 that aims to prevent fraudulent medical exemptions for mandatory vaccinations and makes further amendments to medical exemption requirements. SB 714 allows a child with a medical exemption, as of January 1, 2020, to continue to enroll in any public or private school, child care center, family day care home, or developmental center in the state until the child enrolls in the next grade span, which are 1) Birth to preschool; 2) Grades TK-6; and 3) Grades 7-12.

SB 714 also prohibits medical exemptions issued prior to January 1, 2020, from being revoked unless they are issued by a physician who has been subject to disciplinary action by a licensed board. The bill also removes the penalty of perjury provision of SB 276 for physicians signing medical forms. Position: No Position/Late Gut-and-Amend

Requires later school start time for many middle and high schools
Senate Bill 328 (Portantino, D-La Cañada Flintridge) requires the school day for middle schools and high schools, including those operated as charter schools, to begin no earlier than 8 am and 8:30 am respectively, by January 1, 2022, or the date in which a district’s collective bargaining agreement that is operative on January 1, 2020, expires, whichever is later. The start time restriction would not apply to rural school districts. Position: Watch

Collects data on school lockdowns and multi-option response drills​
Senate Bill 541 (Bates, R-Laguna Niguel) requires the California Department of Education (CDE) and local educational agencies (LEAs) to collect data pertaining to lockdown or multi-option response drills conducted at school sites within school districts, county offices of education, and charter schools. The bill also requires the CDE to conduct, or contract to conduct, a study that identifies, among other things, best practices for age-appropriate drills. Finally, SB 541 requires the data and the study to be submitted to the governor and relevant policy committees of the Legislature on or before November 1, 2021. Position: Watch

Shortens probation for classified in non-merit K-12 districts
Assembly Bill 1353 (Wicks, D-Oakland) shortens the maximum length of a prescribed period of probation from not exceeding one year to not exceeding six months or 130 days of paid service, whichever is longer. In addition, AB 1353 provides that, to the extent these provisions conflict with a collective bargaining agreement entered into before January 1, 2020, these provisions would not apply until the expiration or renewal of that agreement. Position: Sponsor

Improves Public Service Loan Forgiveness calculation for part-time faculty​
Assembly Bill 463 (Cervantes, D-Riverside) factors in part-time faculty preparation time and office hours in the calculation for qualifying for the federal Public Service Loan Forgiveness (PSLF) Program by creating a 3.35 multiplier to class time. In addition, AB 463 requires the chancellor’s office to develop and provide to community college districts materials designed to increase awareness of the federal PSLF program among faculty members. AB 463 also requires the governing board to annually provide this information to faculty members. Finally, AB 463 requires a community college district to annually provide a faculty member who is enrolled in the federal PSLF program with notice of renewal and a copy of the employment certification form with the employer portion of the form already completed. Position: Sponsor

Eases student apprenticeship program entry​
Assembly Bill 595 (Medina, D-Riverside) authorizes a student enrolled in a community college class or classes pursuant to an apprenticeship training program or an internship training program who does not have a Social Security number to use an individual tax identification number for purposes of any background check required by the class or program. Position: Co-Sponsor

Redirects funds to assist students in emergencies​
Assembly Bill 943 (Chiu, D-San Francisco) authorizes the use of Student Equity and Achievement Program funding for emergency student financial assistance to help students overcome unforeseen financial challenges that directly impact the student’s ability to persist in their course of study, such as the need for food or shelter. Position: Co-Sponsor

Requires designation of Dreamer Resource Liaisons
Assembly Bill 1645 (Rubio, D-Baldwin Park) requires the California Community Colleges and the California State University, and requests the University of California, commencing with the 2020-21 academic year, to designate a Dreamer Resource Liaison who is knowledgeable in financial aid and other support services to assist students who qualify for the exemption from paying non-residential tuition established by AB 540 in 2001. The bill also encourages the establishment of Dream Resource Centers on each campus. Position: Watch

Gov. Gavin Newsom also vetoed some significant bills. You can read his veto messages in the accompanying links.

Paid maternity leave for K-14 certificated and classified employees
Assembly Bill 500 (Gonzalez, D-San Diego) would have required K-14 districts to provide certificated and classified employees paid leave when an employee is required to be absent for a length of time to be determined by the employee and their doctor for a minimum of six weeks for pregnancy, miscarriage, childbirth and recovery. Position: Sponsor

Grade 11 assessment alternatives
Assembly Bill 751 (O’Donnell, D-Long Beach) would have established the Pathways to College Act which would have required the Superintendent of Public Instruction to approve one or more nationally recognized high school assessments (i.e., SAT or ACT) that a local educational agency could, at its own discretion, administer in lieu of the Grade 11 Smarter Balanced Summative Assessment. Position: Support

Training for mandated child abuse reporting at community colleges
Assembly Bill 1153 (Wicks, D-Oakland) would have established the Child Abuse Reporting Training Act of 2020 and required each governing board of a community college to 1) annually train, using an online training module, employees and administrators of the district who are mandated reporters on the reporting requirements; 2) develop a process for those persons to provide proof of completing this training within six weeks of each academic year or within six weeks of that person’s employment; and 3) develop a process to identify students who are minors enrolled in classes at a community college district and provide that information only to faculty members and other employees who are mandated reporters. Position: Sponsor

Required special education IEPs be translated into multiple languages
Senate Bill 695 (Portantino, D-La Cañada Flintridge) would have required a local educational agency (LEA), upon a parent’s request, to translate the following for a parent whose native language is one of the eight commonly spoken languages, excluding English: