Fixing the healthcare crisis Single payer system is the solution

Hundreds of union members, seniors, and healthcare activists attended a rally in downtown San Francisco for single payer healthcare, held outside a health insurers’ convention on June 19, 2008. Speakers like Hene Kelly of United Educators of San Francisco (listen to her four-minute speech below) urged support for single payer healthcare. Embodied in SB 810 in California, it would eliminate the insurance corporation middleman, which wastes an average of more than one quarter of every healthcare dollar for administrative costs and profits. 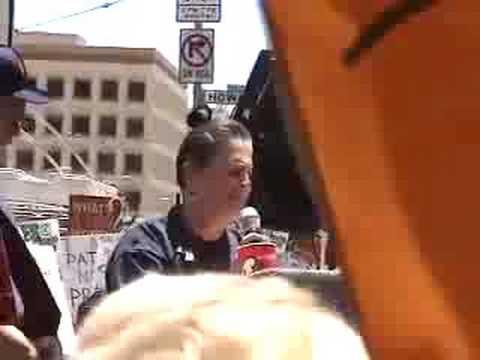 What can we do about the healthcare crisis?

There are two things we can work on right now in California to address the need for affordable, universal access to healthcare. We can educate the public about the best long-term solution, a single payer model for healthcare, and work to pass state Senator Mark Leno’s SB 810, which passed the state Senate and went to the Assembly on January 29. In the meantime, we can deliver as much healthcare coverage as possible to as many people as possible by supporting the work of the Health Access, the Education Coalition for Healthcare Reform, and the California healthcare Coalition.

Healthcare insurance costs are spiraling out of control. Forty seven million Americans are without healthcare coverage, including 7 million Californians. Premium cost increases are affecting the finances of schools (healthcare costs an average of 14.5% of payroll in California school districts today), and snarling collective bargaining. Corporations are forcing unions out on strike over reductions in or outright elimination of healthcare coverage.

The CFT believes that ultimately we need a single payer healthcare system, like Canada’s, to solve the problems created in this country by for-profit health insurance corporations. This would put the United States in the company of every other major industrial nation in the world, each of whom spend less per capita on healthcare than we do, while delivering universal access.

The CFT in 2006 endorsed the first version of state Senator Sheila Kuehl’s SB 840, ”Healthcare for All,” which would have established a single payer healthcare program in California. In an historic advance, SB 840 passed the state Legislature in late August 2006 — the first time a single payer bill has gotten that far toward law. However, Governor Schwarzenegger vetoed SB 840, proclaiming at the same time he was for universal healthcare, even as he refused to sign the only bill he’s received that would create it.

Senator Kuehl reintroduced the bill on February 27, 2007, and CFT reiterated its support at its Convention in March. See former CFT President Marty Hittelman’s speech at an SB 840 support rally on May 8, 2007. After Senator Kuehl was termed out, state Senator Mark Leno sponsored SB 810 to replace her SB 840 single payer bill.

Based on the Canadian model, single payer leaves healthcare provision in a mix of public and private hands, just as in the United States, but cuts out the wasteful health insurance industry, which takes between 25 and 30% of every healthcare dollar spent in the United States for administrative overhead and profit. In Canada, there are no uninsured; everyone has healthcare coverage. Is it a perfect system? There is no such thing. But is far superior by virtually every measure to the deteriorating system controlled by for-profit greed in the United States.

Right now the most important thing you can do is to tell your state legislators to continue to support SB 810, and also to support the legislature’s efforts to push through more modest and incremental but still significant healthcare reform bills. At the federal level, the CFT supports HR 676, which would create a single payer system for the country by expanding Medicare to all Americans and funding it adequately.

Whatever happens this year, the CFT and other education labor groups have joined in long-term efforts with administrative and school board organizations in the Education Coalition for healthcare reform to find a way to stabilize costs while increasing quality. The group is determined to address the systemic reasons for high-cost and low-quality healthcare, and committed to shifting from paying higher and higher prices to joint action against industry price gouging and poor quality healthcare. A similar effort is underway in the California Healthcare Coalition, a labor-led group which is seeking to make provider services data more transparent and accessible in order to bring greater accountability to treatment and payment.

You can be a part of the ongoing effort to achieve affordable healthcare coverage for all. Healthcare should be a right, not a privilege.